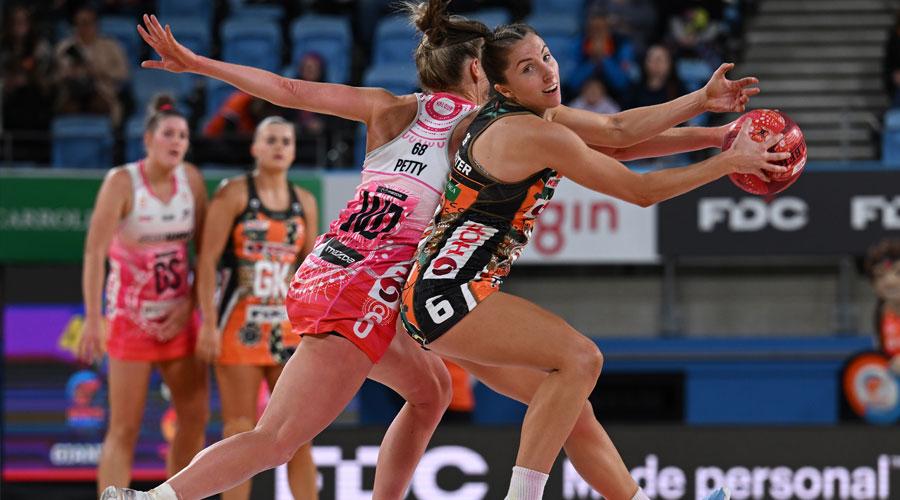 AS the race for the Suncorp Super Netball finals heat up, the GIANTS’ win over the Adelaide Thunderbirds yesterday was a crucial one.

Piling on scoring pressure from the get-go at one end, the GIANTS also suffocated the Thunderbirds’ ability to score up the other end.

Particularly towards the back end of the quarter, both of the Thunderbirds’ shooters did not look confident to take the super shots they really needed to, and so the Thunderbirds just fell further and further behind.

What did not help the Thunderbirds was that both of the GIANTS’ shooters found their range early, so looked ominous and were very hard to stop.

At the first change the GIANTS held a very comfortable 11-goal lead.

The GIANTS were able to maintain their dominance in the second term that they had earned in the first.

They continued to stifle the Thunderbirds in attack, while scoring with relative ease themselves.

There was a late flurry from the visitors, but as they teams went into the main break, the margin was still 14 goals in favour of the home side.

The third quarter saw a much better performance from the Adelaide Thunderbirds.

They played with more confidence and their advancements down the court was more free flowing.

This was also translating on the scoreboard. They brought it back to within nine goals during the quarter before the home side rallied and stretched the margin back out to 11 points at the final change.

Adelaide continued its fightback early in the last quarter.

The Thunderbirds were dialled in, and looked like they were going to stage one almighty come back.

They brought the margin back down to as low as six goals, but the GIANTS steadied and stopped the flow of goals.

The GIANTS’ maturity and experience really came to the fore and they stopped the flow of goals then rebuilt their lead back out to nine.

For the GIANTS, Sophie Dwyer found her accuracy from range early, which really sparked her side’s momentum.

Amy Parmenter led both the intercept and deflection count for her side, while Maddie Hay was a workhorse through mid court for her side.

Meanwhile for the Thunderbirds, Latanya Wilson recorded a whopping 11 deflections, while Shamera Sterling recorded seven of her own as well as five intercepts.

Next week sees the GIANTS in Queensland to face the Firebirds, while the Thunderbirds are back at home to host the Vixens.