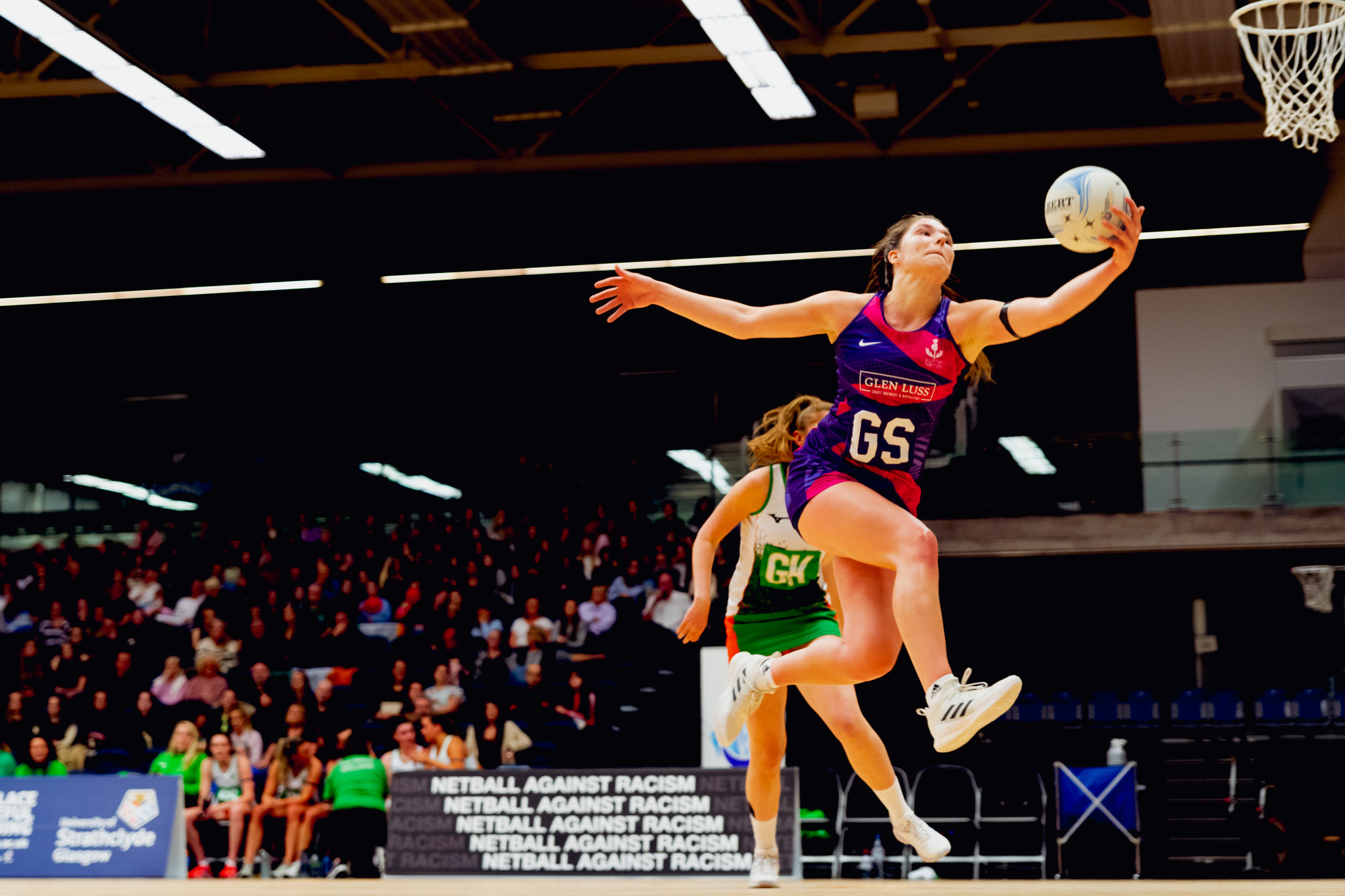 SCOTLAND showed no mercy against the Republic of Ireland in the Thistles’ first Netball World Cup Qualifiers match, dominating on day one with a 70-goal victory. With six teams in competition for two qualification spots, it was the home nation that put the foot down when it counted and ran away with a disciplined 87-17 victory. Their win was the biggest of the lob-sided day one results, with Northern Ireland defeating Gibraltar by 49 goals, and Wales getting up over Isle of Man by 56.

A dominant all-round, four-quarter performance from Scotland showed that the Thistles mean business in this year’s European Netball World Cup Qualifiers, taking care of Northern Ireland by 70 goals. It was a one-sided affair, and though the Emeralds had some impressive moments – and even consecutive goals at one stage – they could not score more than five a quarter, while Scotland scored 20-plus goals in each of its terms.

The experience of Scotland was on full display, with Bethan Goodwin – after missing a couple of early chances – stepping up and showing great confidence with her shooting. She teamed up with Niamh McCall and the pair’s fluent and high-volume scoring was on full display. Up the other end, Emily Nicholl simply dominated across the four quarters, teaming up with Rachel Conway in the first half, while Ireland looked to find its best seven.

Millie Cox was the first goal scorer for Ireland at goal shooter, and looks a promising talent. Though a confidence driven shooter, her positioning and holding was good, just needing to gain greater consistency with the execution. Eimhear O’Prey was doing well in goal keeper despite Goodwin’s dominance, with the Emeralds defence not really able to do much about the Thistles’ shooting circle. The Scotland midcourt of Hannah Leighton and Iona Christian was on fire, and after a 13-1 lead in the opening term, the home side headed into the opening break 20-3.

It was the story of the tape for the match, with Scotland taking control and really putting the foot down in a ruthless performance. A couple of Irish talents who really worked well was captain Fran Duffy (who rolled from goal attack to wing attack), vice-captain Erin Peters (wing attack to centre) and Corey McGlynn (centre to goal defence), who made a difference in the second term. Unfortunately the full court pressure from Scotland was forcing the Emeralds to make mistakes, but a highlight in the second term was a huge pass from Peters following a turnover, to hit up Cox in the goal circle.

Natalie Foster came on to replace O’Prey in goal keeper, with new Irish goal attack Erin Salako also firing off a couple of shots after some nerves. The Irish scored five goals in both the second and third terms, but ultimately, the combination of Leighton and Christian in midcourt was too strong. Claire Maxwell was anchoring the defence, and soon the Thistles brought on Kelly Boyle in centre and Hannah Grant in goal defence. Ireland used the match as a chance to test out as many possibilities as possible, and moved Aisling Sweeney into centre after a break, Beth Brennan into wing attack and Seren Redmond into wing defence.

The changes kept coming after the half-time break with the reliable shooting combination of Goodwin and McCall replaced by Emma Barrie and Cerys Cairns, Lauren Tait came on for Conway, Grant moved into wing defence and Boyle into wing attack. The third term was the best for the Irish as they actually scored two of the first three goals and Cox missed a chance to score a third goal early in the piece. From that miss, Scotland raced it down the other end and Leighton fed Barrie a beauty for the Shooter to punish the Emeralds.

Though playing a number of their second choice players, the likes of Barrie, Cairns, Boyle and Tait all had some big plays, and realistically are more experienced than the Ireland starting seven. The visitors brought on Foster for O’Prey – who would go into win defence in the final term – to deal with Barrie’s extra height. Another 20-5 term saw Scotland hit the 62-goal mark, with Ireland on 13 but having scored five goals in consecutive quarters.

The fourth quarter was simply sensational from Scotland who finished off the Emeralds with a massive 25-4 term, with the midcourt the only major changes for the home team. O’Prey went onto a red-hot Christian at wing defence and did a good job, but the likes of Boyle and Leighton were too strong through the midcourt. After not doing much of the shooting, even Cairns got in on the act late, taking the load in the final five minutes and putting plenty of shots up. By the final buzzer, Scotland had won 87-17, having piled on 14 of the last 15 goals in an ominous performance for the rest of the competition.

It was better news for Northern Ireland, who easily took care of Gibraltar, 68-19. Ciara Crosbie and Orlaith Rogers made the most of Warriors captain Caroline O’Hanlon experience and dominance in centre. Gibraltar, like Ireland had some moments and even lead the final quarter 4-2 at one stage, but could not make many inroads. Zainya Gillingwater was among her side’s best in goal defence during the 19-68 defeat.

In the other match, Wales made light work of Isle of Man, running out 78-22 winners in the first game of the day. The Feathers defence was credited for a strong start thanks to the pairing of Netball Superleague experienced duo, Christina Shaw and Ella Powell-Davies. Up the other end, Zoe Kirkham was lively for the Manx, but ultimately young gun Sarie Watkins and Phillipa Yarranton finished the job off.