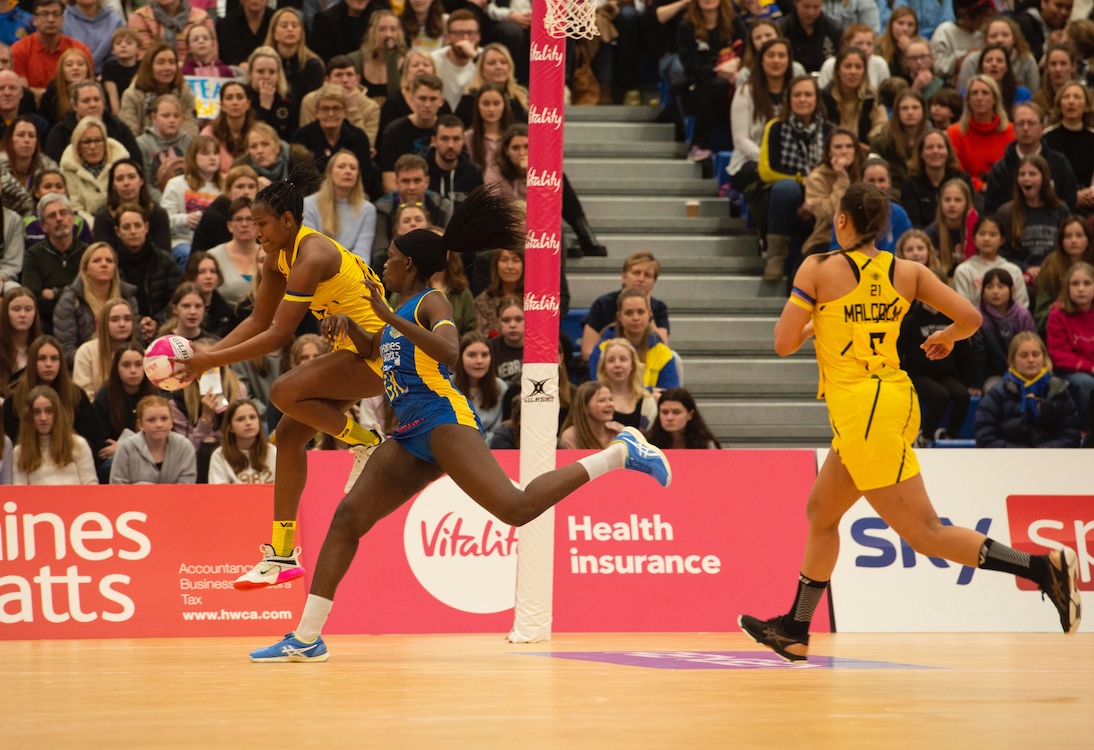 IT took until the last quarter, and was undoubtedly their greatest challenge of the season thus far, but Manchester Thunder remained undefeated in the Vitality Netball Superleague (VNSL) season. The Thunder won their seventh game on the trot, but it was the most nail-biting thus far. Though they had been pushed by Saracens Mavericks the week before, the Thunder found themselves trailing by three goals at the final break against Team Bath, before steadying with a super final term to run over the top of the home side and win by four goals, 57-53.

It was touted as a massive Friday night clash, and it certainly lived up to expectations, with the fourth placed Team Bath hosting the top of the table Manchester Thunder. Yet to lose a game all season, the Thunder headed into the contest as strong favourites with a 6-0 record, whilst Team Bath held a 3-2 win-loss record from the opening five games of the season. Fourth spot was also on the line, with a win to London Pulse today to effectively snag that finals position if Bath lost.

Bath started the game strongly in front of home fans, scoring 16 goals to 15 in the first term, and then 13 to 11 in the second to open up a 29-26 lead at the main break. Both side’s defences were on-point in the match, with another tight contest in the third stanza, with 13 goals apiece scored. It was not until the Thunder were truly on the back foot heading into the last, that the visitors found the gear that had helped them power away from opponents.

Manchester Thunder scored 18 goals to 11, to turn around a three-goal deficit and run out four-goal winners (57-53) in a memorable match. Captain Laura Malcolm lead from the front for the Thunder, picking up 12 feeds and eight deflections, working hard through the midcourt to play aggressive netball in both wing defence and centre. She was far from alone though, with Eleanor Cardwell (36 goals from 39 attempts) against dominant in the shooting circle, and Joyce Mvula coming on to fire all 18 attempts at 100 per cent.

Natalie Metcalf started the game in goal attack again to score three goals at 100 per cent, before heading back to her familiar wing attack position and recording a team-high 13 feeds. Kerry Almond and Shadine Van der Merwe combined for 13 deflections, six turnovers, two rebounds and an intercept in the defensive goal circle, with the latter having an impact coming on for Millie Sanders.

For Team Bath, captain Imogen Allison had a match-high 15 feeds, as well as a deflection, whilst goal attack Sophie Drakeford-Lewis recorded nine feeds, scored 20 goals and shot at 100 per cent. Also holding a flawless record was goal shooter Kim Borger (22 goals), whilst Rachel Shaw (10 feeds, two deflections and one turnover) and Layla Guscoth (six deflections, four turnovers, one intercept, one rebound and only five penalties) were also impressive despite the loss.

Manchester Thunder host Leeds Rhinos on Saturday, March 12 at AO Arena in their Round 7 clash, whilst Team Bath will have to wait until Round 8 to play next, when they do the double back-to-back, hosting both Celtic Dragons and Loughborough Lightning in Sunday and Monday fixtures on the weekend of March 13-14.