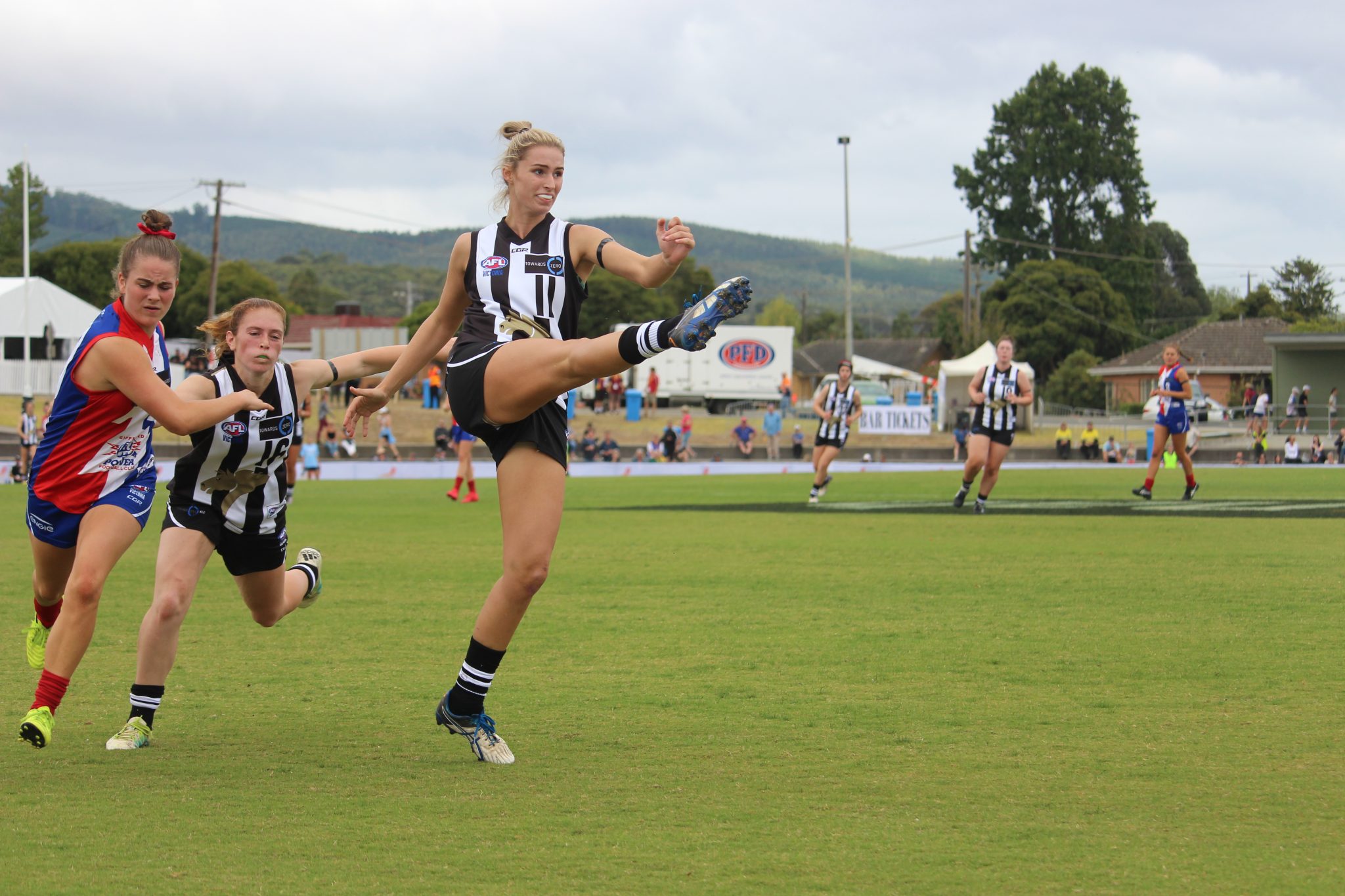 ALTHOUGH only relatively young at 21-years-old, Port Melbourne’s newest recruit Bridie Winbanks has had quite the journey. However, she is still determined to make it to the next level.

Winbanks started off her career as a 16-year-old, playing locally in Melbourne’s eastern suburbs. She then moved on to the NAB League Girls competition, initially playing for the Sandringham Dragons. She also spent time in the Oakleigh Chargers program before being scouted to Essendon in the VFLW.

Winbanks has spent the last three years at Casey before moving across to Port Melbourne ahead of the 2022 season. In addition to this, she has also been an AFLW train-on player with both Melbourne and the Kangaroos.

Initially she made the moves she did to get noticed to be drafted. Nowadays, although she still hopes to get drafted and is striving to do so, her priorities have changed.

“At the start yes it was,” she said of her draft goal. “Obviously Essendon, living in Oakleigh was a bit of a hike during year 12 and through VCE, and then Casey was through Melbourne.

“I was looked at by Melbourne for drafting, and then have now decided to move to Port Melbourne just as a change. “Closer to home as well and through working late hours and now just a whole great group of girls to be with.’

She said herself that her biggest strength is to her versatility. Not just skilled in her ruck work but the ability to get a ground ball or be an option further down the line.

This will hold her in good stead as AFLW clubs look for more versatility in their ruck stocks. Players who are solely rucks don’t normally get much of an opportunity these days, so the more versatile you are the better.

Despite this, there are still some areas she is looking to work on in her game. She is looking to improve on her ruck work and positioning around the game. She also wants to work on being a better option down in the forward line. This will improve her versatility and be an even more exciting prospect for any potential AFLW recruiters.

With many older AFLW rucks coming to the twilights of their careers, there is a need for younger, more readymade rucks to come through the AFLW pathway. Winbanks could be one able to realise her dream. 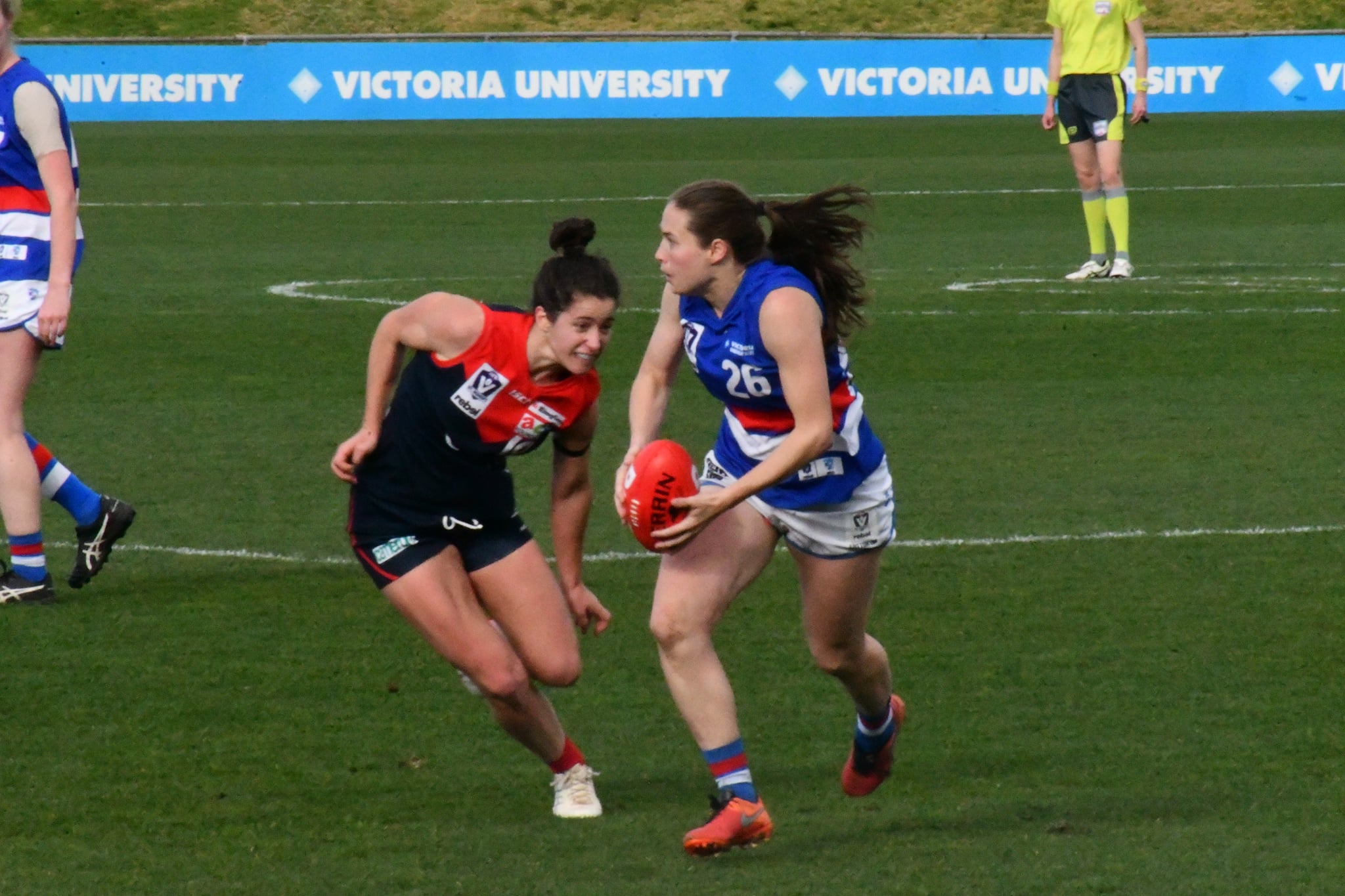 DANIELLE Marshall is a trailblazer. There is no other way to put it. Her journey to the top is one of the most unique in the AFLW. She is American, and was the first American born player to play in the AFLW competition for the Western Bulldogs. Her story begins in Arizona, playing with the […]

ALTHOUGH only relatively young at 21-years-old, Port Melbourne’s newest recruit Bridie Winbanks has had quite the journey. However, she is still determined to make it to the next level. Winbanks started off her career as a 16-year-old, playing locally in Melbourne’s eastern suburbs. She then moved on to the NAB League Girls competition, initially playing […] 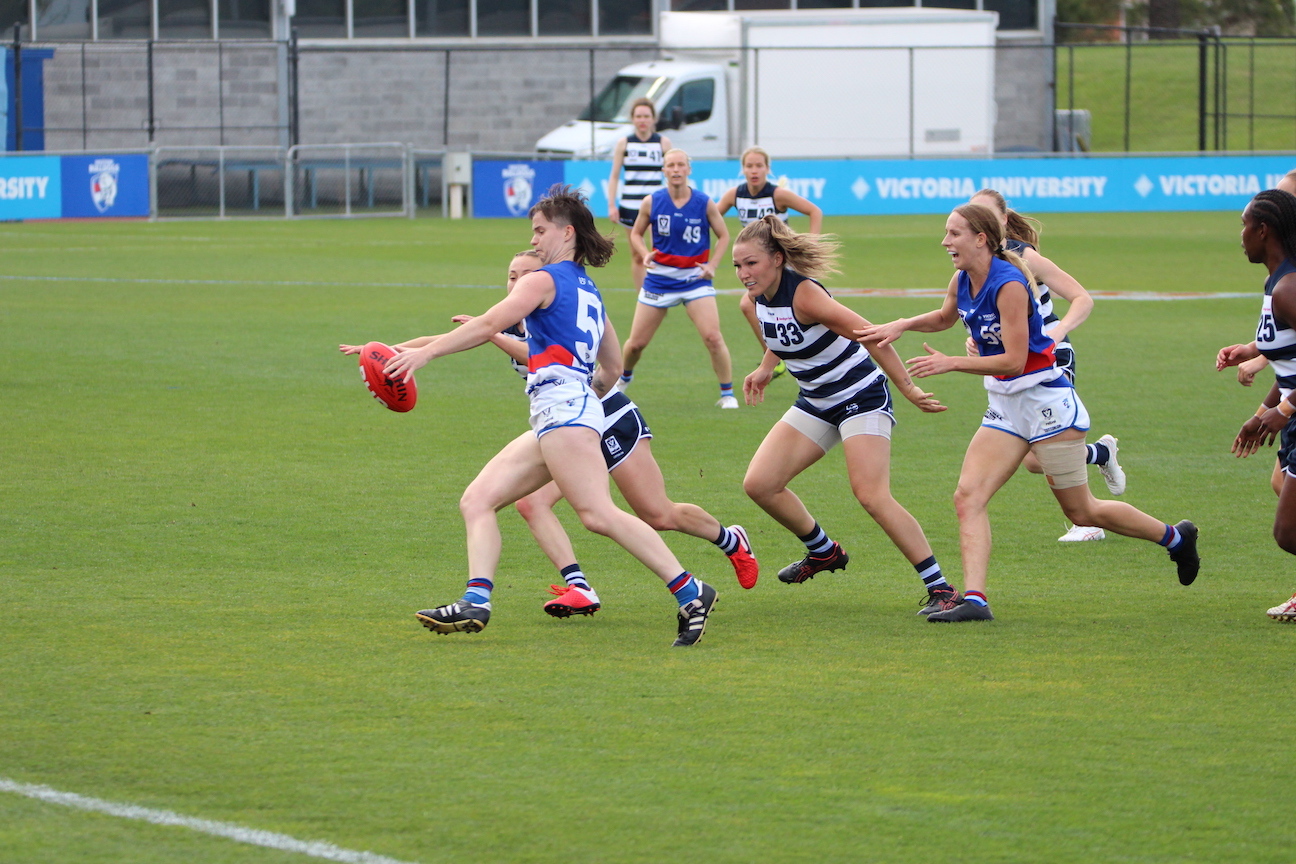 WESTERN Bulldogs’ VFLW skipper Riley Christgoergl‘s story is one of determination. After a year marred by concussion, she is coming back stronger than ever in 2022. She comes into 2022 with the hopes of being able to push on into the AFLW system and be drafted. “Absolutely. It’s the dream isn’t it? I’m working as […]

INTRODUCING Game Sense podcast, the newest women’s Australian rules football podcast thanks to Rookie Me Central. Hosted by Chief Editor Peter Williams alongside women’s football analyst Alyce Collett, Game Sense aims to bring you behind the scenes with the women’s development pathways and state leagues. From round reviews and previews, to player focuses and interviews, […] 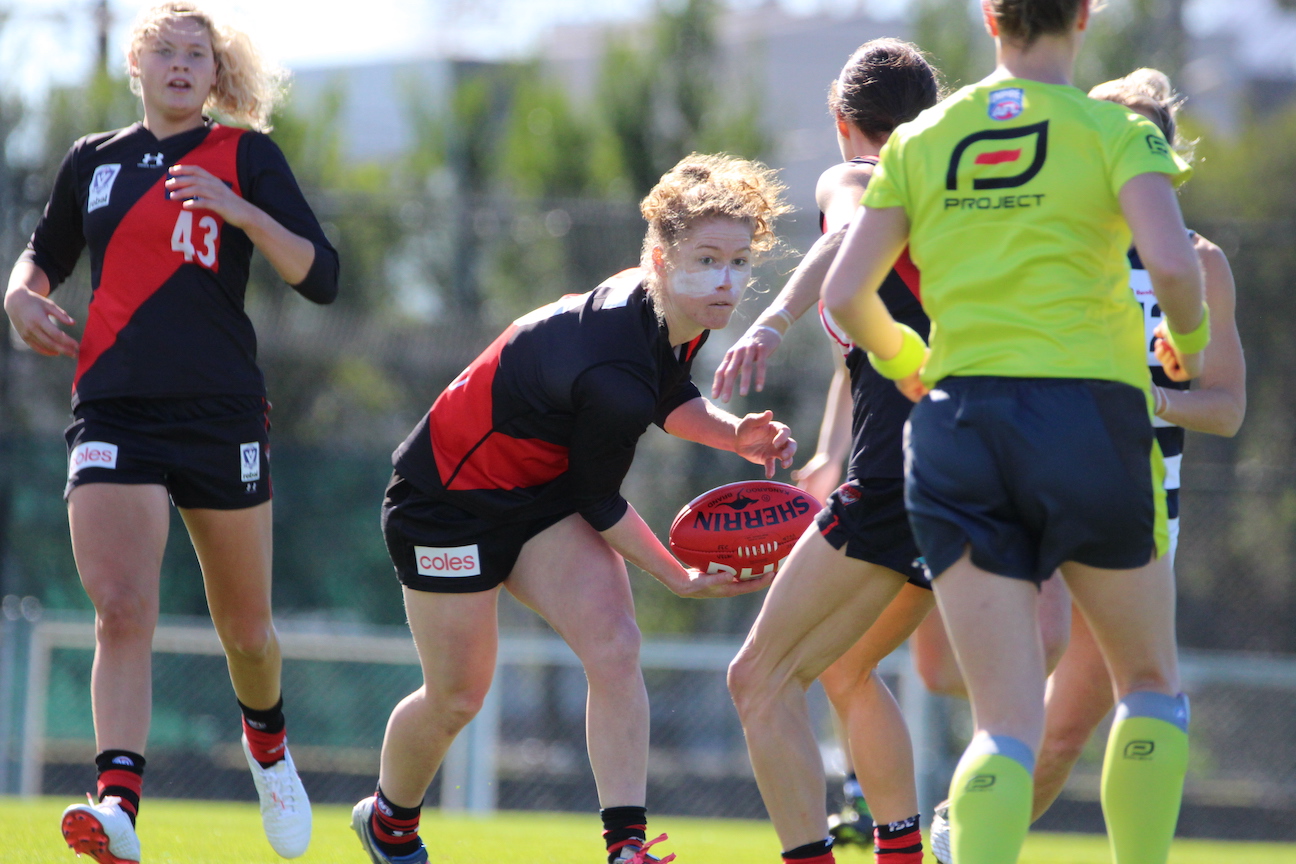 ESSENDON captain Georgia Nanscawen is the toast of the VFLW tonight, after winning the Lambert-Pearce Medal as the Best and Fairest of the VFLW for 2021. She finished on 17 votes, three votes clear of Collingwood skipper Caitlin Bunker, who finished second. Hawthorn’s Tamara Luke finished third on 11 votes, and there was a four […] 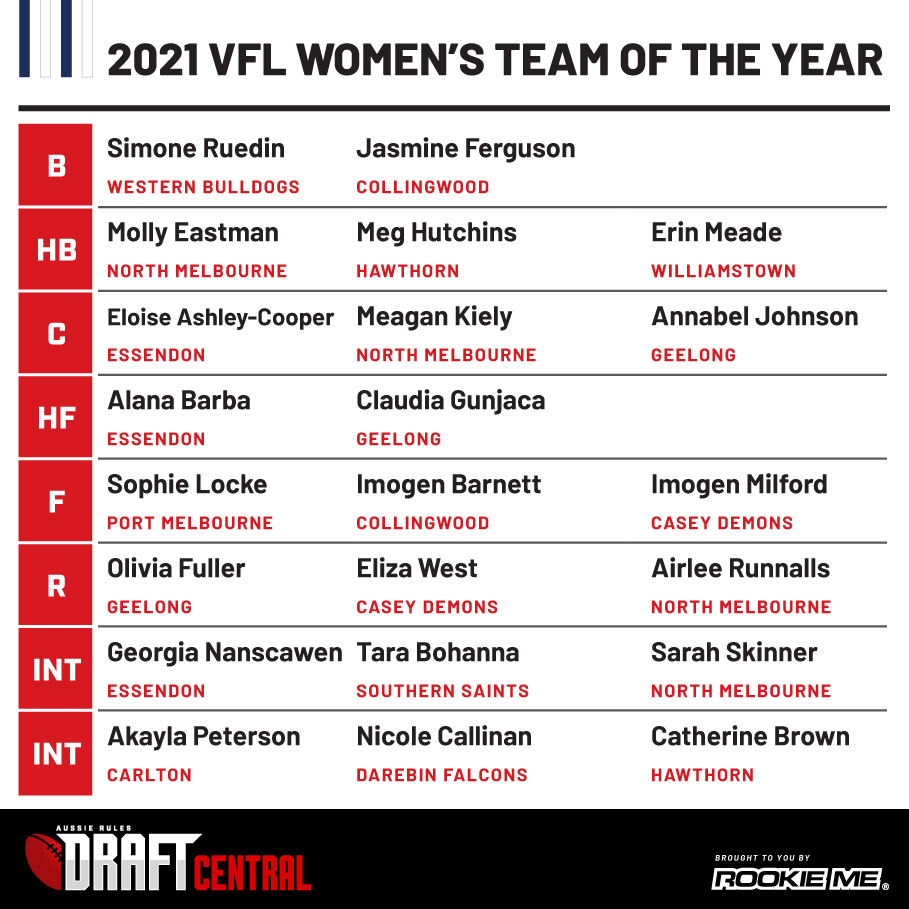 WHILE the 2021 Victorian Football League (VFL) Women’s competition could not quite have the full stop it desired in terms of a grand final, Draft Central’s Peter Williams and Women’s Australian Rules Football (WARF) Radio’s Peter Holden have combined to name a 2021 VFLW Team of the Year. As part of the Team of the […] 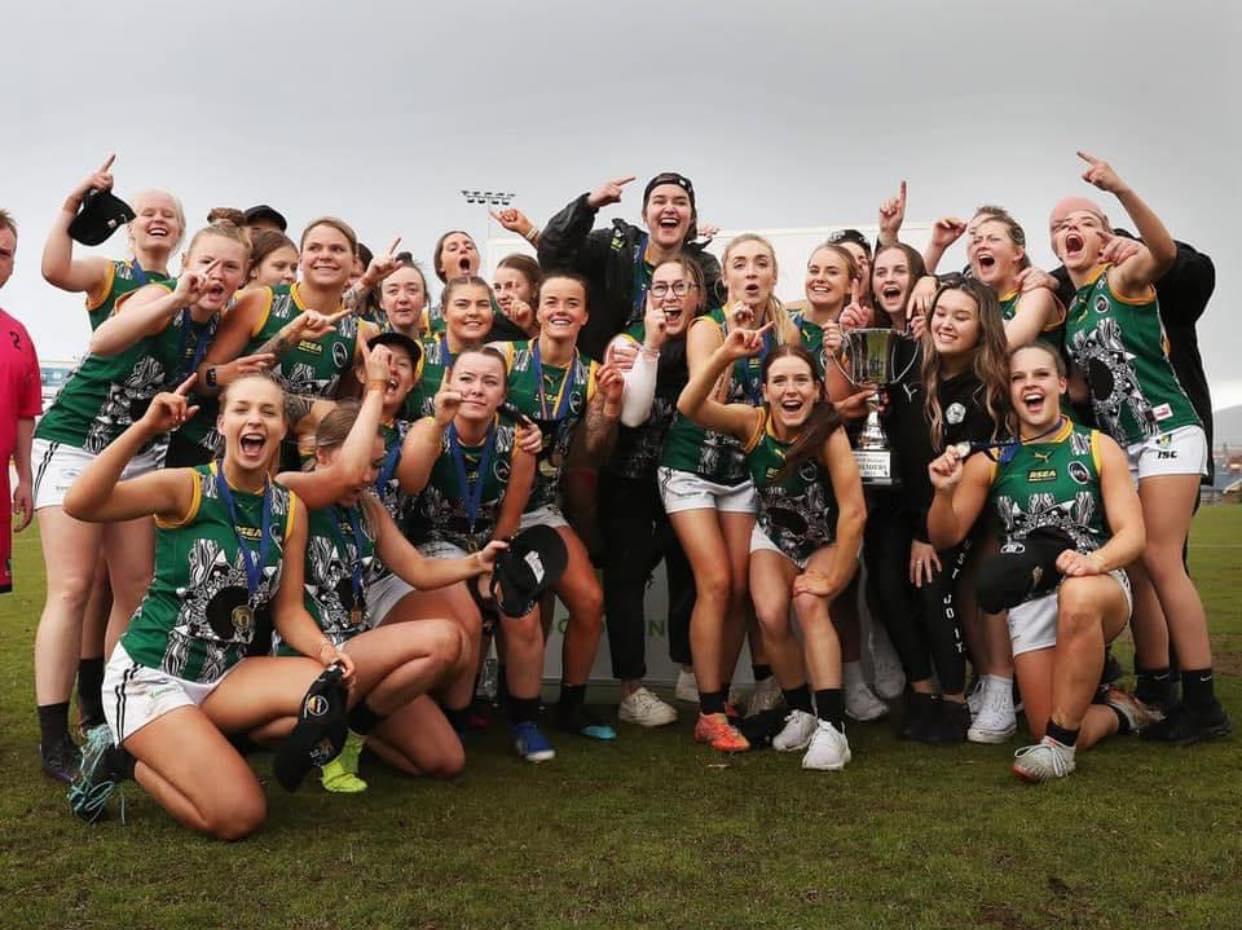 THE best of the best women’s football teams in Tasmania have been decided, with the Southern Football League (SFL) premiers Glenorchy taking on the Northern Women’s Football League (NWFL) premiers Ulverstone this weekend. The Magpies defeated Claremont in the SFL Grand Final last weekend despite only having 15 players onfield, and will be looking to […] 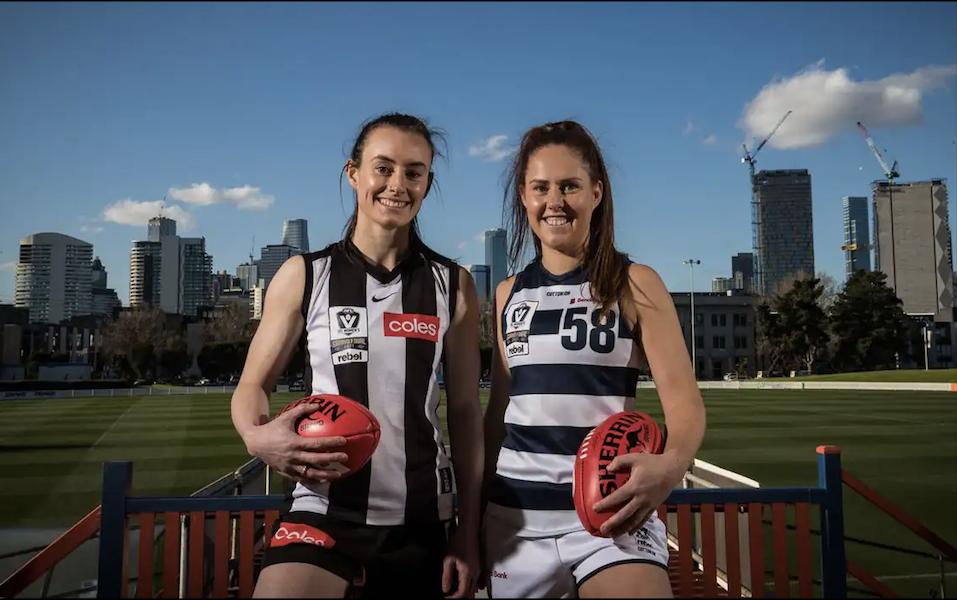 AFTER multiple attempts to play out the final game of the Victorian Football League (VFL) Women’s season, the AFL has officially pulled the pin on the competition, meaning the 2021 season will join 2020 as years without an official premier. Collingwood and Geelong had both reached the grand final and were hopeful of playing off […]