Charlton putting her name on the big stage 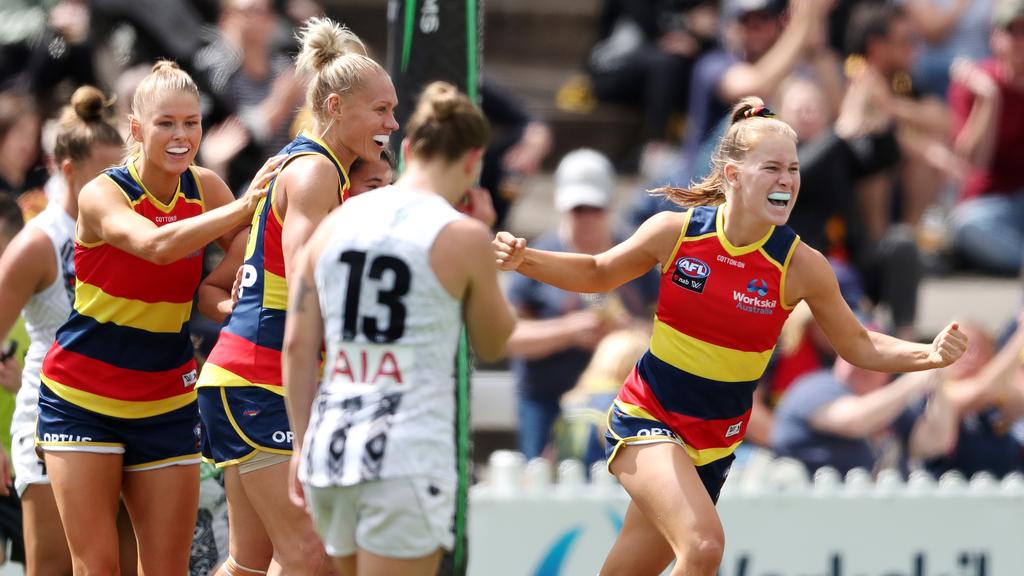 IT has been quite the journey for Teah Charlton, from shining in the SANFLW competition for South Adelaide as a junior, to cracking Adelaide’s formidable AFLW side and running out alongside some of the competitions most storied champions.

Charlton has risen through the footy pathway herself, having initially watched her brother play footy at the age of 10. She then signed up with the boys team at Noarlunga and went on to play for Christies Beach in the Under 18s, before moving into the South Adelaide squad. After cutting her teeth with South Adelaide, it led to prime draftee status in 2020, and her current exploits. It didn’t take long for Charlton to make an impact.

“I’m super grateful for every opportunity that I’ve been given,” Charlton said. “To debut in Round 1, fresh into the side was just amazing. From there, I haven’t really looked back since then. I’m just loving playing football.

“The only major setback for me was in my first year in the South Adelaide women’s team. I was struggling with really bad shin splints, which kept me out of the side and the season unfortunately. It wasn’t the best but I’ve learned from that and it’s really set me up for the future.”

Since putting her name out there in the SANFLW competition, Charlton has embraced the experiences playing in the competition and playing with South Adelaide.

“Playing with the older women at such a young aged has helped me with the physicality and the speed of the game. It has given me a lot of opportunities to really fly and flourish straight into the AFLW competition.”

Now shining in the AFLW alongside veterans such as Erin Phillips and Chelsea Randall, Charlton has been grateful for the opportunity to wax with those two superstars since the very start of her AFLW career. On the other side of the ledger, she has also played against some stiff opposition.

“All of those girls have had a lot of experience being there from the very start of the competition. You kind of just watch what they do and follow in their footsteps,“ she said.

“It was very hard to believe at the start that I was alongside playing with those players. I was definitely taken on the wing by Chelsea very early on, working out the difficulties of AFLW life and sorting my organisation out. With Erin, it’s the same on field and she’s been the one that I’ve looked up to and she’s always guided me in the right direction.”

“I think the AFLW has really improved my game, getting used to the speed of the game and a lot more physical and you have to adapt pretty quickly to stay in the side.”

“In the midfield, I’ve come up against a lot of those bigger names and there’s many I could list. During the pre-game, you kind of have that in the back of your mind, knowing those girls are playing and have been playing for many years. It always daunts you a little bit but it makes you a bit hungrier for it out on the field.”

Whilst it has been a phenomenal season for the Adelaide Crows, looking to go one step better after last year’s grand final feat, Charlton is hungrier than even and shares what she wants to bring heading into an exciting finals series.

“From last year, the loss in the grand final has just made me so hungry for it this year and hopefully we do get another opportunity for that premiership this year,” she said.

“I want to be able to bring the pressure because I know that is one of my strong suits. I want to bring that type of pressure as much as I can and get the game sold off really well.”

Whilst Charlton has embraced playing in a team sport, being in a fun team environment and loving that sort of environment, she shares what motivates her to get up in the morning and train.

“We want to better the competition for the future,” she said. “Getting up in the morning every day or most days is what we strive for. We want to make the competition better for the girls coming up through the pathways.

“Footy has been a part of my life for a fair few years now. I hope to be able to keep playing for many more years. I love footy and hope that it’ll keep going on.

“Someone that I look up to is Rory Sloane. He is a great leader and a great guy in general.”

Lastly, Charlton shares her words of wisdom to those out there wanting to improve their game.

“Setbacks do come along. You’ve just got to be able to push through them and know that it will make you better for the future.”