WAFLW Team of the Week: Round 16 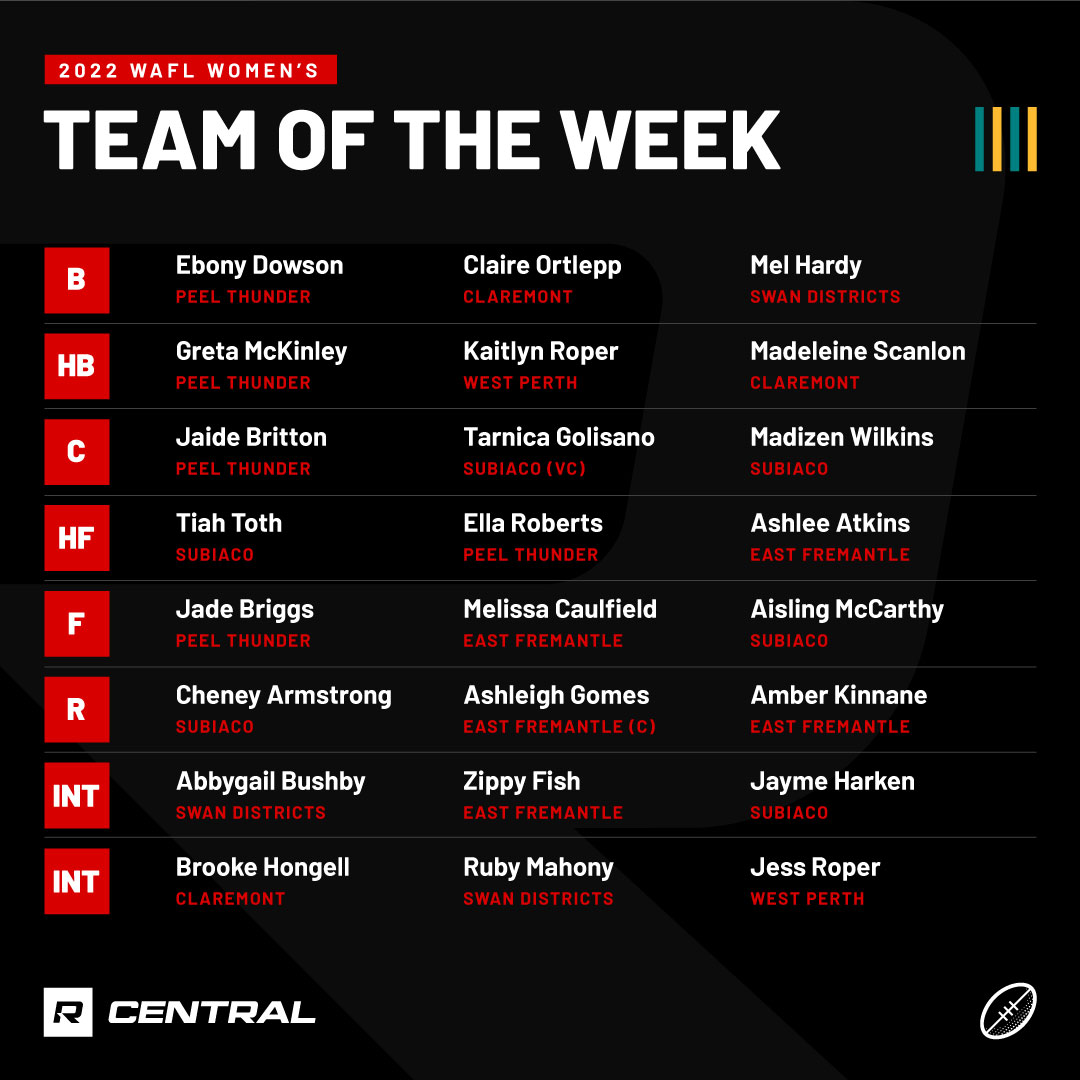 SUBIACO grabbed a vital win over Claremont to keep its West Australian Football League (WAFL) Women’s finals hopes alive and recorded six players in our Team of the Week for Round 16. The half-dozen representatives were the most of any side in the competition, with fellow winners, East Fremantle and Peel Thunder both notching up five representatives each. From the losing teams, Claremont and Swan Districts both recorded three apiece, while West Perth did not score, but picked up two players after being competitive for large portions of the game.

Subiaco finished with the six players and holding the title for the most of the round for the first time this season, lead by returning captain, and vice-captain in this team once again, Tarnica Golisano. She was joined by her usual partners-in-crime through the midfield, Madizen Wilkins and Jayme Harken, while Tiah Toth also made it onto a half-forward flank. Playing her first game of the season in the Lions colours, AFLW-listed Aisling McCarthy made it into the forward pocket, while ruck Cheney Armstrong made her debut in the Team of the Week for efforts across the ground.

East Fremantle had a huge 64-point win over West Perth and recorded five players after an even spread of contributors. The midfield and forward lines are painted blue and white, with the Round 16 Team of the Week captain, Ashleigh Gomes and fellow midfielder Amber Kinnane onball once again. Up forward, both Ashlee Atkins and Melissa Caulfield have made it into the team, while young gun Zippy Fish is on the bench.

Peel Thunder was the other winner across Round 16, and they also had five representatives in the 24-player squad. In defence, Ebony Dowson and Greta McKinley made it in, with winger Jaide Britton slotting into that role once again. Up forward, Ella Roberts and Jade Briggs both made the side after impressive efforts.

Swan Districts suffered defeat in that game, with a couple of midfielders joining a defender in the Team of the Week. Mel Hardy (back pocket), and Abbygail Bushby and Ruby Mahony (both interchange) made it in, with the two midfielders only squeezed out due to the strength of the onball group for the round.

Claremont also had the three representatives with two in the back six, starting with full-back where Claire Ortlepp resided, while Madeleine Scanlon made it onto the half-back flank. On the bench, Brooke Hongell – who rotated between half-back and wing – rounded out the trio of Tigers in for this week.

Finally, West Perth copped a beating at the hands of the Sharks, but a couple of sisters made the Team of the Week together for the first time. Both Kaitlyn Roper and Jess Roper have made Team of the Weeks before, but for the first time, they slot into the same 24, with Kaitlyn at centre half-back, and Jess on the interchange. Their teammate Megan Norbury was named one of the three emergencies, alongside Claremont’s Tess Blackburn and Peel Thunder’s Sabreena Duffy.