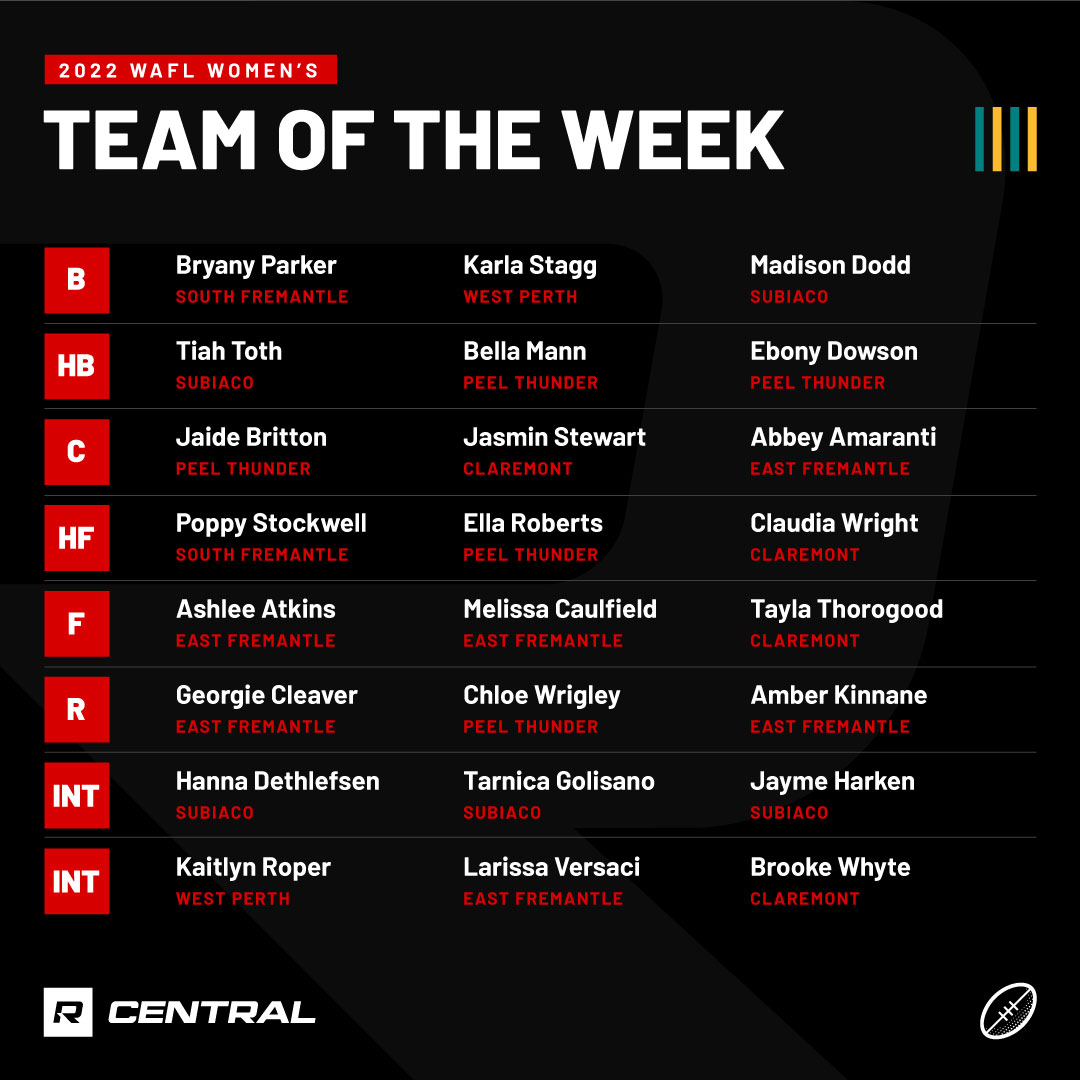 EAST Fremantle secured a perfect 14-0 regular season record on Saturday, and boast a high of six players in our WAFL Women’s Team of the Week for Round 17. While the Sharks proved far too strong for South Fremantle in their weekend derby, Peel Thunder and Subiaco put on a thriller to both produce five representatives. Elsewhere, Claremont contributed four players, while bottom sides West Perth and the Bulldogs have two apiece.

Four of the six members of this week’s defence turned out in the same game, with scoring at a premium as Peel Thunder held on to beat Subiaco by five points. Arguably the pick of the lot down back for Peel was Bella Mann, whose reading of the play and aggressive rebounding helped break the game open. She’s joined by teammate Ebony Dowson at half-back, whose dash out of defence caught the eye.

Down the other end of the ground on Saturday, Subiaco’s Madison Dodd did much of the same to earn a spot in the back pocket, while the well known quantity that is Tiah Toth also racked up a mountain of possessions rotating through midfield.

Suring up the last line is West Perth’s Karla Stagg, who was tasked with an unenviable job as one of the Falcons’ deepest defenders in a scoreless outing against Claremont. South Fremantle rebounder Bryany Parker, a recruit from the AFL Sydney ranks, was also impressive with tireless run in a loss.

Plenty of experienced and polished midfielders stepped up in Round 17, especially among the finals contenders. At the heart of our side is Claremont’s Jasmin Stewart, who was exceptional with 23 disposals and two goals in the Tigers’ shutout of West Perth.

East Fremantle is well represented both on-ball and on the outside. Tall prospect Georgie Cleaver did her best work up forward but played enough in the ruck to earn a starting spot there, while Amber Kinnane‘s best afield efforts see her feature at the centre bounces, as Abbey Amaranti takes up a spot on the wing.

A couple of standout goalkickers spearhead this week’s attack. East Fremantle again has multiple members on the full forward line, with Melissa Caulfield a lock after her five-goal performance, aided by the efforts of Ashlee Atkins who slots in alongside her.

Claremont’s Tayla Thorogood, who snared three goals as her side’s most damaging forward, completes the full forward trio. Fellow Tiger Claudia Wright was hard to overlook for her promising display on the attack, while gun youngster Ella Roberts earns a spot for her late-game feats, and South Fremantle’s Poppy Stockwell gets in for showing a bit of grit in the Bulldogs’ derby loss.

There were plenty of even performances across the league this week, making the interchange bench a tricky one to pick. Subiaco is well represented, having run the dual reigning premiers to within a goal, boasting three more players on the rotation. Namely, they are tall forward Hanna Dethlefsen, midfielder Tarnica Golisano, and the versatile Jayme Harken.

Larissa Versaci is the sixth Shark to feature, after gathering the second-most possessions for her side. Brooke Whyte showed plenty for Claremont in a strong attacking showing, while West Perth defender Kaitlyn Roper rounds out the side after her valiant efforts in a slightly altered role.

ROOKIE ME CENTRAL WAFLW ROUND 17 TEAM OF THE WEEK: