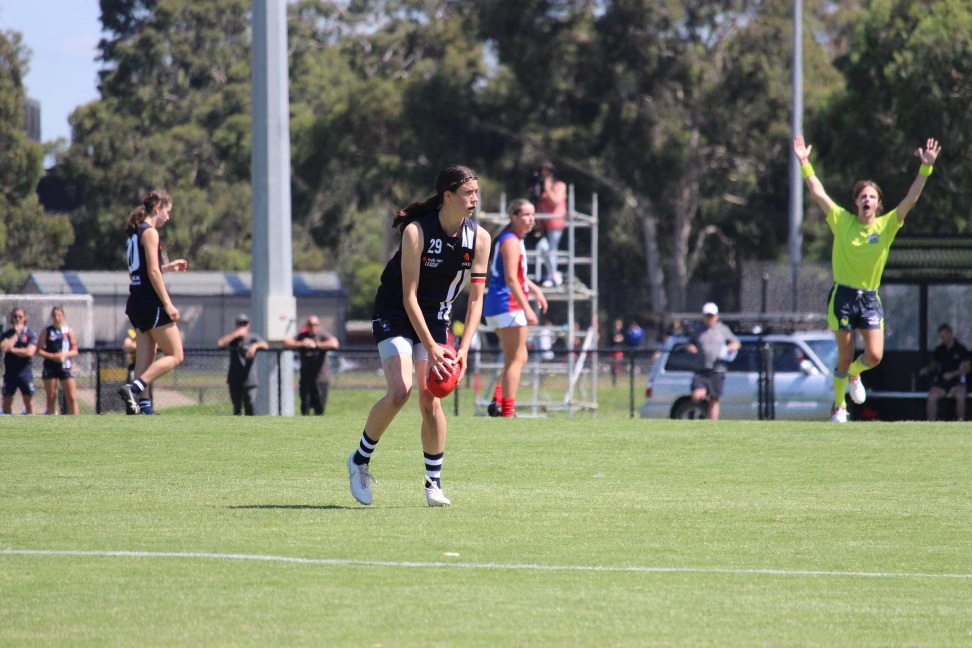 HAVING risen through the Geelong Falcons Girls pathway herself, Mia Van Dyke knows what to look for when it comes to talent. The versatile tall utility can play anywhere on the football field, and after reaching the 2021 NAB League Grand Final – and falling one win short of a premiership – she is excited about what the year might bring.

“We’ve got a pretty young squad,” Van Dyke said. “We’ve got so many young girls come up, but they’re all really talented and got a good skill level. “It’s really good to be around so I think that’ll come in handy with the older girls, and the coaches are really good as well. “They’re really supportive, I think it should be a really good year.”

Despite going down in the grand final, Van Dyke said once the disappointment had passed, it was clear the side could be pleased with what they had achieved.

“Even though we didn’t win, they put up a good fight, I can’t argue with that,” Van Dyke said. “It was obviously disappointing to lose, but I reckon we did really well to get there, and I hope we get there this year as well.”

From that Grand Final team, Annie Lee was drafted to Carlton, Tess Craven headed to North Melbourne, Gabbi Featherston went to Geelong, Ingrid Houtsma found her way to Richmond, and during the preseason, Poppy Schaap also joined Lee at the Navy Blues.

“I was just really stoked and proud of them,” Van Dyke said. “I know the effort they put in at this level. “You don’t see the behind the scenes work that they do, and I’m just really proud of them. “Just seeing them play where I am now, that’s an opportunity you can get, so you never know. “But we’ll just see how we go.”

Looking at Van Dyke’s own football journey, it started in a very famous footy club with ties to the Cats.

“I first started off doing Auskick down at Modewarre where Gazza Ablett played,” Van Dyke said. “I started playing with the boys, and when I got too old I moved over to joeys and played with the girls. “I got into the V/Line Cup which I was super stoked about. “Then I got invited to the Geelong Falcons and I’ve been there four years. “I’m really excited about it.”

In 2021, Van Dyke said she felt her running improved, both from a sprinting and endurance perspective, as well as her reading of the play. Though she was tested out in different roles, she said she enjoyed centre half-forward the most, though the wing – where she can utilise her run – is another favourite position of hers. As for her strengths and improvements, Van Dyke knew where she stood.

“I thinks my strengths are maybe my short distanced kicking,” she said. “I think I can pinpoint them pretty well. “Then also I think I can definitely work on my ground balls, then just my contested marks.”

The preseason has been shorter than most, with Round 1 games kicking off from January 22. Van Dyke said it has had a different feel around the club, and the training had been maximised to improve certain aspects of gameplay.

“It’s been interesting because you don’t have that much time to prepare and get to know the girls,” she said. “But I think we’ve been pretty good, I think it’s also the running aspect, getting ready for the gameplay emotion of it. “It’s different to training, but I think it’s good.

“It’s more been fundamentals and skill-based but we have started to get into the footy game aspect of it. “That’s been pretty good to get around it.”

As for her 2022 goals, she said it was difficult to pinpoint exactly what she wanted, but she had a lot of little goals in mind.

“It’s hard one. I mean the Vic Country hub is coming up, so that would definitely be amazing if I got in (to the Country Under 19s squad),” she said. “If I didn’t then I wouldn’t be disappointed, I would keep going hard. “I suppose i just want to work on myself and my football, even at club level. I really want to focus on that.”