WAFLW Round 4 preview: Undefeated Thunder and Sharks to clash 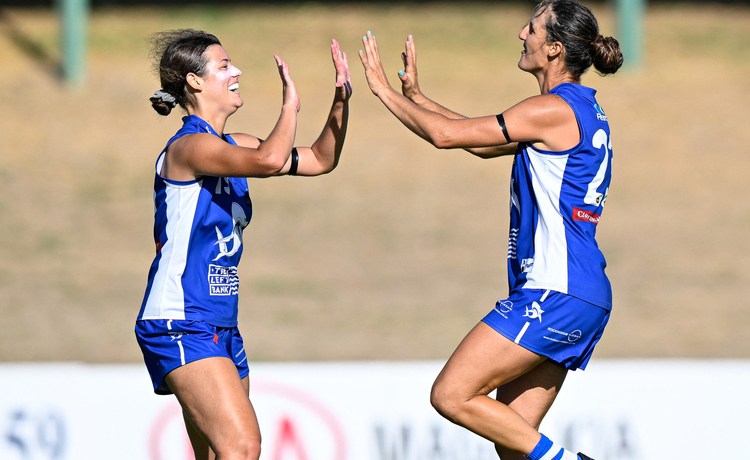 AN all-undefeated clash between Peel Thunder and East Fremantle opens the West Australian Football League (WAFL) Women’s Round 4 action. The two sides sit at 2-0 for the season, whilst the other team with two wins – Claremont – takes on newcomers West Perth, and the two sides that opened their accounts with wins in Round 3 – Swan Districts and Subiaco – lock horns in the other match. South Fremantle has the bye.

Returning to the fold after a week’s rest, Peel Thunder hosts East Fremantle in a battle of the two unbeaten sides. Back at home in Mandurah, the Thunder will look to have a more settled win this week after a couple of scares in the opening two rounds against Subiaco and South Fremantle. The Sharks on the other hand took care of Swan Districts then proved they were good enough to beat the best with a win over the previously unbeaten Claremont in Round 3. Based on form the Sharks should be favourites here, but at home the Thunder are hard to beat.

The Sharks lose AFLW-listed Kellie Gibson for the Round 4 clash, with youngster Natasha Entwistle also out of the side. Coming in are the likes of Anjelique Raison and Kate Inglis-Hodge who have been named on respective half-back flanks. The Sharks defence has been good this season, lead by Alex Williams, who will have a big job on the dangerous Kira Phillips and working with the likes of Hayley O’Donnell to try and limit the impact of Kate Bartlett, who is fresh off a five-goal haul. A couple of youngsters are in line to go head-to-head on the wing in Kaitlyn Srhoj and Zippy Fish, which should be a great clash, whilst Bella Mann returns after missing Round 2, to join Gracie Fenton and Chloe Wrigley on-ball against a red-hot Sharks midfield of Ashleigh Gomes, Sharon Wong and Beth Beckett.

Peel Thunder probably head in as favourites, but the Sharks arguably should be, with slightly more convincing wins, but regardless it makes for a fascinating contest.

West Perth fans finally get to see their team in action on Sunday when the Falcons host Claremont at Joondalup. The Falcons have tried to remain relatively stable in the lineup, with a much-improved outing against Swan Districts despite a far heavier loss (91 to 74 points), because they had more possession and more inside 50s (12-1) compared to the first round defeat where the Falcons failed to score. Claremont is coming off its first loss of the season, going down to East Fremantle in Round 3, after back-to-back wins in the opening two rounds against Swan Districts and Subiaco respectively.

The Falcons have made the one change with a swap of teenagers. Tayla Anthony returns to the side after missing last week, replacing wing and Under 16s State Academy member Megan Norbury in the side. The Tigers have lost a fair chunk of experience against the bottom side, with the likes of Madeleine Scanlon, Sarah Garstone and West Coast listed Emily Bennett all out with State Academy members Mackenzie Webb and Jorja Elisseou also gone from the Round 3 loss. They regain Fremantle debutant Mikayla Western for the clash, with Jacinta Valentini, Kobi Nichols and Julia Uhe set to play their first games of the season.

Claremont should simply be too strong across the board, with a star-studded midfield and experience in all thirds of the ground compared to the Falcons, who have an average age of 18. Ella Smith, Katherine Orme, Western, Sasha Goranova and Emily Elkington is one incredible midfield, with big jobs in store for the likes of midfielder Kayla Van Den Heever, and defenders Liliana Grassenis, Nicole Bombardieri and Kayla Stagg. The Tigers to win this clash very comfortably.

Rounding out the clash is a battle of the two sides who picked up their first wins in Round 3, with Swan Districts hosting Subiaco at Steel Blue Oval on Sunday afternoon. The black and whites were able to take care of West Perth last week to break their 0-2 start to the season, whilst Subiaco overcame South Fremantle to move to 1-2 as well. Coming into this clash, the Swans have lost some experience in the injured Sonia Dorizzi and AFLW-listed Shanae Davison. Into the lineup comes the likes of talented youngsters Chanel Jetta and Isabella Edgley, whilst Amber Ugle-Hayward is among an extended group of inclusions. Subiaco will be without Amy Mulholland and Scout McCormack who will miss Round 4, but are set to regain the talented Abbey Dowrick among a list of six inclusions.

There are plenty of fascinating contests across the ground, but the midfield battle might be the best of the lot. The likes of Jessica Cox, Demi Liddle and Hope Ugle-Hayward up against a Lions midfield of Lara Filocamo, Jayme Harken and Madizen Wilkins. On the wings, Swan Districts youngsters Emma Nanut and Tara Stribley take on more experienced rivals Tarnica Golisano and Ellie Blackmore, whilst up forward for the home side, Ashley Sharp, Taylah Edwards and Bethany Bond will hope to continue their goal-kicking form against the likes of Madison Dodd, Jamie Rust and Caitlin Walker.

Swan Districts should head in as favourites at home now the Swans have gained a confidence-boosting win, though the Lions have so many quality players through the midfield, if they can win that battle, then they will put up a big score.