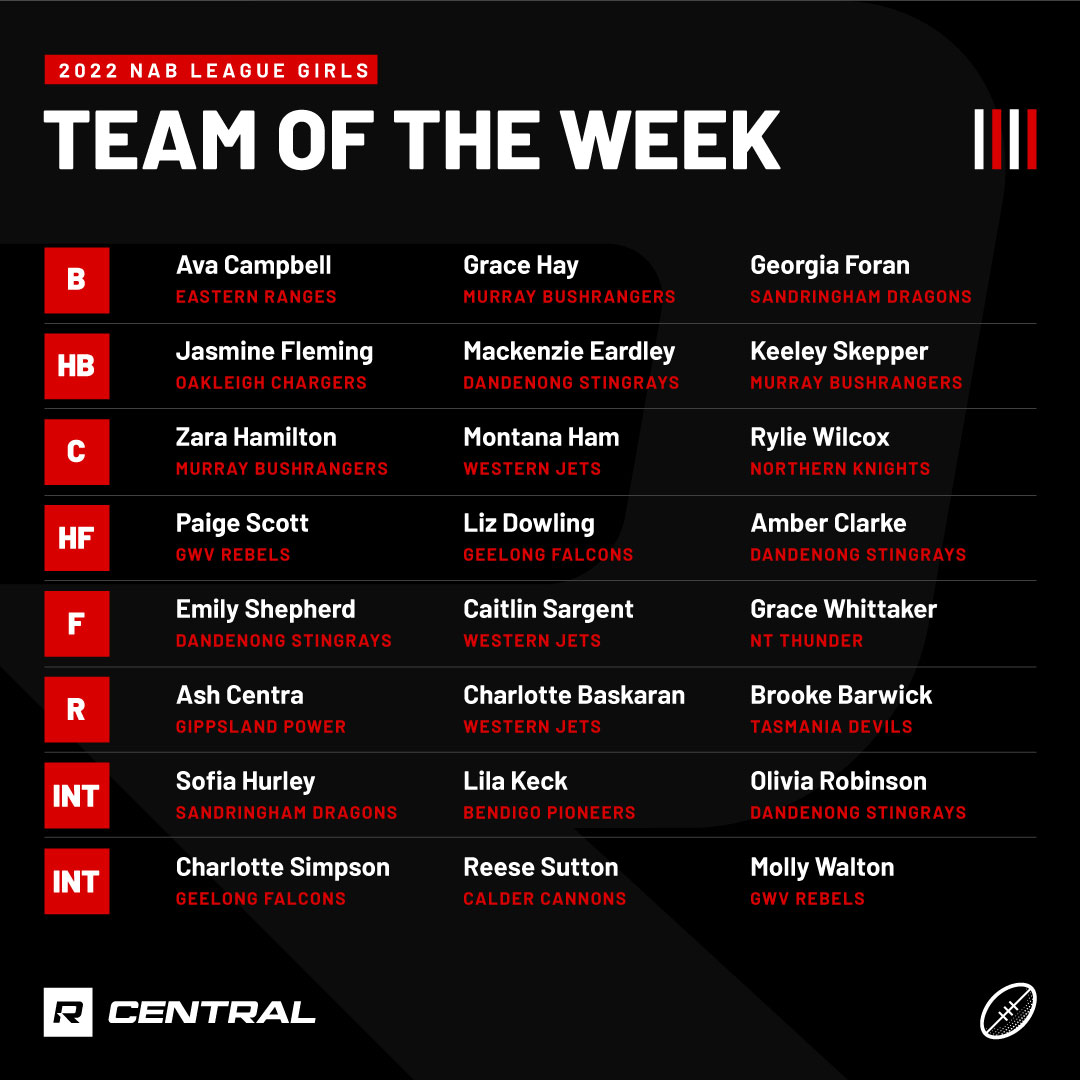 AFTER sealing an undefeated home-and-away record, the Dandenong Stingrays dominate our NAB League Girls Team of the Week for Round 10. There are four Stingrays in this week’s lineup, with the Western Jets and Murray Bushrangers contributing three talents apiece. Check out the full 24-player squad, including three emergencies, below.

Round 10 saw a few top-age stars return to their bottom-age best, none more so than Greater Western Victoria forward Paige Scott. Fresh off a promising performance for Vic Country, the enigmatic forward booted three goals from 21 disposals and six marks. It was her most prolific outing for the season, in a case of saving the best until last, with Scott registering her top 2022 totals for disposals, goals, marks and tackles all in one game.

A distinctly tall defence with intercept and rebound power makes up this week’s back six. Vic Country pair Mackenzie Eardley (Dandenong) and Grace Hay (Murray) take up the key position slots, with the latter’s teammate Keeley Skepper slotting in again at half-back having played on all three lines against the Northern Territory.

In the pockets, Metro intercept markers Ava Campbell (Eastern) and Georgia Foran (Sandringham) were kept busy in losses, while top Victorian pick candidate Jasmine Fleming (Oakleigh) fared wonderfully well in a new role off half-back to round out the backline on a strong note.

There is a familiar feel to this week’s midfield, with Team of the Week mainstays Charlotte Baskaran and Montana Ham both earning starting spots after helping Western claim top spot in the Metro pool. Tasmanian bottom-ager Brooke Barwick joins them on-ball, while Gippsland powerhouse Ash Centra is a somewhat cheeky choice in the ruck having spent a little time there, but dominating with 3.3 up forward.

In the same game as Centra, Northern Knights standout Rylie Wilcox made every touch count with her speed and skill to cement her spot on the wing. Featuring on the opposite side is Murray’s Zara Hamilton, who again racked up plenty of the ball and had four scoring shots despite the Bushrangers’ loss.

Taking leading from the front literally, Scott captains the side at half-forward among what is a talent stacked attacking line. Dandenong has two representatives – Amber Clarke and Emily Shepherd – with the latter enjoying a season-best outing on the back of five quality goals.

Caitlin Sargent bagged the next most goals for the round with three, doing most of her work within 20 metres of the big sticks, while Geelong over-ager Elizabeth Dowling mixed her time between the midfield and forwardline in an ominous performance. Bottom-ager Grace Whittaker is the NT’s lone representative in the side, after her two-goal effort.

Competition for spots was tough on the interchange bench, with three players very unlucky to miss out on selection. Making the cut were Sofia Hurley and Molly Walton, after their sides went head to head in the final home-and-away fixture for 2022.

ROOKIE ME CENTRAL NAB LEAGUE GIRLS TEAM OF THE WEEK: ROUND 10