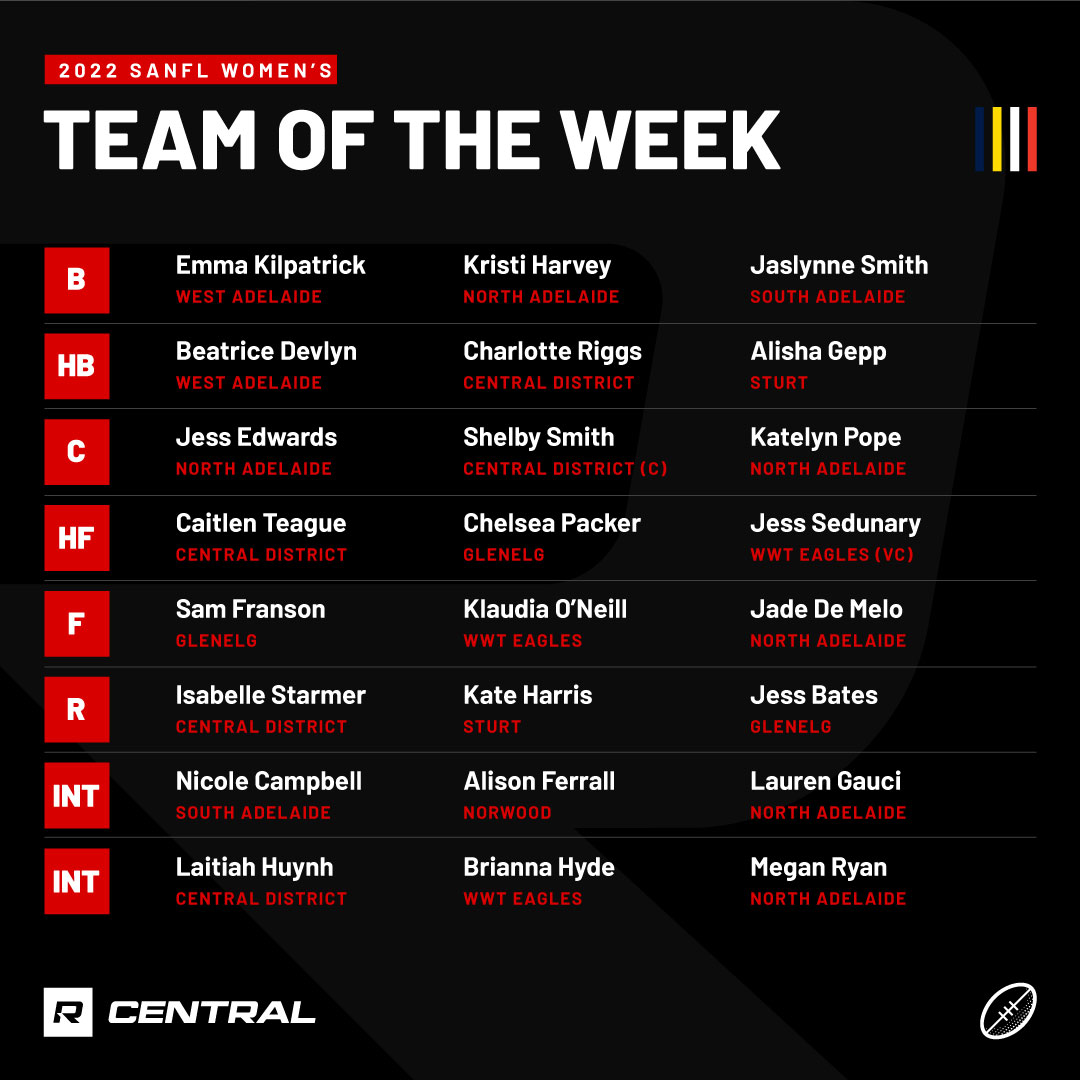 IN one of the toughest weeks of the year, the Rookie Me Central South Australian National Football League (SANFL) Women’s Team of the Week was difficult to cut down to just 24 players. In the end, Round 9 winners North Adelaide (six) and Central District, (five) players apiece leading the way, with the other winners, Glenelg and Woodville-West Torrens Women’s having the three. Whilst Norwood only managed the one this week, the other three losing sides South Adelaide, Sturt and West Adelaide had two apiece.

Leading out the team this week for a second week this year is Central District skipper Shelby Smith after another huge game, picking up 37 disposals, five marks, nine tackles, eight clearances, four inside 50s, five rebound 50s and a goal. Her vice-captain for Round 9 is versatile Eagles midfielder Jessica Sedunary, recording 25 disposals, two marks – one contested – four clearances and seven inside 50s in her side’s victory.

It is no surprise to see some familiar faces in the back six, headlined by Roosters co-captain Kristi Harvey yet again following a consistent 12-disposal, seven-mark and seven-rebound performance throughout North Adelaide’s big win over South Adelaide. Speaking of the Panthers, Jaslynne Smith is there again, named in a back pocket after 18 disposals, four marks, five tackles and five rebound 50s in that match. At centre half-back is Bulldogs youngster Charlotte Riggs who took five marks – two contested – to go with her 16 disposals and three rebound 50s.

A couple of West Adelaide players are in the back six, with Beatrice Devlyn and Emma Kilpatrick making the starting squad. Devlyn had the 18 touches, two marks, four tackles and six rebound 50s, whilst Kilpatrick recorded 17 disposals, four tackles and 10 rebound 50s. Rounding out the back six is Sturt’s Alisha Gepp with the midfielder spending plenty of time mopping up in defence on her way to 15 disposals, three marks, five tackles, four clearances and five rebound 50s.

With Smith leading the on-ball group, her teammate and ruck Isabelle Starmer is back in again, recording the second most disposals of the round behind Smith. Starmer had 27 disposals, five marks nine tackles, eight clearances, four inside 50s and four rebound 50s in the win over West Adelaide. Also on-ball are a couple of tackling machines in Sturt’s Kate Harris and Glenelg’s Jessica Bates. Harris laid a round-high 17 tackles to go with 21 disposals, three marks, five clearances, two inside 50s and two rebound 50s. Bates managed 23 disposals, five marks, 13 tackles, five clearances, three inside 50s, two rebound 50s and a goal.

In attack, Glenelg and Eagles have a couple of representatives each. Alongside vice-captain Sedunary, the Eagles also have full-forward Klaudia O’Neill who was the only player to kick three goals on the weekend in the win over Norwood. Bays duo Samantha Franson (21 disposals, eight marks, eight tackles, five inside 50s and two goals) and Chelsea Packer (16 disposals, four marks – one contested – five tackles, seven inside 50s and two goals) also feature in the front six.

Central District’s Laitiah Huynh made the side again after 22 disposals, two marks, two tackles, three clearances and four inside 50s. Rounding out the side are South Adelaide’s Nicole Campbell and Eagles’ Brianna Hyde. Campbell is no stranger to the Team of the Week, having another big outing of 19 disposals, seven tackles, four clearances and four inside 50s, whilst Hyde makes her first SANFLW Team of the Week after 19 disposals, tow marks – one contested, four tackles, three clearances, three inside 50s and three rebound 50s.

SANFL WOMEN’S TEAM OF THE WEEK: ROUND 9