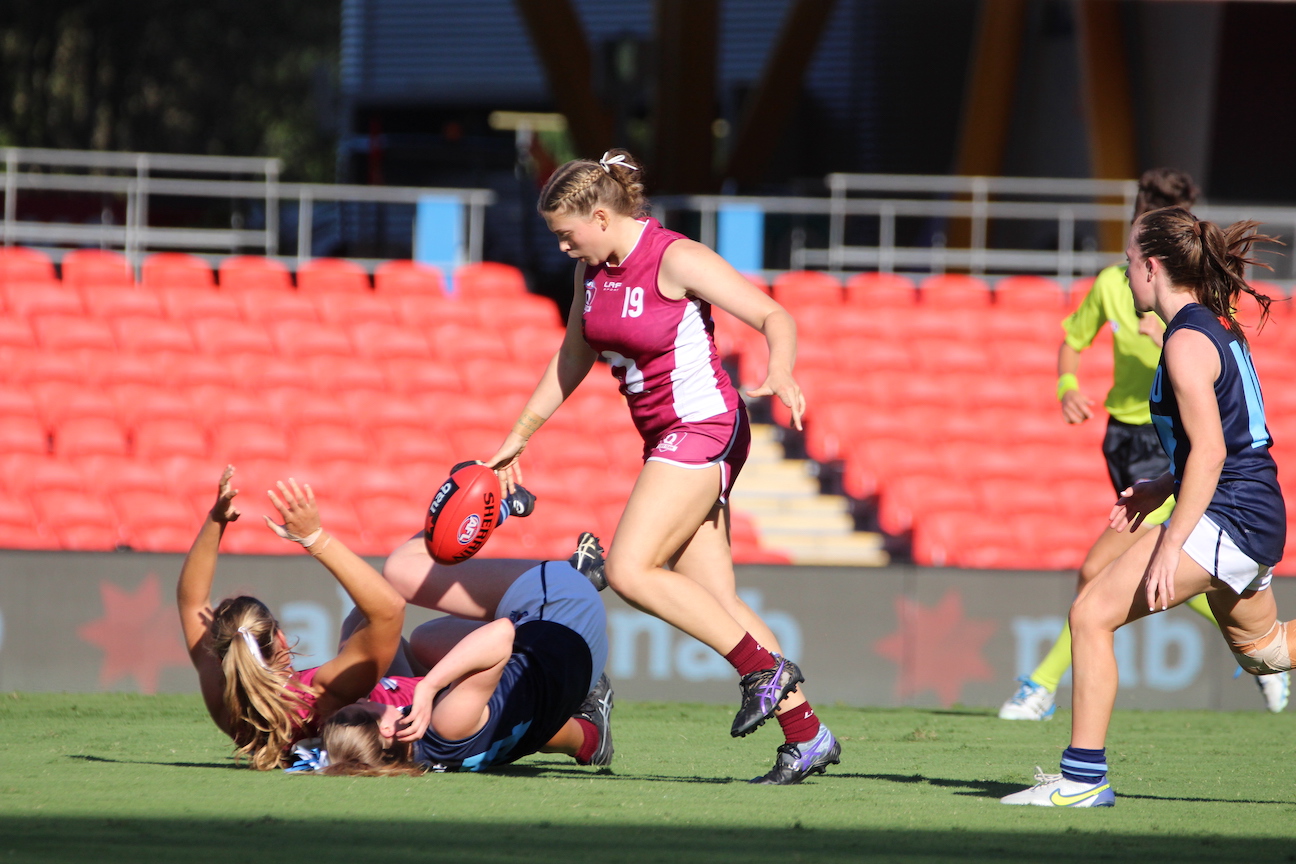 AFTER an interrupted 2021 season, Queensland’s Imogen Evans is enjoying not only some continuity in her football, but a lot of new experiences along the way. Running out for her state at Metricon Stadium in the first AFL Women’s Under 18s clash for the Sunshine State against Vic Metro, Evans described it as “pretty surreal”.

“It was super exciting coming onto Metricon Stadium,” Evans said. “Before we played and came out and did the warmup on here and it was pretty surreal. Although we didn’t max it out, we had all our family there and it was super cool to play on and just kind of give you that little bit of that fire in the belly to make it all the way (to the AFLW).”

>> IMOGEN EVANS FEATURE AND CHALLENGES OF 2021

Though her side ultimately went down to Vic Metro after a competitive effort, Evans said the team was fully committed to bouncing back against the other Victorian side – Country – tomorrow at Avalon Airport Oval.

“It’s always good to make the trip down, it’s super exciting getting to verse Vic again and I guess we’ll look at it like a bit of redemption and playing four quarters of footy unlike we did today, and hopefully get the Dub down there,” she said.

Losing a number of rotations due to injuries to Josie McCabe and Litonya Cockatoo-Motlap coming off in the second and third terms, Evans praised the coaching staff for having to make “live” rotations to adapt. She credited the players with just remaining focused on the match and playing their roles.

Speaking of roles, the Queensland side has an abundance of midfielders, with both the Suns having not only Evans, but the talents of Alana Gee and Jasmyn Smith, whilst the Lions have Ella Smith – who captained Queensland on the day – Ava Seton and Charlotte Mullins among others. It meant many of them have had to adjust to a second position, with Evans playing half-forward for the majority of the match, then rolling through the midfield when required.

When asked if it was tough having to play in a second position, and how difficult it was for the coaching staff to have to rotate so many players through, Evans said it had its challenges.

“Yeah it is definitely tough, but I guess thriving under pressure, and making sure you play the best you can playing that midfield because it is a very hot spot and it just kind of gives you that pressure and opportunity to play your best footy,” she said.

The other challenge when two sides such as the Suns and Lions join together, is making sure all the players are on the same page. Though Evans said at times players can stick in their own friends circles, she said it was not the case for Queensland, who had bonded really well.

“It’s been super fun,” she said. “We’ve really gelled well as a group. “There were no real cliqueness which was super exciting, which with girls it is stereotypically pre-empted. But it was really good, everyone’s gelled really well and we’re all really good friends.”

At state league level, Evans made her debut for Bond University, stepping up to the QAFL Women’s league in 2022, and earned a best on ground performance from the coaches. The talented midfielder said she loved the experience.

“All the girls have been super welcoming and I really love playing at Bond and played first match the other week and it was super exciting,” Evans said. “The conditions were not the greatest but we all had fun, and it’s super fun camaraderie and I really love the club.”

As for her own individual game, Evans said she was just looking to play four quarters each and every week, much like her goal for her state.

“I think just my consistency in my playing, just making sure that I’m anticipating where I can be, and if I’m not there, what I can do next, and just being really consistent with my footy and just basic fundamentals” she said.