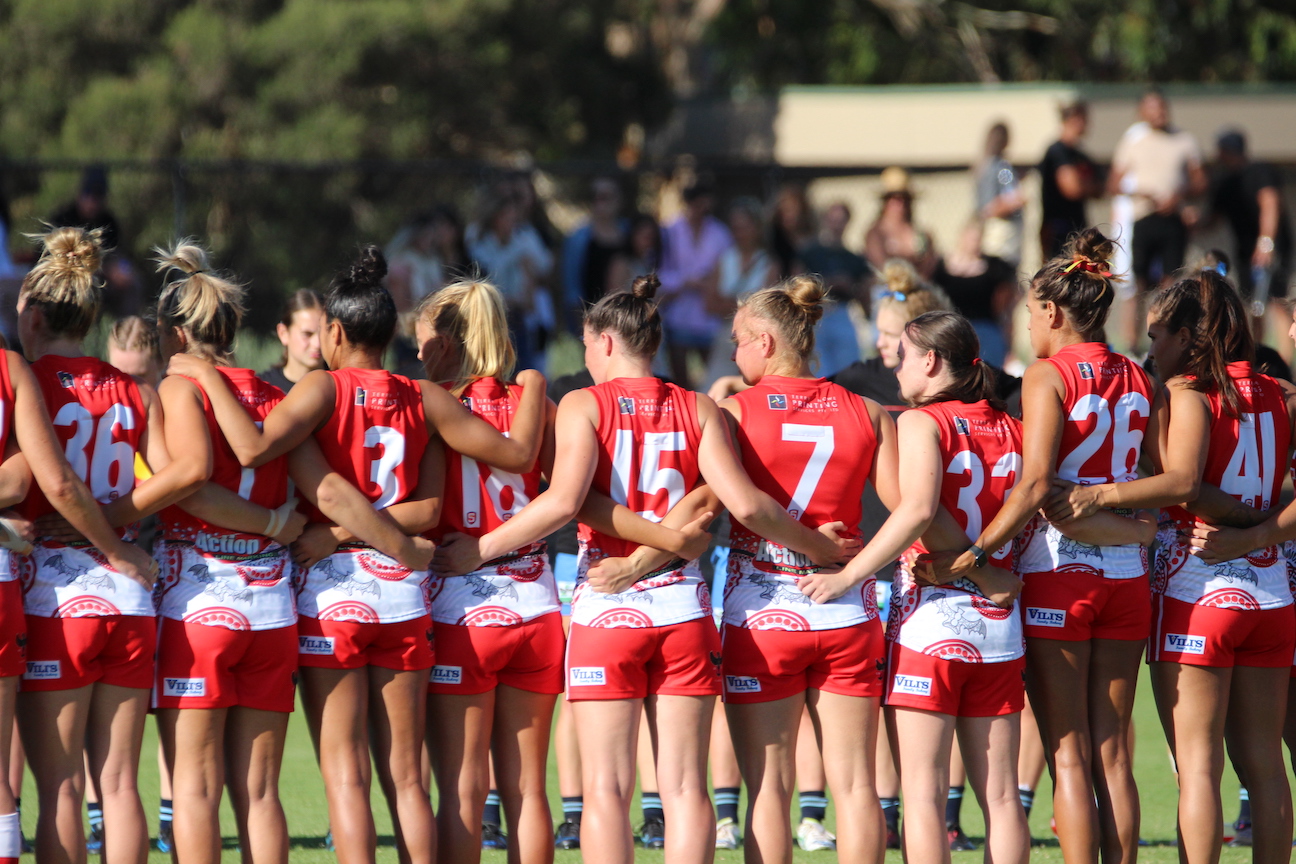 “THEY’VE got some great players, but I think our best is better.”

North Adelaide coach Krissie Steen is backing her side in to rise again from its 57-point semi-final victory against Sturt, just two sleeps out from the biggest day on the South Australian National Football League (SANFL) Women’s calendar. The three-time League premiership coach is right to be confident, with the Roosters earning the minor premiership off the back of an eight-game winning streak, having only lost one game since Round 3.

The Roosters won the premiership in 2020 before missing the finals series last year, then rebounding in the best way possible. At the start of the year, Steen said she felt the preseason had been harder than previous years and they were primed for a big year. Now looking back in hindsight, Steen said they had got to the match they wanted to – the grand final – and the success so far was credit to the playing group, coaching staff and list manager.

“Every year you hope for this regardless what’s happened the year before,” she said. “What’s the point of coaching footy if you’re not going in to make the grand final? I think we lost 12 from that grand final team in 2020 and then we got we got five season ending injuries, so we got hit pretty hard last year.

“We knew coming into this year we had to recruit quite successfully, and on top of that, having the reserves come in there was a great opportunity to pick players who showed a lot of promise from our zone and start blooding kids. I think the success of our list manager shows by winning the Reserves flag already and making the grand final with the League side.”

North Adelaide plays a systems-based gamestyle where if one player goes down with injury, the next player in line can come in and play a role. Steen said this style helped the Roosters maintain their success throughout the year, with four players going down with anterior cruciate ligament (ACL) injuries at various points. The depth the club has built has enabled them to have plenty of options at the selection table.

“We have lots of players knocking on the door,” Steen said. “I’ve probably got quite a few players who in another team would be playing this weekend but we just can’t fit them in.”

In terms of experience, the Roosters have the edge over the Double Blues, with seven players remaining from the 2022 premiership side that defeated South Adelaide. Among them is co-captain Kristi Harvey who will go for her fourth flag in five seasons, while Hannah Ewings, Katelyn Pope, Brianna Arthur, Erica Greet, Julia Clark and Lauren Gauci will all be eying off another premiership medallion in the red and white. Though Steen said the experience would help, no one was taking the game for granted.

“When you’ve got previous experience in anything it helps you deal with things a little better,” she said. “That said, not any of them are taking it lightly. “For us the slate’s clean, we’ve got one shot on Sunday and so they’re all keeping themselves nice and calm and grounded. “They know we’ve got to bring the best game we’ve had all year. “I don’t think anyone’s going into it with any other mindset other than treating it like it’s the first one and they’ve got to bring their A-game.”

North Adelaide has made the most of its week off after the big semi-final victory, and has kept busy with a number of team bonding experiences. Steen said the playing group had Mondays off – as part of the Sunday match fixtures – and instead had every player return to the club on Wednesday night to maintain the club culture heading into the big game.

Additionally, the Roosters simulated a match last Saturday, before having a team get-together at a local vineyard to celebrate what they had achieved and ensure they everyone felt connected and ready for the big game a week later.

“We actually had a team gathering where we went out to a friend’s vineyard of mine” Steen said. “We had a huge bonfire and the club put on dinner for everybody and everyone relaxed around the fire and quite a few camped overnight and we woke up in the vineyard and had breakfast together. “It was really lovely, so it just gave us an opportunity to enjoy what we achieved, and get around one another and just reset before this weekend.”

Co-captain Harvey will be a key figure in defence for the Roosters on Sunday, and as previously mentioned, both her and coach Steen will be looking to combine for their fourth flag together (including Adelaide University). When asked if Harvey was the good luck charm to the success on the field, Steen said neither of them really knew what made it work, but she was glad it did.

“I don’t know, when she retires I might have to retire because we don’t know who’s the good luck charm for one another, whether it’s me for her, or her for me, or the two of us together,” Steen joked. “Kristi’s not arrogant enough – regardless of how she might come across on the field – she’s actually an extremely humble person and I don’t think she’d go into it thinking she’s a good luck charm. “She pokes fun at me that it’s not actually me as a coach but it’s her as a player.”

Another key player in the game will be AFLW Draft prospect and young gun Ewings, whose last two games has been as good as anyone’s at any point in the season. The teenager wanted to work on her defensive running, and she picked up more rebound 50s in the past two weeks than she had all season combined. Steen, who has coached Ewings through her entire career said the two-way running was a topic of conversation in the off-season and she was thrilled that her hard work was paying off, and conceded she might even get a touch emotional at the final siren.

“She’s worked really hard and over the last few games it’s just become extremely clear that it’s clicked and her effort has lifted,” Steen said. “I think just as she gets older she’s just going to get stronger and stronger, but she’s going into this game in a fantastic position and it’s going to be a fantastic day to see her play in another grand final.

“I’m really proud of her that she’s got this opportunity that her last game in the SANFLW is going to be a grand final. “I wouldn’t be surprised if I’m shedding a few tears at the end because I know that it’s the last time that I’m going coach her.”

Looking to the game itself on the weekend, Steen said that she expected Sturt to bring the heat, and her players had to lift accordingly. With the weather in mind, the North Adelaide coach said her side would fully focus on her game plan and look to execute it, backing in the team’s system.

“We’ve just got to go harder than what we did in that game. We set a standard that they’ve had a taste of and they’ve got to lift quite considerably to counteract that so if they’re going to lift, we’ve got to lift. We’ve got to bring more than we even did and the girls are fully aware of that.

“Obviously the weather could affect things but we’re just taking it one step at a time. “I think we’ve got a pretty strong game plan and dependent on when it gets wet, and how wet it is, and that will depend on how we change what we do, but we’ve trained for both, so we’re prepared for whatever the conditions throw at us. “I’m not a massive believer in focusing too much on the opposition. “I think if you do what you do very, very well, people can’t stop you.”

Sturt will be without crucial player Isobel Kuiper, with the reigning best and fairest midfielder ruled out with a knee injury. Steen said while as the opposition coach it might have seemed like an advantage, she said that if “push came to shove” she would prefer to see the best players playing.

“She’s a fantastic player and even though they’re the opposition, it was really upsetting to see and as a coach who’s coached women’s footy for so long, you just don’t want to see it,” Steen said. “It’s disappointing for everyone in this competition that someone like that is not able to play in the grand final.”

Steen also acknowledged a number of other key talents including defenders Kiera Mueller and Maya Rigter, on-baller Alisha Gepp, ruck Zoe Prowse and Under 16s talent India Rasheed. Steen coached Rasheed at her school when she was 13, so is fully aware of the damage she could cause. Despite the talent on the opposition, the North Adelaide coach said that they would be focusing on their own game plan.

“Footy’s a game of chess, so you see what works and what doesn’t, we’ll see what they do, and we’ll potentially react to that,” Steen said. “They’ve got some great players, but I think our best is better.”