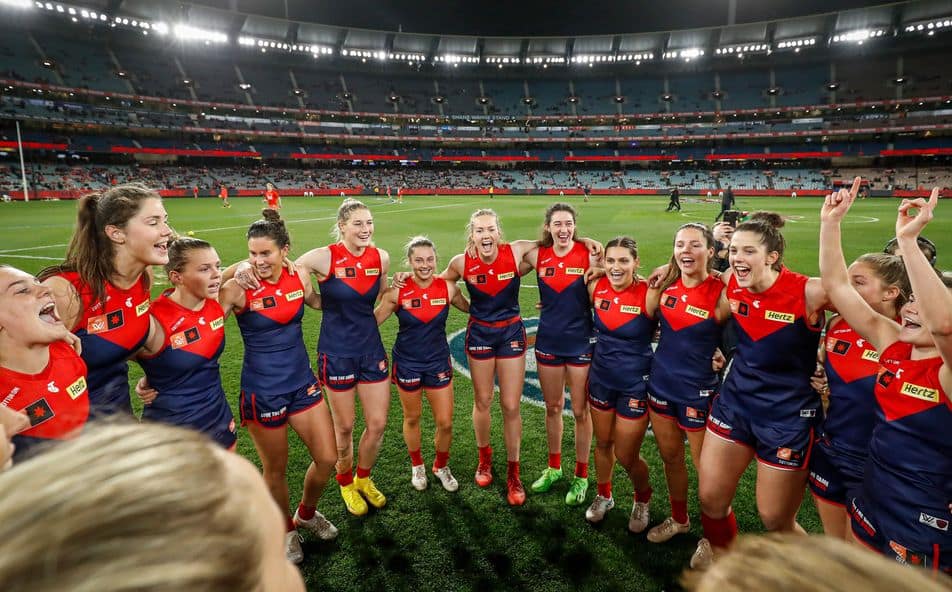 MELBOURNE was able to withstand just about everything North Melbourne threw at them to win by two points at the MCG last night and keep their AFL Women’s season undefeated. It was a fiercely contested clash that saw North Melbourne start on top but in the end the Dees’ inaccurate kicking and last ditch defensive effort were the difference.

A match up that continues tradition

One thing that people are now used to in matches between the Dees and Kangaroos is that the final margin is never big, and last night’s game did not change that. Last night’s margin of two points continues the competition long stretch of games between the pair finishing with a margin no higher than 10 points. The game was made all the more special being played on the MCG, and it was fitting in her 50th game, that Emma King slotted the first goal of the match.

The physical pressure from both sides was intense

Physical pressure is just one of those facets of a footy game that is hard to measure on the stats sheet, but is certainly evident on the field, and last night’s clash was no different. The physical pressure from both sides was very high, which is what you want and expect from two sides of this quality. Although not all tackles were stuck, the pressure around the ball from both sides meant that those with the ball were often very fumbly, and good clean possessions were hard to come by. Dees coach Mick Stinear described his club as “clunky” and credited North’s pressure. Ash Riddell laid a game-high eight tackles to go with her 26 disposals.

There is no denying that Karen Paxman is an absolute star of the competition, but the way she is playing this season even two rounds in, you would be forgiven for thinking she is at least 10 years younger thAn she actually is. As remarkable as it sounds, Paxman has somehow taken her game to another level in the offseason and her ability to make a difference with and without the ball is just exceptional. Both her and skipper Daisy Pearce both led from the front last night and had exceptional games.

North Melbourne won the midfield battle with a comprehensive plus-10 in clearances, highlighted by star Jasmine Garner who won 10 clearances herself from 22 touches. Mia King and Jenna Bruton had four apiece, with the trio combining for only two less than the entire Melbourne side (10). Tyla Hanks lead the Demons with four. Libby Birch (nine intercepts), Sarah Lampard (eight) and Shelley Heath (seven) all stepped up in defence for the Demons.

The game showed the true character of both sides

An epic tussle like last night’s clash was does not merely end without some sort of picture being painted, and last night’s clash really did show where both sides really sit in the pack. For the Dees, it was another affirmation that they can withstand whatever their opponents throw at them and still get the chocolates, while for North it showed that they can match it with the best in the comp, but they just need to create a couple more scoring opportunities for themselves while limiting the opposition’s.