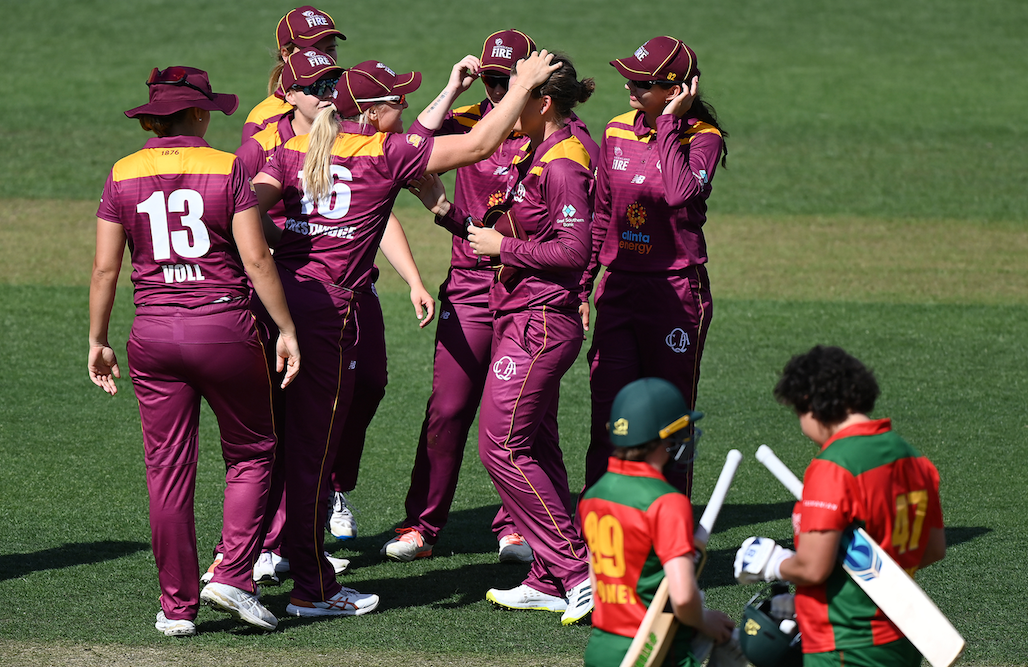 QUEENSLAND Fire’s Jessica Jonassen has skittled Tasmania Tigers on the opening day of the 2021/22 Women’s National Cricket League (WNCL) season to help her side to a 66-run win. The Fire made 8-265 from their innings, before bowling the Tigers out for 199 in 44.2 overs at Blundstone Arena.

Tasmania won the toss and elected to bowl first, sending the Queensland side into action with the wicket looking a little green. After a strong second over from the Queensland side, the Tasmanians took an early wicket, with Georgia Redmayne edging a shot to Rachel Priest off a Belinda Vakarewa ball to snare the early wicket. Both Charli Knott and Georgia Voll were striking the ball well and running at a 60 per cent strike rate, something that would stand throughout the middle order. The pair made a 49-run partnership before Knott fell, with Heather Graham taking her first wicket.

Grace Harris arrived at the crease, and both her and Vole would build another 47-run partnership, before Maisy Gibson would strike well to take out Vole. Harris and incoming batter Mikayla Hinkley would prove to be the match winners though, producing 64 and 72 runs off 84 and 94 balls respectively, and a combined 10 boundaries. They both finished with a strike rate of 76 per cent, and Hinkley would only be run out on the final ball.

Instead their 112-run partnership would be a sticking point for the Tasmanian bowlers, as Graham took another couple of wickets and Molly Strano would grab one, and Hinkley’s run out. Overall, Graham’s 3-42 off 10 overs was the pick of the bowlers, with Gibson and Strano also managing an economy rate of just over four with a wicket each. For the batters, Hinkley and Harris were the dominant ones, but the middle order stood up after the early wicket of Redmayne fell.

Chasing a huge total of 266, Tasmania really needed to dig deep on its innings in front of home fans. After a quick-fire seven runs in nine balls, Elyse Villani was taken out early courtesy of Meagan Dixon. Priest and Nicola Carey steadied with a 54-run partnership, before both Priest and Graham fell within two runs and all of a sudden the Tigers were 3-63 after being 1-62. Carey would play a lone hand for Tasmania with the bat, striking five boundaries in her 74 runs of 95 balls.

She would watch partners Naomi Stalenberg (18), Strano (19) and Emma Manix-Geeves (seven) all fall, and once Carey went down with the team at 7-180, the writing was on the wall. Jonassen claimed her second wicket with the breakthough Carey wicket, then would skittle the lower order with Gibson, Amy Smith and Vakarewa to finish with 5-24 off 9.2 overs with an outstanding economy rate of 2.57. Dixon and Georgia Prestwidge also took multiple wickets, with Dixon an impressive 2-28 off eight overs and an economy rate of 3.5.

Tasmania will sought revenge against Queensland tomorrow morning, back at Blundstone Arena.