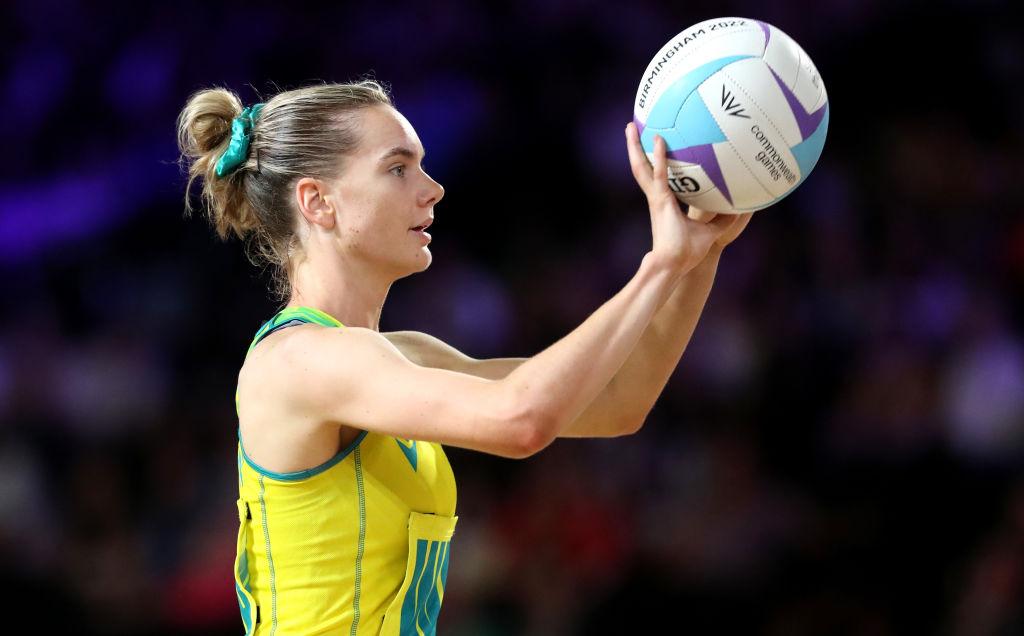 THOUGH it always seemed like fait accompli, Australia and Jamaica have officially qualified for the 2022 Commonwealth Games semi-finals. Winning their penultimate Pool A matches overnight means both nations have gone 4-0 and cannot be knocked out of the semi-finals places. In eerily similar scorelines, the Diamonds and Sunshine Girls defeated Wales and Scotland by 46 and 44 goals respectively to set up a tantalising final round clash to effectively determine which team will top the group.

Australia ticked off the final box of its regulation wins, defeating a spirited Wales outfit by 46 goals in the opening match of the day. The Diamonds were dominant across the first three quarters on the offensive end, and while Wales did manage 11 goals in the opening term, it dried up after that, only managing the single digits per quarter for the rest of the game. In total, the Diamonds ran out 79-33 winners, with the last quarter being a lower scoring one, but the job was done by that stage.

Australia started circle defender Sunday Aryang in wing defence for the game, allowing Courtney Bruce and Sarah Klau to hold up the circle roles. Ash Brazill was in centre, with captain Liz Watson feeding to the duo of Gretel Bueta and Cara Koenen. It stretched the Welsh defence with the two-tall attack, which mean Christina Shaw and Ella Powell-Davies had a touch job on their hands. Nia Jones captained the side from her usual spot on wing defence, but impressively, goal shooter Georgia Rowe was the only Wales player to spend the entire match on court, with the side rotating between Betsy Creak in the first half and Eleanor Roberts in the second.

By the final buzzer, Koenen had piled on 49 goals from 54 attempts, one of two Australians not to miss a second of the action, with Bueta (26 from 27, five gaol assists and three deflections) and Steph Wood (four goals at 100 per cent, eight goal assists, one gain and one intercept) providing the firepower. Kiera Austin continued her stint at wing attack from the second term, replacing Watson and having 25 goal assists from 26 feeds, four deflections and a gain. In defence, Sarah Klau – who also spent every minute on court – finished with nine gains, three intercepts, seven deflections and two rebounds.

Rowe scored 16 goals from 18 attempts and had two rebounds to try her heart out, while Creak shot 11 goals at 100 per cent in 30 minutes of action. Powell-Davies (six deflections, one gain and one intercept) and Shaw (three deflections, two gains and one intercept) were consistent in the defensive goal circle, while Bethan Dyke (nine goal assists from 13 feeds) and Shona O’Dwyer (four from eight) tasted what it was like against the best nation in the world. Roberts did well with her feeding, producing six goal assists to go with her six goals.

A stunning 25-6 opening term allowed Jamaica the flexibility to storm to a 44-goal win over Scotland and secure its semi-final place. The Sunshine Girls dominated in the first quarter, but then Scotland surprised the highly touted side with an impressive second term, only losing the quarter by three, and doubling its total goals from the first 15 minutes. Jamaica got back on top with a refreshed lineup in the second half and another huge term of 21-5, before eventually taking out the match 78-34.

Unlike last game against Barbados, Jamaica started world class shooter Jhaniele Fowler on court, teaming up with Rebekah Robinson. Fowler would be near unstoppable with Lauren Tait and Emily Nicholl having their hands full in the circle defence. Khadijah Williams got the start at wing attack, with Adean Thomas battling away against Hannah Leighton in the centre. For the Thistles, Bethan Goodwin and Niamh McCall started, with no player on the court playing the full 60 minutes in a heavily rotated game for both sides.

Though Fowler would only play a half, she still shot 37 goals at 100 per cent and then rested up for the huge clash against Australia. Fellow Suncorp Super Netball (SSN) shooter Shimona Nelson came on at half-time and scored 33 goals from 35 attempts, also pulling down three rebounds, while Robinson (three from six and eight goal assists from 11 feeds) and Shanice Beckford (five from six and 11 goal assists from 12 feeds) all had their chances.

For Scotland, Goodwin shot 18 goals from 19 chances, as Emma Barrie (12 from 17) played a half, and McCall (four from eight) was up against it. Iona Christian had the most goal assists with nine, and also picked up two deflections, while Leighton managed the seven goal assists and one deflection. In defence, Rachel Conway came on for the second half and picked up two gains, one intercept and three deflections to do the most work statistically of the Scottish back third.

For the matter of Pool placing, Wales will take on South Africa tomorrow, while in the latter session, the bottom two nations in the group, Scotland and Barbados will face off.