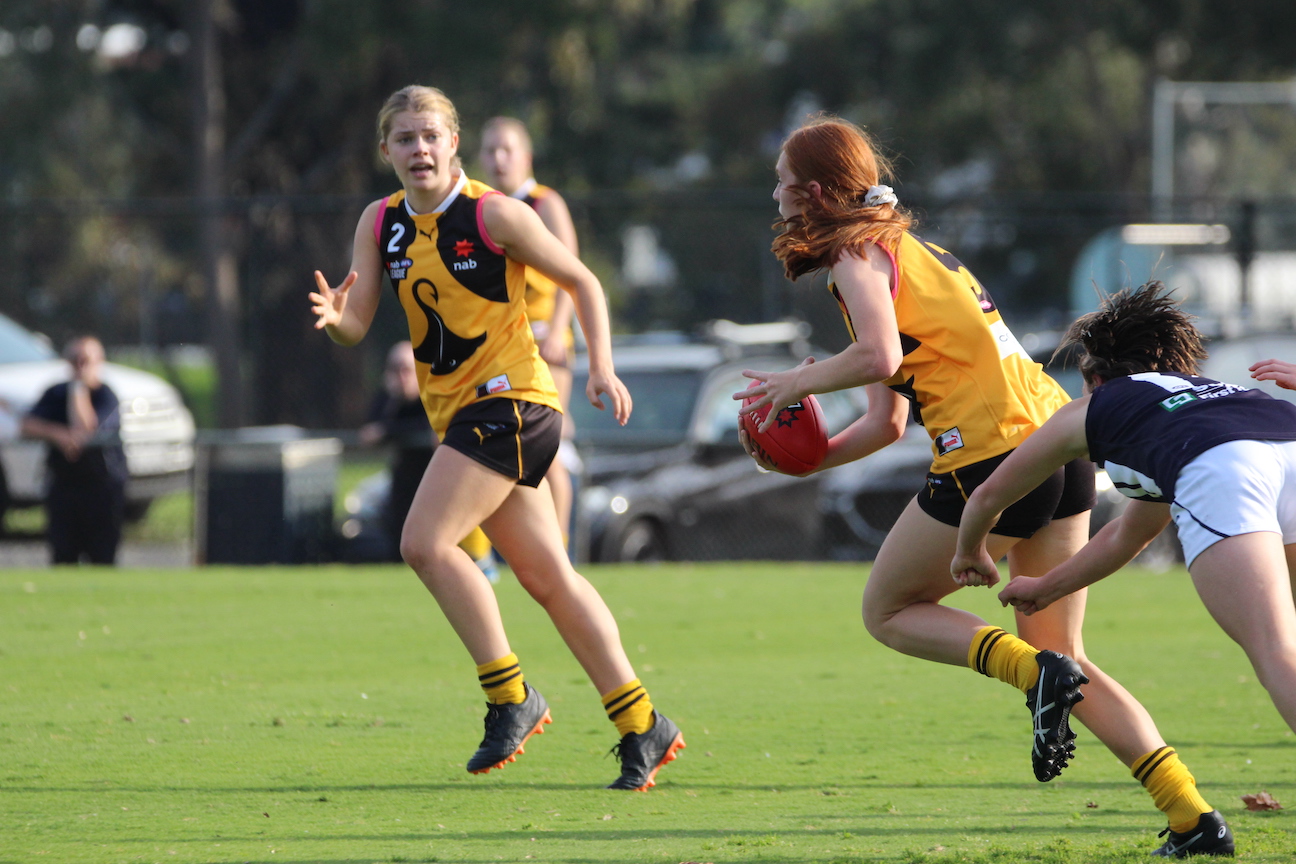 HEARING that she had been invited into the 2022 AFL Women’s Academy, Dandenong Stingrays‘ Mackenzie Eardley was thrilled. Having worked hard over the past two seasons at NAB League Girls level, Eardley has emerged as one of the more impressive – and versatile – talls going around. Though she has been a familiar face around the NAB League Girls and AFLW Under 19s Championships, Eardley took the more traditional route through the pathways.

“I started off playing for Beleura in the first league down on the Mornington Peninsula,” Eardley said. “Then I got into the Melbourne Academy  and then interleague, through to V/Line. “Then Matt Crozier took me into the Stingrays program. “I’ve been there for the past three years.”

Last year, Eardley earned a place in the Vic Country Under 19s squad as a bottom-ager. It not only ticked off a goal of hers for 2021, but exceeded it, having only expected to reach the Under 17s side last year.

“It was an amazing experience, it was one of my goals to at least get into the Under 17s Vic Country,” Eardley said. “So when I got into the Under 19s I was absolutely stoked. It was just having the experience to play with older girls and their skill set and the way they went about the game. “I think it was just incredible to be around and I think it taught me a lot to be in an elite environment as well, and had amazing coaches.”

Her achievement therefore made it less surprising that she earned a place in the Vic Country hub for 2022. Though now she was back with teammates her own age, which meant learning a lot of new names.

“The Vic Country hub we’ve had two camps. It’s almost a whole new group of girls. I’m getting to meet a whole lot new people,” Eardley said. “They’re a lot younger, but it’s good to see the future as well, like the Under girls as well. “But their skills, the more we train the better we are just getting, and it’s awesome to see that and get to play with that as well.”

Eardley not only got into the Country hub, but the AFL Women’s Academy too, which she said put a “positive light” on her top-age year. Thought she was taking nothing for granted, she was well aware of the opportunity in front of her.

“I’m hoping being in the Academy, that I really stand out, and the end result getting drafted is definitely the main goal,” Eardley said. “But really keep developing on my skillset, not just on the field, but off the field as well. “Really develop my leadership as well, that’s probably my main goal.”

Eardley said she got along well with fellow Country representatives, Kalani Scoullar, Octavia Di Donato, Keeley Skepper and Paige Scott. Though she was looking forward to playing alongside them at the national carnival, she would be opposing them in the NAB League Girls competition. Playing as a key defender who can play up the other end as well, Eardley said she was likely to remain in the defensive half of the ground, but knew she could play a different role if asked to do so.

Looking at her individual game, Eardley listed her main strength as her versatility, with a few other areas where she can have an advantage over others.

“I think being a key position I’m able to be put back which is obviously my preferred position, but I can go forward, I can go in the ruck if need be,” Eardley said. “I definitely think that’s a strength, as well as my ability to read the game. “I feel like it’s important as a key backman to do that, and I think that’s helped me stand up above other backmen as well.”

As for her improvements, Eardley wanted to sharpen up areas of her game that could build her impact even further, as well as increase her strengths.

“I’m looking to improve on my marking,” Eardley said. “It’s been a strength of mine, but I think to stand out even more I need to take that to the next level, and it’s also reading the game’s good, but you need to be able to take that intercept mark and really hold it to be any benefit to the team really.”