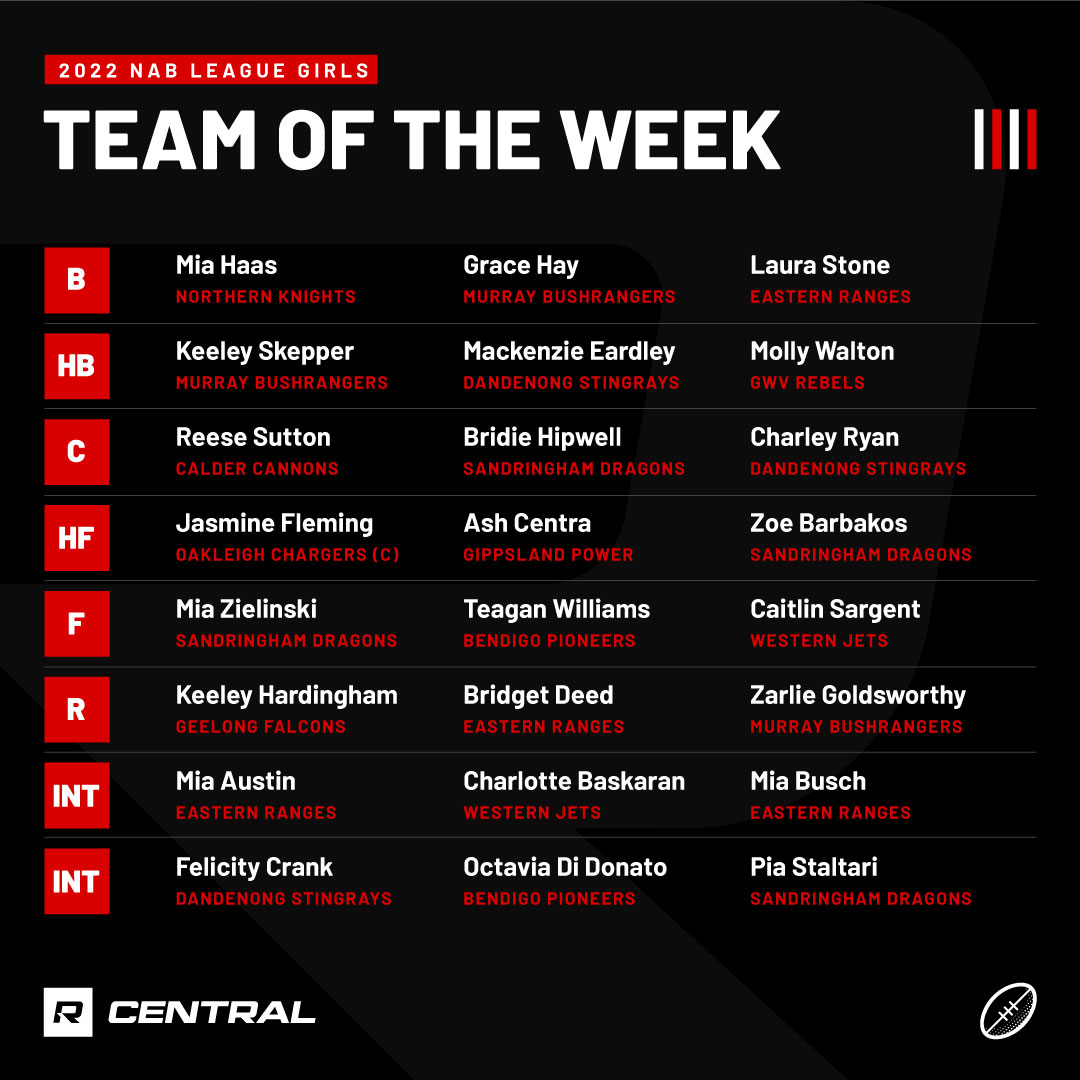 ARGUABLY the best game of Round 6 has provided seven players in the latest Rookie Me Central NAB League Girls Team of the Week. Split four and three between the Eastern Ranges and Dandenong Stingrays respectively, each representative showcased the sheer quality on show between the league’s undisputed top two sides.

Elsewhere, the Sandringham Dragons claimed a record-breaking win and also have four representatives, while Murray Bushrangers have three mainstays despite their loss, and the Western Jets and Bendigo Pioneers each have two. Check out the full squad, including three emergencies, below.

It was hard to look past Oakleigh Chargers star Jasmine Fleming for Round 6 Player of the Week honours. Stationed mostly forward with some time in midfield, the AFLW Academy member notched 24 touches and booted three goals in a performance where she seemed determined to prove a few points. Fleming utilised her left side more and was combative at the contest, making for a well rounded and impactful game which spurred Oakleigh to a much needed victory. Most impressively, she did so after missing the last two weeks.

This week’s team is blessed with a couple of dynamic key defenders, and potential Vic Country teammates in Mackenzie Eardley and Grace Hay. Both players have missed games this season, but displayed their quality in differing results. The versatile Eardley returned with vigour as her Stingrays got up in a thriller, while Hay was resolute as her Bushrangers went down by a point.

From the same games, Laura Stone had a standout performance in Eastern’s defence, while Hay’s teammate Keeley Skepper again earns a spot at half-back for her continually strong form. For Northern, Mia Haas was a rock in the first half and rounds out the back six along with Molly Walton, who collected 29 disposals in midfield for Greater Western Victoria (GWV) but is quite familiar with the backline.

Competition for midfield spots is always tough, and it showed with how some were squeezed onto flanks and the wings. Despite featuring at centre bounces and rotating forward, Charley Ryan and Reese Sutton have both been selected on wings for their contributions in wins. In between them, Sandringham’s Bridie Hipwell features at the heart of midfield after her ominous display, also shifting forward from the engine room.

Hipwell is joined by some esteemed company on-ball. Eastern Ranges captain Bridget Deed essentially picked herself once again, as did Murray bolter Zarlie Goldsworthy who fought hard to try and drag the Bushies to a win. Undeniable in the ruck spot is Geelong’s Keeley Hardingham, who lead all comers in the Falcons’ loss to Western. Good luck getting the ball off that lot.

Once again, there are plenty of goals among the forward bunch. Barring 2006-born Gippsland prospect Ash Centra, each representative snared at least three majors – lead by a bag of four from Sandringham speedster Zoe Barbakos. Her Dragons teammate Mia Zielinski spearheaded her side’s big win, while Fleming’s exploits are known, and Caitlin Sargent‘s effort of 3.3 helped Western put up a winning score.

Centra, who returned to the fold in Round 6, was exceptional in a 99-point loss with her ability to impact both in the air and at ground level. She booted one goal and had a direct hand in the Power’s only other. Rounding out the front six is Tegan Williams, who snared three majors as Bendigo went down to Calder.

There is plenty of quality on this week’s interchange, which features another six top performers. Jets skipper Charlotte Baskaran put in a standout shift for her side, making into the squad safely for another week. Eastern pair Mia Austin and Mia Busch were hard to deny for the same honours having impressed at opposite ends of the ground, and in the same game Felicity Crank worked tirelessly for the Stingrays to earn her spot. Elsewhere, Bendigo’s Octavia Di Donato again racked it up in midfield, and Pia Staltari snuck in as Sandringham’s fourth representative.

As always, there were also a few unlucky players to miss out. Eastern almost had five in the squad after Alyssia Pisano‘s three goals. Unfortunately, the forward went down with what looked like a serious knee injury in the final minute of Sunday’s game. Emily Shepherd was also impressive in big moments for Dandenong, while Sofia Hurley lead all comers in Sandringham’s dominant victory.

ROOKIE ME CENTRAL NAB LEAGUE GIRLS TEAM OF THE WEEK: ROUND 6