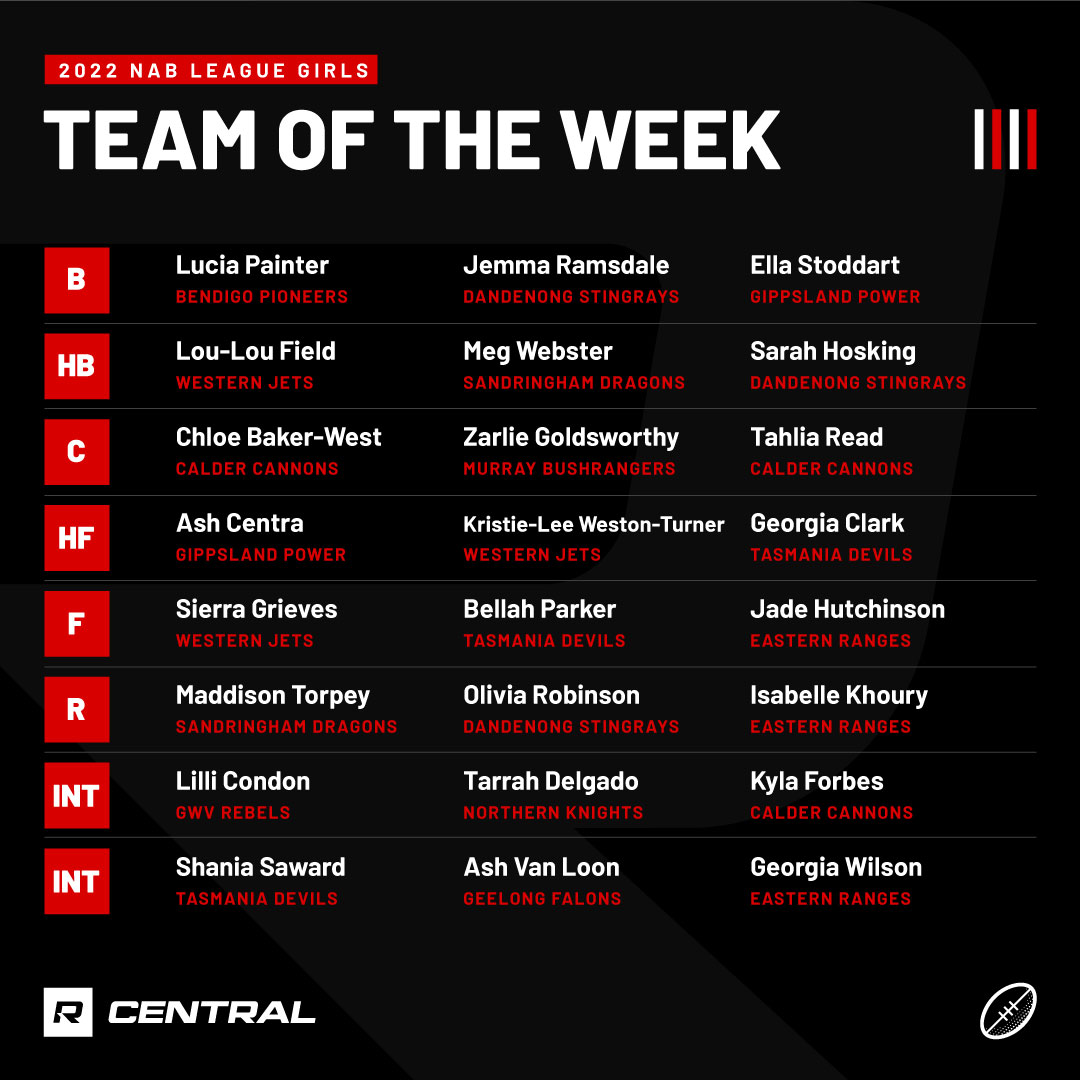 EVERY participating NAB League Girls region is represented in our Round 9 Team of the Week, with five winning regions contributing three players each. On a weekend which hosted Victorian representative action, plenty of fresh faces took the opportunity to snatch centre stage. Check out the full 24-player squad, including three emergencies, below.

Having most likely narrowly missed out on the final Vic Country squad, Dandenong Stingrays midfielder-forward Olivia Robinson was a clear choice for Round 9 Player of the week honours. The top-ager dominated in her side’s latest outing, a 21-point win over the Northern Knights on Saturday. She won 12 more disposals than any other Stingray, leading all comers with 26 touches and snaring two goals to put the cherry atop a very sweet day out.

There is a good mix of age groups among this week’s back six, but the under-age talent is extremely noticeable. There is a record breaker among them, with Bendigo’s Lucia Painter setting a new league benchmark of 16 rebound 50s in her side’s loss to Tasmania.

Dandenong is represented by a couple of backs, starting with Jemma Ramsdale on the last line. Her balance of attack and defence was impressive in Round 9, as was Sarah Hosking‘s turn of speed off half-back and the wing. The latter was also Dandenong’s captain for the weekend.

Four different regions are represented in the starting centre bounce mix, which is lead by Player of the Week, Robinson. Joining her on-ball are Murray mainstay Zarlie Goldsworthy and Eastern over-ager Isabelle Khoury, who were both instrumental in their respective sides’ wins. Sandringham tall Maddi Torpey rounds out the quartet, having showed promise in the ruck.

Balancing out the centre bounce diversity is a distinct Calder Cannons flavour on the wings. Top-ager Tahlia Read takes up one spot despite much of her work being done in the forward half, while exciting 2007-born talent Chloe Baker-West comes in on the opposite wing after her display on the outer in the Cannons’ win over Sandringham.

It is hard to go past two Tasmania Devils representatives when looking at this week’s front six. Georgia Clark and Bellah Parker combined for a whopping 17 scoring shots, including seven goals as the Devils got up up 106 points at home. Those two aside, the mix was a tough one to make as many forwards performed well in Round 9.

Western is the other region with two forwards in the starting side, with under-ager Sierra Grieves picked in the pocket and double-barrel bottom-ager Kristie-Lee Weston-Turner coming in at centre half-forward after arguably putting in career-best performances.

Rounding out the six, Gippsland sensation Ash Centra returned one of the great first half performances to earn her spot in the team, while Eastern over-ager Jade Hutchinson made it two Ranges in the starting side after booting two goals from 20 touches.

There is a good amount of experience on this week’s interchange bench, with three over-agers – Lilli Condon, Tarrah Delgado, and Georgia Wilson – selected. Like Condon (GWV) and Delgado (Northern), Ashleigh Van Loon is her side’s lone representative this week, while Shania Saward (four goals) made it three for Tasmania, as did Kyla Forbes for Calder.

ROOKIE ME CENTRAL NAB LEAGUE GIRLS TEAM OF THE WEEK: ROUND 9