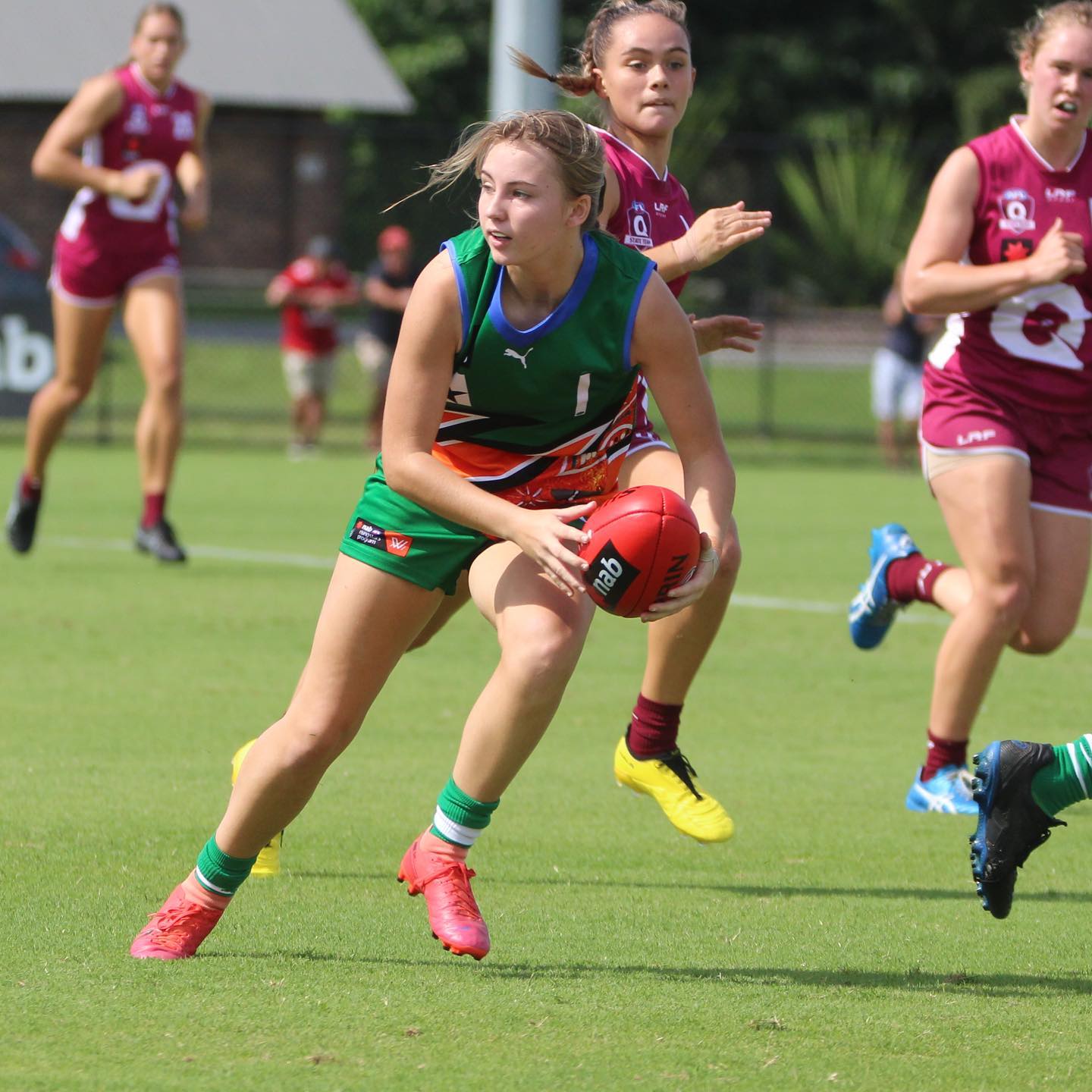 THE 2022 AFLW Under 18 National Championships drew to a close over the weekend, as Queensland picked up its second victory of the carnival with a 50-point thumping of the Allies. As there has been throughout the competition, there were a number of impressive individual performances, of which we outline in the latest edition of Scouting Notes.

Despite being smaller than most other players on the ground, Smith was one who consistently applied herself to the contest, and made her impact felt around stoppages as she led the game with eight clearances. Smith chose to kick for more often than handball, and with how well she used it by foot it’s no surprise why, as she weighted her kicks well for teammates to run onto well. Smith had a real purple patch of form in the second quarter, where in the space of two minutes she took a couple of intercept marks and hit up leading forwards when she sent the ball back.

Similar to Smith in a sense as they both applied themselves to the contest, Harrington stood out with how well she handled contact through the game, with a couple of clean ground balls and quick flicks by hand whilst being bumped standing out. Harrington’s ability to hold her balance despite this was impressive, and played a big part in her ability to give off clean handballs to runners from the bottom of packs well.

Milne split her time between the midfield and forward line, although featured far more heavily in the forward half after copping a heavy knock in the second quarter, and made the most of her opportunities to slot two goals, the equal highest of the game. Milne was a big driver of the ball going forward for Queensland, registering a game-high eight inside 50s as she generally looked to get the ball going forward as quickly as possible

Mullins was a workhorse early on in the game, even when Queensland weren’t getting many opportunities with the ball, she managed to impact the contest with her run and carry from the outside, as well as smart positioning to get on the end of some switch kicks and continue moving the ball forward. Mullins kicking was solid for the game, despite some not paying off as well as she would have hoped for, she showed a sound technique and solid placement

Starting the game in the backline and moving more into the middle as it drew on, Evans was one of the shining lights in the Queensland backline early on despite the scoreboard at quarter time, backing her run and carry more often than not and sending the ball long to give her defence more time to reset. Evans positioned well wherever she was put on the ground, always being around the drop of the ball in the backline or in a good spot around stoppages.

Unsurprisingly, Gee was arguably best on for Queensland and their most consistent performer across the four quarters. Early on when Queensland were struggling, Gee was often seen pushing into defence to add an extra number and move the ball out of the back 50 well, with one play seeing her take an intercept mark on the defensive 50 mark, hand the ball off well to a runner and then follow up to get it back, earn a free for push in the back then hit up a leading forward well, highlighting her work rate in transition both offensively and defensively. It’s no coincidence that when Gee started to find her groove more around stoppages that Queensland started to get on top, as she found ways out of congestion and chose the best option available to her almost every time.

Despite being the youngest player afield, Harris showed some real promise with her ruck work and forward craft, seeing her end the game with an equal high of two goals. Harris was always active in the forward half with her leading, seemingly always involved in any of Queensland’s inside 50s early on. She slotted Queensland’s first of the game with a set shot from around 50 out, and demonstrated that despite being 182cm already, she’s extremely effective at ground level, slotting her second after following up on a spoiled marking attempt and dribbling it through from tight on the boundary line.

Despite the loss, it could be argued that Barwick was the best player afield for the day, with her clean hands and sheer tenacity at the contest standing out. Barwick simply didn’t quit all day, doing everything she possibly could to keep the Allies in the contest. It was a common occurrence to see Barwick dive into a contest to get to the ball first, hand it out to a runner and then quickly get back to her feet to try and get it back, constantly looking to drive forward and work hard in transition to pressure opposition players. Barwick backed her speed and agility in tight through the contest to work her way out of congestion, then use the ball well by foot to a leading teammate.

Despite what ended up a bad day to be an Allies defender, Parnell is one that can hold her head up high and be proud of her efforts for the day. The Northern Territory product was simply a rock in the Allies defence, punishing Queensland for any kick that wasn’t near perfect they sent forward with her intercept marking, and positioning to get a fist in and spoil marking attempts. As the game drew on, Parnell’s impact was felt more and more as she never let up.

The AFL Academy member was another that can feel proud of her efforts from this contest, starting the game up forward and showing off some smart body work to kick a goal, Anderson was quickly moved into the midfield where she used her strength to her advantage to win some footy in tight. Anderson typically used the ball well, but at times did looked rushed as Queensland players began to step up around stoppages.

Typically one that spends most of her game time inside the forward 50, Clark showed through the contest just how impactful she can be even when things aren’t going in her sides favour, as she worked hard up the ground to begin winning the ball further afield, or led well to be used as a link up sort of player. Clark looked one of the better users of the ball on the day, with her kicking particularly damaging as she looked for switch options or shorter more inside kicks to aid her side going forward.