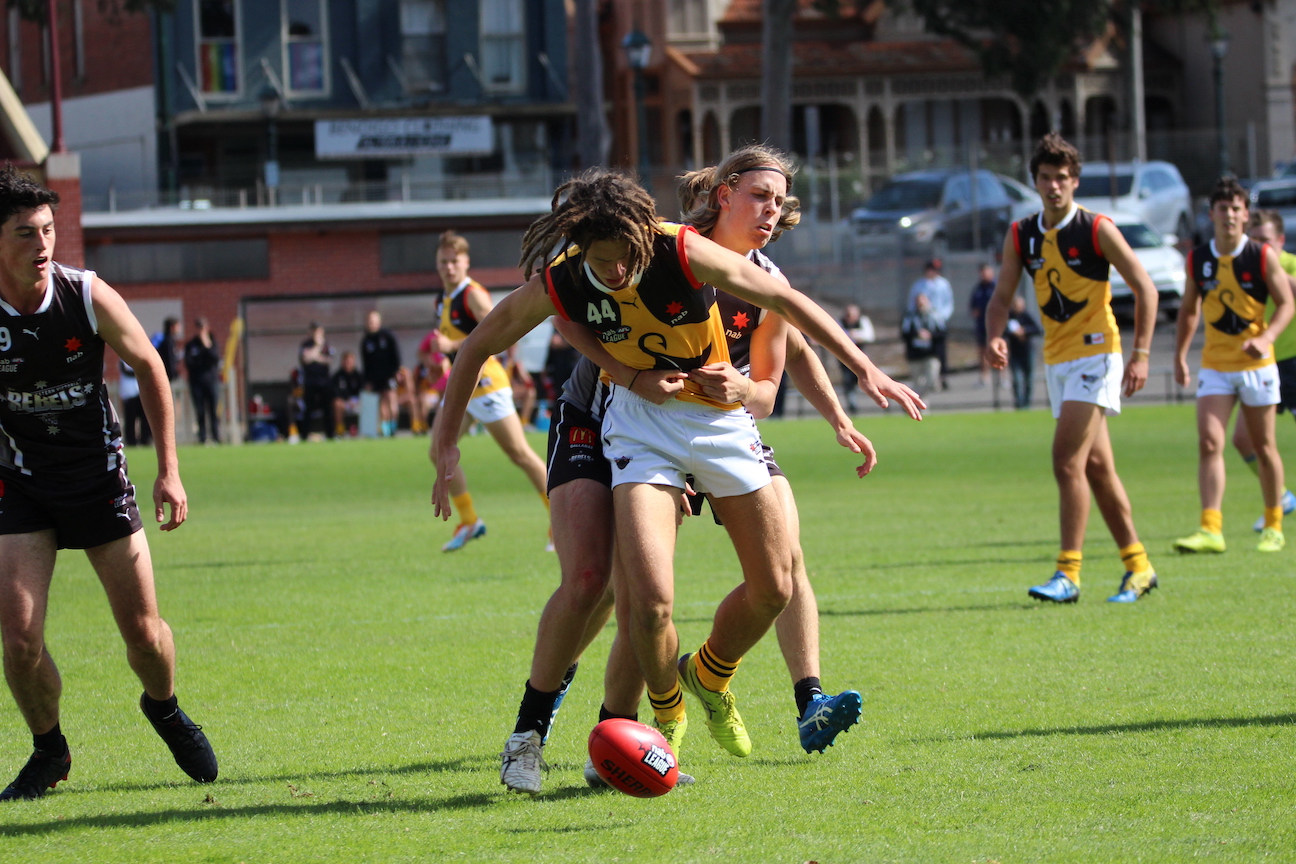 THE 2022 AFL Mid-Season Rookie Draft is fast approaching, with the intake set to get underway at 6:30pm tonight. More than 200 players have nominated, though up to just 23 will end up on an AFL list with only three clubs – Brisbane, Melbourne, and the Western Bulldogs – not taking a selection into the draft.

>> SCROLL for the full draft order

At the close of yesterday afternoon’s deadline, eight clubs had opened up another list spot, though not all 23 picks are expected to be used should targeted players be snaffled up early in the piece. A total of 35 selections have been made over the last two mid-season intakes, with 22 coming last year.

Last month, Rookie Me Central gave an insight into 24 players in the mix to be picked up and today, we take a look at how the draft may pan out and what each of the most talked-up prospects will offer their potential suitors.

>> THE ONLY EXEMPTIONS – MID-SEASON DRAFT ANALYSIS

WHICH CLUBS HAVE PICKS?

As per the official draft order below, West Coast holds the first pick and is eligible to make two selections on the night. Other clubs which hold multiple picks include North Melbourne, Essendon, Adelaide, Hawthorn, Collingwood, Carlton and Fremantle, though they are not required to utilise them.

WHO GOES PICK ONE?

This is an easy one – Jai Culley. Clubs are just about certain West Coast will swoop to make the Dandenong Stingrays product an Eagle, after the 19-year-old’s undeniable rate of development in 2022. He is somewhat of a late bloomer having come into the NAB League only last year, but has improved out of sight to become a dynamic midfielder-forward who, at 193cm, uses his frame and skills to dominate both on-ball and inside 50.

HOW DOES THE TOP-END PAN OUT?

The pieces will fall into place quite quickly, as is often the case with rookie intakes. After West Coast picks up Culley, as most expect, North Melbourne has a massive decision to make. The Roos have been linked with a key defender and it seems Kallan Dawson is their man, a fast-developing type from Williamstown in the VFL. This comes despite incurring an ankle knock on the weekend.

Western Jets and Richmond VFL young gun Massimo D’Ambrosio is also in consideration for the Kangaroos, who are desperate for classy ball users from the back. He fits the bill perfectly. Both Essendon and Adelaide will have West Adelaide midfielder Josh Carmichael in their sights. The big-bodied ball winner would be an ideal point of difference for the Bombers at pick three.

The Crows could still dip into the SANFL pool should Carmichael be off the board, with Glenelg midfielder Brett Turner in contention. North Adelaide’s Jacob Bauer, who is also on the radar of many clubs down the line, would arguably be another shrewd choice given the x-factor he offers, and Adelaide lacks.

After the success of Jai Newcombe, Hawthorn may well look towards its VFL program for some additional talent. James Blanck has made great strides and added size to his frame as a mobile key back, while Geelong could follow a similar path with Oskar Faulkhead. The Bendigo Pioneers graduate has been super classy in 2022.

Sandringham has been a happy hunting ground for St Kilda, and Hugo Hall-Kahan is a long-term prospect with plenty of versatility to consider. Wade Derksen is another in that boat and will appeal to clubs who require some key position depth at either end of the ground.

Carlton is a side which needs exactly that, and should Bauer be off the board, the Blues have been heavily linked with former North Melbourne draftee Sam Durdin, and former Brisbane Lions tall Connor Ballenden. The high- flying Victorian club is also in need of a specialist winger – enter Lachlan Carrigan.

Of course, another name which may throw a spanner in the works atop the order is Max Ramsden. Likely to also come into contention as high as pick one, the Sandringham Dragons ruck has plenty of upside with his athletic profile and ability to get from contest to contest.

Others who will likely enter the frame include Ethan Grace, a crafty small forward out of the GWS Academy, and former Sydney rookie Malachy Carruthers. Tasmanian pair Mitchell O’Neill and Jye Menzie are also in with a shot, while plenty has been made of Casey Voss‘ chances.

In terms of the highly sought after key defenders, Brynn Teakle and Mutaz El Nour are a couple out of respective state leagues, as is Will Reinhold. Speaking of, South Fremantle gun Jake Florenca stands a good chance of landing a permanent spot having already made his league debut with West Coast. 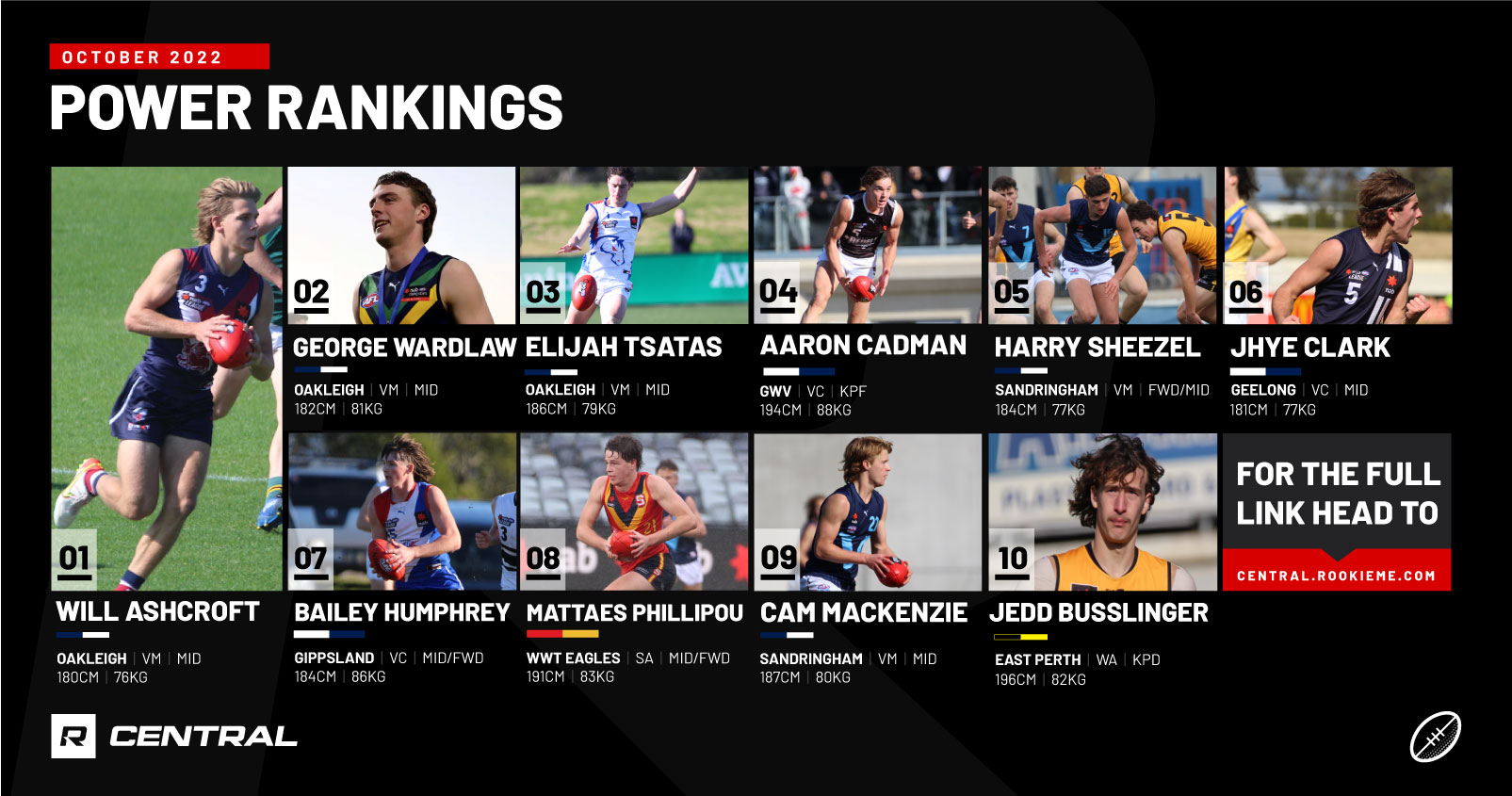 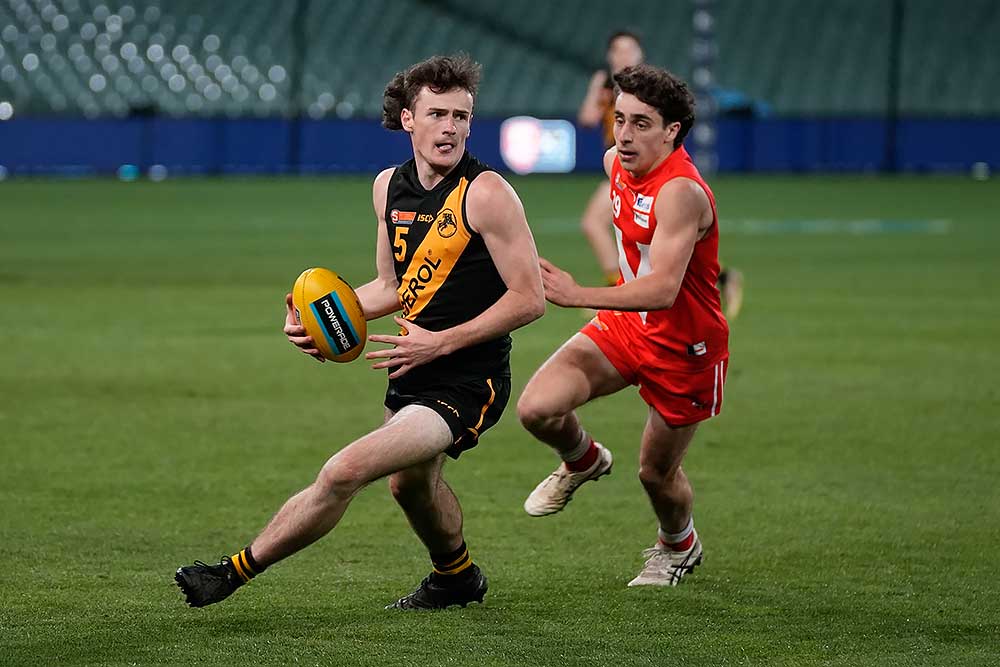 TWO big junior grand finals took place last weekend, with North Adelaide taking on Glenelg in South Australia, and the return of the NAB League Grand Final in Victoria between Dandenong and Sandringham. North Adelaide and Glenelg looked like the likely grand finalists from a long way out, with both teams hitting the ground running […]