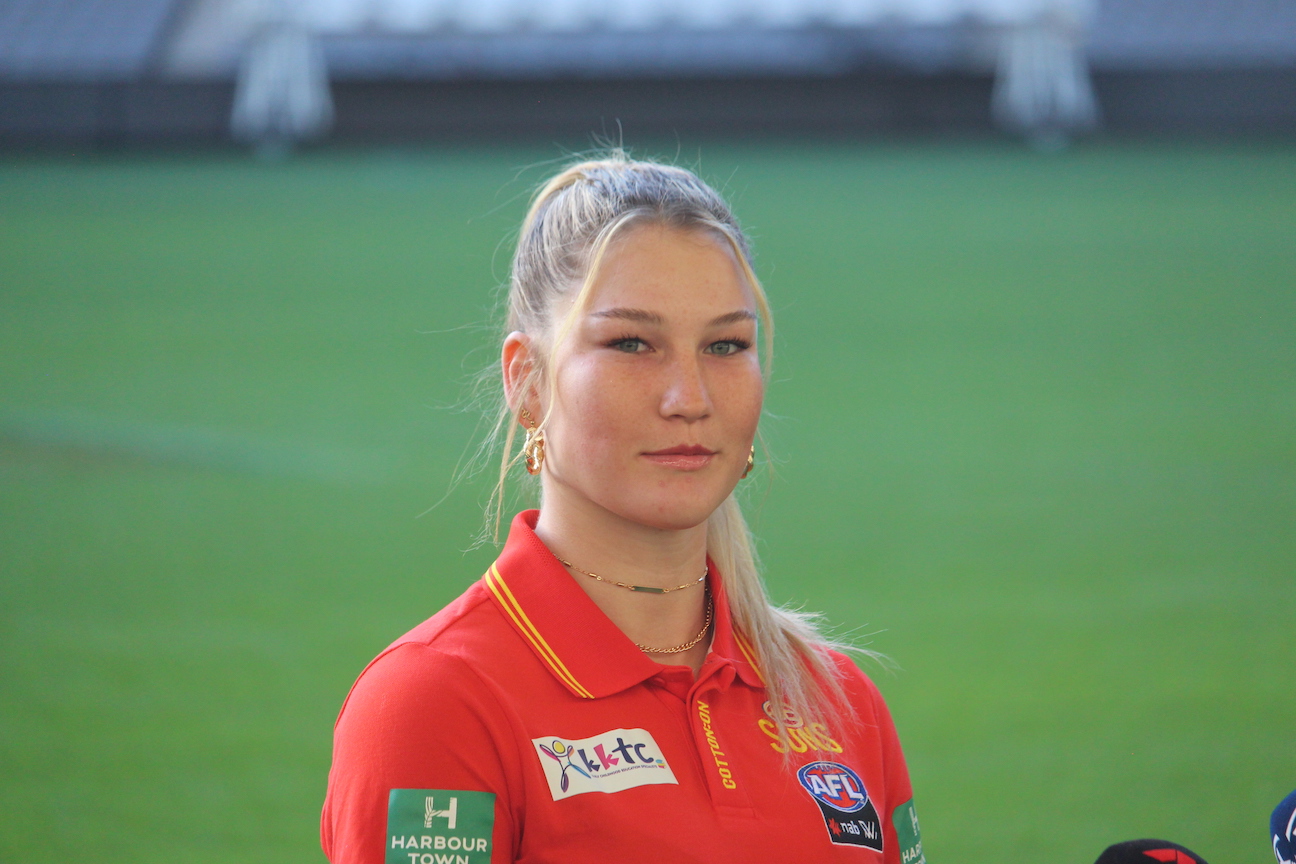 THERE were no real surprises when it came to AFL Women’s Draft night for the Gold Coast, who picked up the three players that were expected pre-draft, and then passed for an experienced selection with the fourth pick. The Suns showed great improvement under new coach Cam Joyce in season 2022, and will be looking for more of the same – and greater – in Season 7. Joyce will team up with a former Tasmania Devils young star, as well as two of the Gold Coast Suns Academy’s brightest prospects. With an AFLW-experienced forward-midfielder to complete the quartet, Joyce has added fantastic depth to an already exciting squad.

Speed and skill. The Suns are a side that love to move the ball, and while they can sometimes get caught out on transition, when they are in full flight, they are an exciting team to watch. They will only improve with more experience under their belts, and the players selected can certainly run and carry, but also use the ball well by hand or foot. They can play onball or off flanks or pockets in the forward half, also emphasising impressive versatility.

Gee looms as a Rising Star contender for not only her athleticism and skill, but also her ability to find space and accumulate with ease. Smith can win the inside ball, play off a wing or be a pressure small forward, while Ransom is a smooth-moving midfielder who spent a lot of time in the forwardline for Tasmania Devils and the Allies in the second half of the junior season, overcoming injury. Atkins is a readymade talent unlucky to be cut from the Eagles list, but certainly showed her wares for East Fremantle in the WAFL Women’s this season.

All four will push for Round 1 spots, with Gee in particular tipped to be in the side. She will be one to watch in Season 7 with her ability to tuck the ball under the arm and then compose herself to hit targets down the field. She can rest forward and hit the scoreboard, or even run off half-back with great effect. Ransom is another who could force her way into the starting team early in the season, with coach Joyce knowing exactly what to expect from his former Tasmania Devils talent. Relinking up in the Sunshine State, Ransom will likely be a long-term midfielder, but having spent so much time forward this season, it would be likely that was an audition for the Suns.

Smith has come on in leaps and bounds this year, moving up to the top flight of state league football in Queensland with Bond University. The balanced midfielder forward played a lot of footy on the wing and half-forward with Queensland to start, then went inside for the actual 2022 AFL Women’s Under 18 Championships, and dominated, winning more clearances than any other player, at an average of six per game. She will more likely start as a pressure forward and work her way into the midfield rotation with a high endurance level. Atkins is a known quantity and has that proven ability at AFLW level, and will provide that extra experience in a young side, and showed the damage she can do inside 50 for the Sharks out in the west this season.

Gold Coast Suns are already an exciting team to watch at AFL Women’s level, with supporters able to have the faith that the Suns are building something special. They have added more running players with skill and versatility to the list, and Gee in particular will be one that immediately impacts early in her career. With two of the top Queensland talents and the top Tasmanian talent, the Suns will head away from the draft quite pleased with what they have been able to achieve.