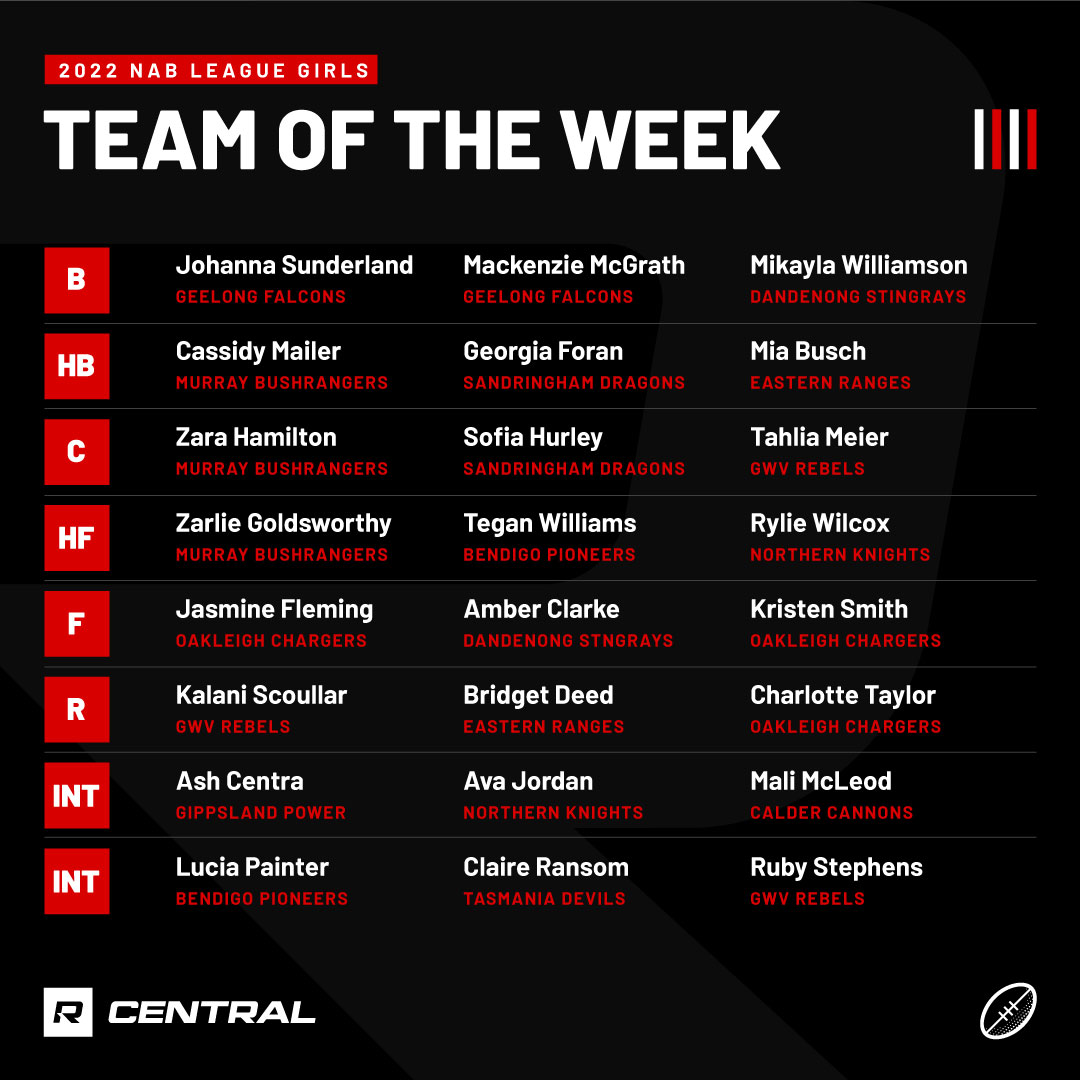 NAB League Girls returned to the field over the weekend, with 12 of the 13 teams beginning their 2022 seasons. As always, Rookie Me Central has compiled its Team of the Week, featuring 24 players – six interchange – who stood out across the round. It is always a difficult task, with the list often well beyond 30 before having to cut some incredibly unlucky players, but in the end, it has to be cut down to two-dozen.

Given the high amount of big wins, it was always going to be tough to spread the players evenly, but three sides have recorded a trio of players. Oakleigh Chargers, GWV Rebels and Murray Bushrangers all recorded an equal league-high three players for the round, with the other three victors – Dandenong Stingrays, Eastern Ranges and Sandringham Dragons – as well as Round 2 losers Bendigo Pioneers and Geelong Falcons contributing two players apiece. Calder Cannons, Gippsland Power and Tasmania Devils had the one representative each.

Round 1’s Team of the Week is captained by our Player of the Week, Murray Bushrangers’ Zarlie Goldsworthy. After 33 disposals, 10 inside 50s and 4.4, she was the standout choice, with Dandenong Stingrays’ Amber Clarke named vice-captain after five goals herself on the weekend. They headliine a dominant forward line, which includes a couple of Oakleigh Chargers.

Kristen Smith – like Goldsworthy – booted four goals on debut against the Knights, with Jasmine Fleming racking up the most touches of any Chargers player on the day, rotating between midfield and forward. Up the opposite end, Rylie Wilcox was outstanding in getting the ball inside 50. Rounding out the starting six is a much needed tall inside 50 in Bendigo Pioneers’ Tegan Williams who took five marks and slotted a lovely goal.

The defence was particularly diffcult to select this week with a number of players deserving of the honour. In the end, a couple of Geelong Falcons hold down the fort deep, with potential father-daughter selection Mackenzie McGrath next to teammate and debutant, Johanna Sunderland. In the other back pocket is Dandenong’s Mikayla Williamson who made life difficult for the Falcons with her run and carry out of defence.

Across the half-back line, Sandringham Dragons defender Georgia Foran was named at centre half-back after 16 disposals and 11 rebounds, keeping the Tasmania Devils at bay. Flanking her either side are a couple of runners in the talented Mia Busch (Eastern Ranges) and Cassidy Mailer (Murray Bushrangers).

ROOKIE ME CENTRAL NAB LEAGUE GIRLS TEAM OF THE WEEK: ROUND 1