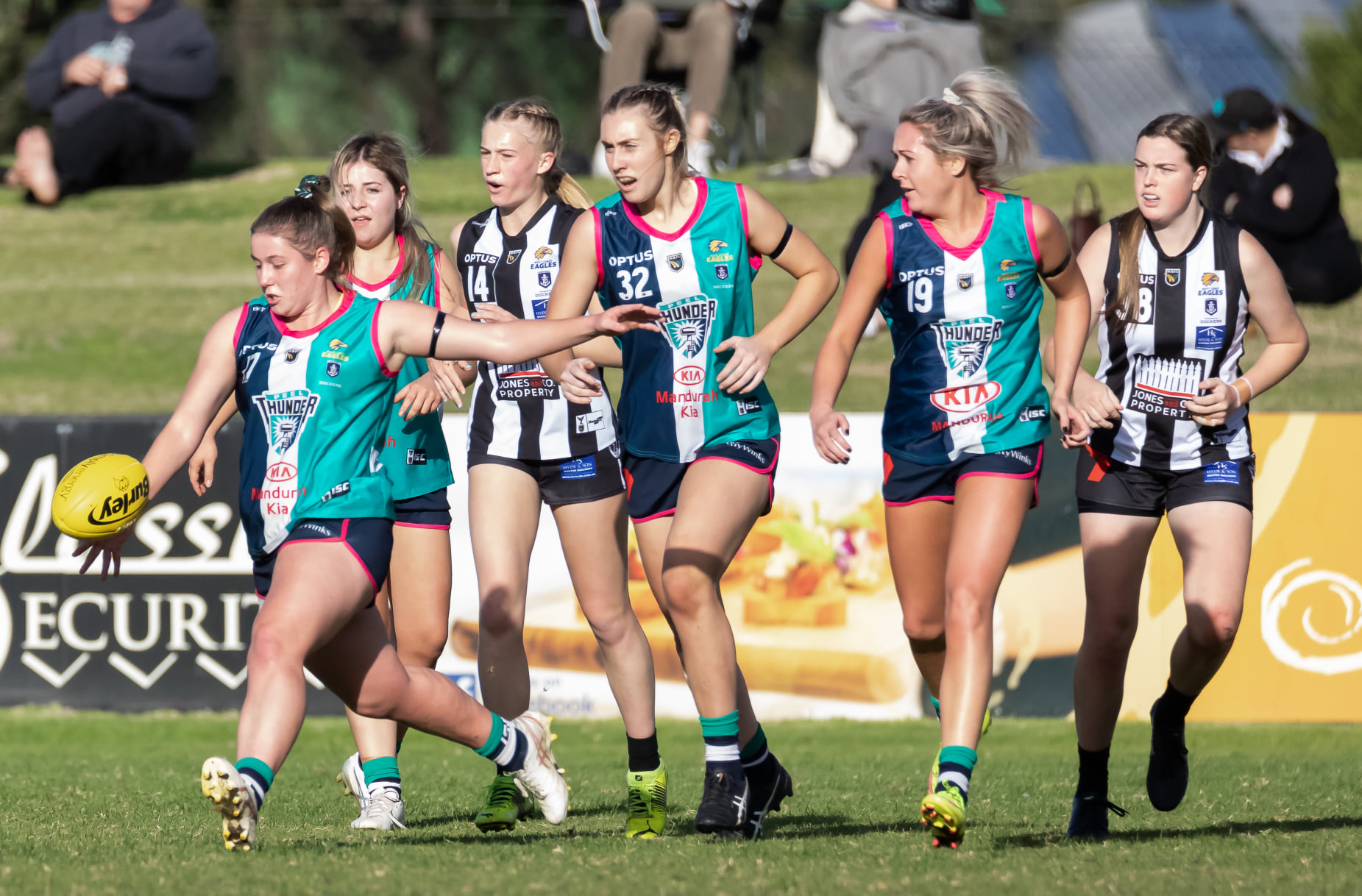 ONLY one team remains undefeated and another winless as the West Australian Football League (WAFL) Women’s enters Round 5 of action. The most anticipated match of Round 5 is the 2021 WAFL Women’s Grand Final rematch between Peel Thunder and Swan Districts, whilst the South Fremantle will search for its second win against the juggernaut that is Claremont, whilst winless West Perth takes on the undefeated East Fremantle.

South Fremantle come into the clash against a red-hot Claremont off a bye, whilst the Tigers made light work of the Falcons on the road. Kicking their highest score in club history, the Tigers can also welcome back some experience to the side. Mhicca Carter and Madeleine Scanlon as well as youngster Mackenzie Webb, but they have lost captain Ella Smith to injury, as well as Tess Blackburn and Jacinta Valentini. The Bulldogs have named an extended bench with the likes of Liusaidh Gilchrist and ruck Kristen Rudler coming straight into the midfield, whilst another Wakfer – Zoe – has been named in defence, and Molly O’Hehir is in attack.

Claremont even without Smith have a strong and experienced midfield, with Sarah Viney bringing her own football last week, and Sasha Goranova and Emily Elkington showing their toughness. Katherine Orme and Mikayla Western provide the outside run, whilst the dominant forward trio of Eva Campo, Brooke Whyte and Tessa Doumanis will stretch the Bulldogs defence. South Fremantle will welcome the return of young talent Rosie Anderson, whilst Gilchrist was impressive last season for the Bulldogs. The young centre line of Aaliyah Ugle, Noa McNaughton and Tanika Bradley will be one to watch for years to come, with Lauren Wakfer in attack, but still no Ashleigh Reidy.

Claremont should have too much depth for the Bulldogs in this clash, but expect it to be a tight one for the most part with the Bulldogs much improved on past years.

In a battle of the two sides with counter-contrasting trajectories, the 3-0 East Fremantle takes on the 0-3 West Perth. Though the Falcons managed to kick their first goal in Round 3, they were outclassed by Claremont in Round 4, and sit on the bottom with a percentage of 3.6. Though undefeated, the Sharks are second behind Claremont’s behemoth percentage, though things are going swimmingly at Shark Park. The second placed side will be without Under 16s talents Zippy Fish and Taya Chambers, with East Fremantle recalling six players to add to an extended bench, with the likes of Abbey Amaranti named straight on a wing, and Alli Nokes the potential replacement for Chambers. West Perth have kept it simple with two changes, as Teal Bennett and Kaitlyn Roper are replaced by Keely Byrne and Isobel Boyce.

East Fremantle looks like a genuine title contender, and having overcome the likes of Peel Thunder and Claremont in recent weeks, has not put a foot wrong. This should be a far easier assignment given the relative age and experience gaps between the sides, though in fairness to West Perth, the Falcons do push to the line regardless of the scores. The defensive setup of Liliana Grassenis, Kayla Stagg, Jessica Roper and Jaymee Duke stands up under immense pressure, whilst Kayla Van Den Heever through the middle, and ruck Cameron Dawson have also impressed this season. The Sharks have a star-studded midfield with Ashleigh Gomes and Sharon Wong, as well as Amber Kinnane and Beth Beckett rotating through. Up forward, the youth of Georgie Cleaver, Mylee Leitch, Anjelique Raison and Julia Teakle has worked really fluently, leading to some big scores.

There is only one feasible way this goes given the respective formlines, but it will be a great test for West Perth to try and firstly score, but secondly avoid a blow out. For East Fremantle, it will be about percentage considering fellow contenders Swan Districts and Claremont have both benefited from it.

The match of the round is the final game of the weekend, as the two best sides from last year go head-to-head at Steel Blue Oval. It might be debated if they are on the same level in 2022, having won four games and lost three between them, but they are still inside the top four and it would be a shock for either side to miss finals. Travelling to Swan Districts’ stomping ground is never easy, but the Thunder’s trip will be compounded by the loss of Jaide Britton (injury), as well as fellow teenagers Jorja Haines and Gracie Fenton. The midfield rotations will be very different this game considering their outs, with State Academy member Megan Bain, as well as Whitney Benson, Dakota Sexton and Jordain Thompson all among the potential inclusions on an extended bench. Tara Stribley is out of the Swans’ side with Mel Hardy among four potential inclusions to replace the top-age State Academy member.

Both sides have lost quality players, and the Swans looked shaky in the opening two weeks, whereas Peel was just outplayed last round. The losses for the Thunder are pretty crucial in this one, with Ebony Bilcich joining Chloe Wrigley and Bella Mann onball, whilst young gun Kaitlyn Srhoj and the talented Aisha Wright. The defensive combination of Emily McGuire and Jaime Henry trying to shut down Kate Bartlett and Kira Phillips. Up the other end, the experienced Peel defence that features Cassie Davidson, Ebony Dowson and Tanisha Anderson will try to shut down the likes of Ashley Sharp, Taylah Edwards and Abbygail Bushby who have all been performing strongly.

It is a tough game to pick, but leaning towards the home side given the outs of the Thunder and the Swans’ recent form.