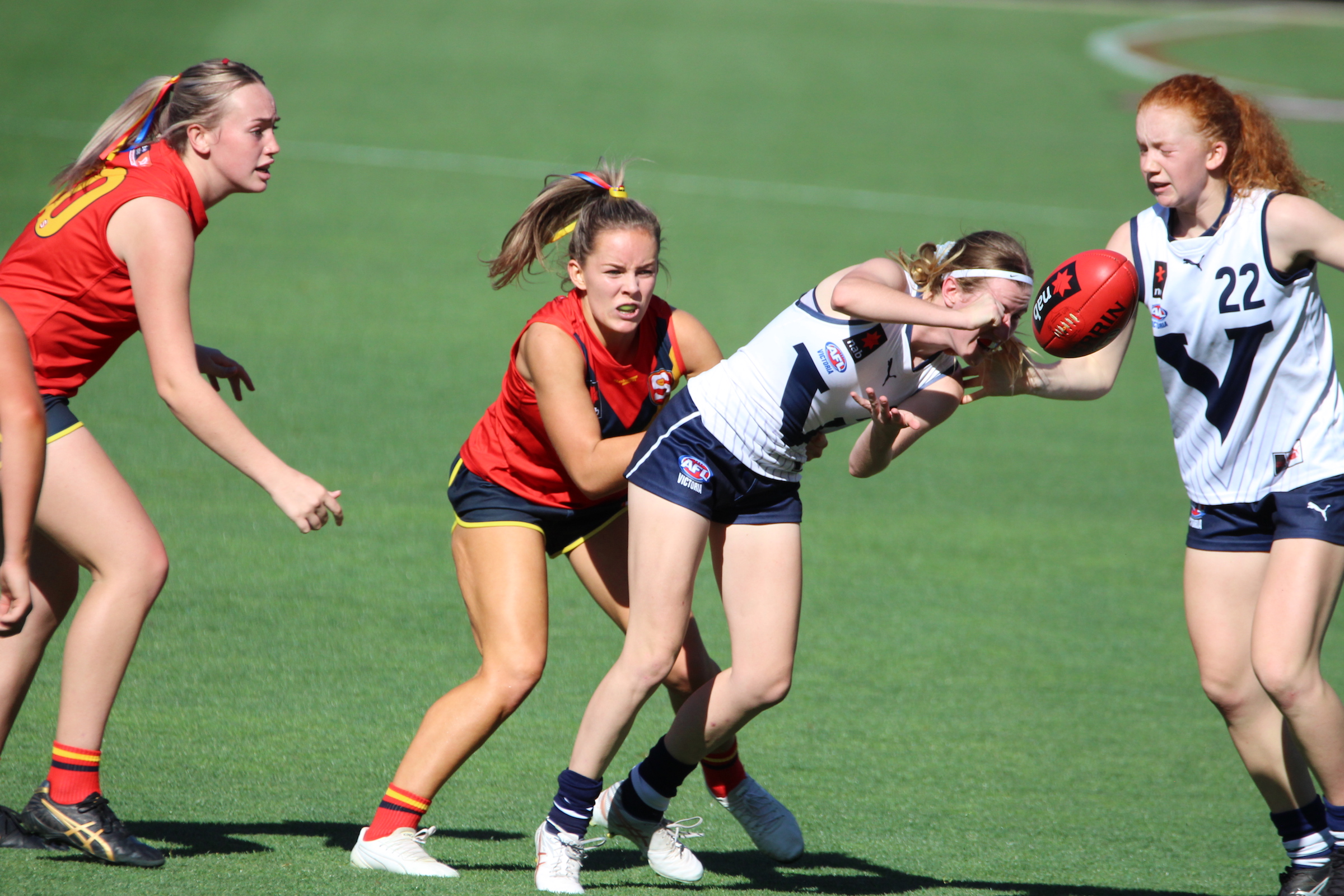 SOUTH Australia claimed a resounding 92-point win over Vic Country on Saturday, continuing their ominous form in the 2022 AFLW Under 18 National Championships. With plenty of stars of the present and future afield, there were plenty of outstanding individual performances to highlight in the latest edition of Scouting Notes.

It’s hard to believe McKee has two more years until she is draft eligible, after she provided another prime example of why under-agers are more than capable of playing Under 18 representative football. The Central District pocket rocket was sensational up forward, proving elusive and creative as ever. She got on the board in a passage from the very first centre bounce with a behind, before coming to life in term two with two goals. McKee’s clean hands were a feature as she hit up to half-forward, before turning towards goal and making many an opponent look silly with her steps and spins out of trouble. Her two majors were highlight-reel moments, and she added a third off the deck in the fourth quarter. Star in the making.

Spending more time up forward than she has done with Norwood, Schwerdt got busy from the outset and was also handy fold through midfield. She had little trouble finding the ball and distributed 13 of her 19 disposals by hand, but also did damage when opting to go by foot. Finishing with 1.1 for the day, Schwerdt hit the scoreboard in term two after clunking a nice overhead mark, but missed her second set shot attempt in the fourth quarter.

Another Norwood midfielder who has spent more time up forward with the state squad, Syme ended up with a game-high 27 disposals and five marks for the victorious Croweaters. She made a positive start, hitting up McKee out of the opening centre bounce break to assist the first score of the match. Otherwise, she went about her business racking up the ball with relative ease to be one of South Australia’s more consistent and reliable figures overall.

Goodwin has been a revelation for Glenelg this season thanks to her ability to break the lines with outside run, and that factor was no different in her latest representative outing. The top-ager was eye-catching as ever in transition, setting off and backing her pace to carry South Australia forward with intent. She racked up 24 touches, four marks, and four rebound 50s, maintaining her kick-first approach on the end of those speedy forward forays. With her best traits combined, she is consistently one of the more damaging players afield.

The bottom-aged AFLW Academy prospect lived up to her family name, producing a very good performance on Saturday. She snared the first goal of the game with a fluent set shot from a tough spot, which set a strong tone for the day. Goody ended up with three majors, booting another set shot in the second term and sharking the tap off a forward 50 stoppage in the next period to slot her third. She also rotated through midfield and looked as polished as anyone afield, with her efforts now setting her up nicely for a strong top-age campaign in 2023.

Another under-age gun who is not draft eligible for another couple of years, Rasheed played her forward role beautifully. She took some time to build into the contest, but got her game going with a trademark goal around the corner in the second quarter. The Sturt young gun added another goal in the following term having earned a holding the ball free kick, and made it four in the final period with two more majors. Her ability to hit up on the lead at half-forward, turn and hit a target on her favoured left-foot was on full show, and one of the features of South Australia’s attacking play after half time.

It’s hard to keep a good player down, and Ewings worked her way into the contest through sheer force. The North Adelaide talent found little room to move in the first half, but still managed to get her hands on the contested ball before helping break the game open in term three. She spent much more time forward of centre after half time, utilising her strength and smarts to snare two goals – one each in the third and fourth quarters. Her first was all class, dribbling the ball home after pouncing on a defensive 50 error from Vic Country. Ewings’ competitiveness and penetrative kicking were other assets on full show, and became more prominent as the game opened up.

The going was tough for most Vic Country players on Saturday, but Skepper was one who produced nice moments while the contest was still tight. She swept back from the wing and provided her usual drive on the outer, again utilising her kick-first approach. The top-ager’s best moments came in the first half, with a nice mark off the kick-out in term one, and a slick step through traffic in the second term before delivering to centre half-forward.

Fresh off NAB League Girls best and fairest honours, Clarke was one of the best performers in the first quarter. She set a strong tone for Vic Country from midfield, with one of her best efforts a tackle to bring down South Australian bull Hannah Ewings. In possession, Clarke generated an enormous amount of forward momentum with her breakaway speed, before shifting forward and having fewer looks as the game wore on. In the third term, she notched two behinds – Country’s only scores for the quarter – and continued to look dangerous at ground level despite the lack of opportunity.

There is just something that clicks for Scott when donning Vic Country colours, and she looked on track to produce another special representative performance in the early stages. With her power and aggression, the GWV Rebels talent was one of her side’s more potent players forward of centre and worked hard to make things happen when in possession. While they did not always come off, Scott snared a set shot goal in the second term and set one up for Tegan Williams in the first with a terrific running passage. When she’s up for it, there’s hardly a better player to watch. Scott finished with 11 touches, three clearances, and three inside 50s to go with her goal.

A solid performer at every level she plays, Simpson ended up as Vic Country’s most prolific midfielder with 16 disposals. As is to be expected from the inside ball winner, 10 of her touches were distributed by hand as she got stuck in and shovelled the ball out to willing receivers on the outside. The Geelong Falcons top-ager ended up with five clearances and along with Eardley, was one of her side’s more reliable performers on the day in a relatively unheralded role.

Far and away Vic Country’s best player across four quarters, Eardley had her hands full throughout the contest. Stationed in her usual key defensive post, the Dandenong Stingrays prospect took on the kick-in duties and looked to generate any sort of momentum out of the defensive arc with eight rebound 50s. All 17 of her disposals were kicks, and she tried desperately hard to cover plenty of ground on the last line. A mobile tall, Eardley also stood out with her intercept marking and was really one of the few Country players who stepped up to the mark for the full game.

Vic Country’s attacking centrepiece, Williams took full advantage of some neat delivery inside attacking 50 to boot two first-quarter goals. The versatile Bendigo Pioneers tall converted both from set shots, looking comfortable around the big sticks and giving her side a fighting chance in the first half with scoreboard pressure. Opportunities were extremely limited after half time, but Williams showed great signs before then to clunk five marks as a solid bookend for her side.