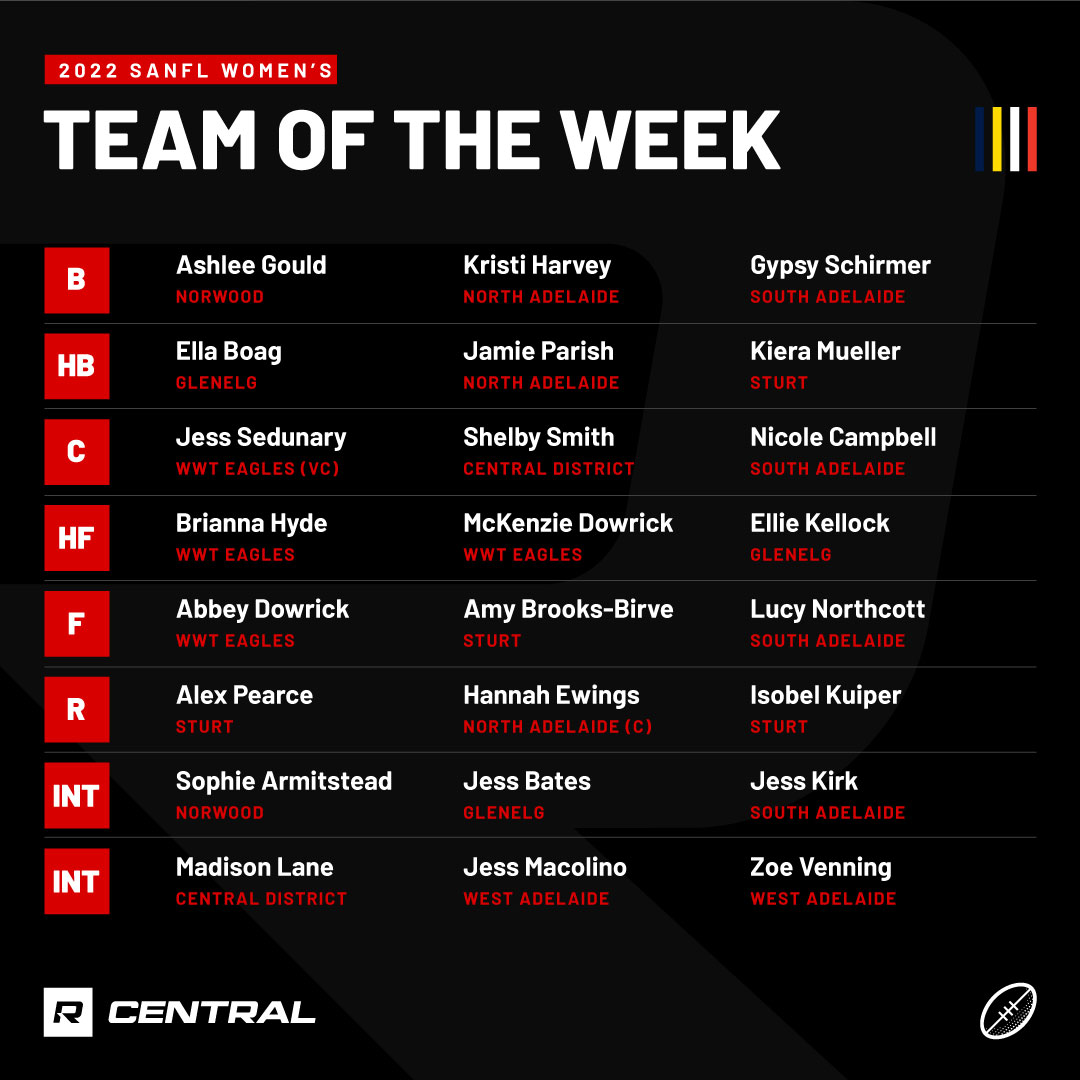 IN an even spread across all eight South Australian National Football League (SANFL) Women’s teams, every side has earned multiple players in our Rookie Me Central Team of the Week for Round 12. Highlighted by winners Sturt, Woodville-West Torrens and South Adelaide (all four), the team also featured three players each from Glenelg and North Adelaide who engaged in a ripping contest. Meanwhile Round 12 losers, Norwood, West Adelaide and Central District all had two apiece.

Our two leaders completing the final round of action for the hypothetical Team of the Week are a young gun and and AFLW-experienced talent who are both incredibly versatile. The standout player for Round 12 was top AFLW Draft prospect Hannah Ewings who earns the captaincy, following her league-high 34 disposals, as well as three marks, five tackles, eight clearances, five inside 50s and four rebound 50s. Her vice-captain is the ever-consistent Jessica Sedunary who was instrumental in the Eagles’ win over West Adelaide, picking up 29 disposals, eight clearances, five tackles, three inside 50s and four rebound 50s, covering the ground with ease.

The back six has a couple of fresh faces in it this week, with Glenelg State Academy member Ella Boag and ex-Eagle now Rooster Jamie Parish named across half-back. Boag had a brilliant game of 18 disposals, two marks, five tackles, two inside 50s and five rebound 50s in the absence of teammate Sarah Goodwin, while Parish amassed 14 disposals, four marks, two tackles and four rebound 50s and was among the best in the same game. Also back there from that match is reliable full-back and Roosters co-captain Kristi Harvey who had a big game of 17 disposals, four marks, six tackles and five rebound 50s.

Sturt’s Kiera Mueller was in the Team of the Week again, named off half-back following 19-disposal, two-mark, four-inside 50 and three rebound-50 game against Central District. Rounding out the back six were Norwood’s Ashlee Gould and South Adelaide’s Gypsy Schirmer. Gould picked up 20 disposals, three marks, four tackles and nine rebound 50s, whilst Schirmer had a day out with 22 disposals, two marks – one contested – six tackles, two inside 50s and three rebound 50s.

A star-studded midfield that featured a lot of inside bulls this week saw it hard to find spots for everyone. Alongside Ewings and Sedunary, there was Central District skipper Shelby Smith once again. She had 23 disposals, seven clearances and four rebound 50s, whilst laying a whopping 18 tackles in the loss to Sturt. Her opposition, Isobel Kuiper was outstanding before coming off late with injury, managing 19 disposals, two marks – one contested – seven tackles, 10 clearances, two inside 50s and 1.0. South Adelaide’s Nicole Campbell (17 disposals, six marks, six tackles and four inside 50s) was busy around the ground, whilst Sturt ruck Alex Pearce was impressive against quality opposition, picking up 14 disposals, three tackles, 21 hitouts and four clearances.

There is a distinct Eagles feel to the front six, with a trio of West Australians all marking their mark in the SANFL Women’s. Sisters, McKenzie Dowrick and Abbey Dowrick had a combined 27 disposals and booted four goals between them, whilst Abbey also laid five tackles and had five inside 50s, and McKenzie took a contested mark and recorded two clearances. Teammate Brianna Hyde earned another Team of the Week spot following 21 disposals, four marks, four tackles and four inside 50s.

The other three inside 50 are from three different clubs, with Glenelg captain Ellie Kellock squeezed out to a flank following another strong game and deserving of a starting spot despite so many quality onballers. Kellock picked up 22 disposals, four marks – one contested – five tackles, five clearances, five inside 50s, two rebound 50s and kicked a goal in the win over North Adelaide. Full-forwards Amy Brooks-Birve and Lucy Northcott are the other two starters in the side. Brooks-Birve booted 2.1 from seven disposals and four contested marks, whilst Northcott managed 15 disposals, two marks – one contested – four tackles and slotted 2.3.

The six-player interchange features both of losing side West Adelaide’s representatives, with midfielders Jess Macolino and Zoe Venning making it in. Macolino picked up 30 disposals and nine clearances, and laid 10 tackles in the loss to the Eagles, whilst Venning recorded the 27 disposals, six marks – one contested – eight tackles, five clearances and five inside 50s. Another tough midfielder in Jessica Bates continued her impressive season with 25 disposals, two marks, 13 tackles, eight clearances and two inside 50s.

Norwood’s Sophie Armitstead had another four-quarter performance on her way to 22 disposals, two contested marks, three tackles and eight clearances, while South Adelaide’s Jess Kirk and Central District’s Madison Lane round out the squad of 24. Kirk played up the ground along a win to managed 18 disposals, five marks – two contested – six tackles and four inside 50s – whilst Lane picked up 16 disposals, five marks, five tackles, two inside 50s and eight rebound 50s out of defence.

The three emergencies were all very unlucky not to make it in, with West Adelaide young gun Lucy Boyd having 18 disposals and 10 rebound 50s in defeat, whilst Norwood ruck Leah Cutting (15 disposals, three marks, five tackles, 36 hitouts and four inside 50s) was impressive through the ruck, but not as dominant as she could be credit to the opposition duo. North Adelaide’s Jaimi Tabb was another standout for the Roosters with 20 disposals, five marks – one contested – nine tackles, four clearances and two inside 50s.

There was an even balance across the board of players who were unlucky to miss out and were on the shortlist initially. Sturt duo Alisha Gepp and Georgia Bevan were a couple of standouts to come close, with one representative from each other club also just missing out. They were Central District’s Caitlen Teague, Glenelg’s Matilda Scholz, North Adelaide’s Amelie Borg, Norwood’s Lana Schwerdt, South Adelaide’s Jess Waterhouse, West Adelaide’s Saraid Kustermann and Woodville-West Torrens skipper Annie Falkenberg.