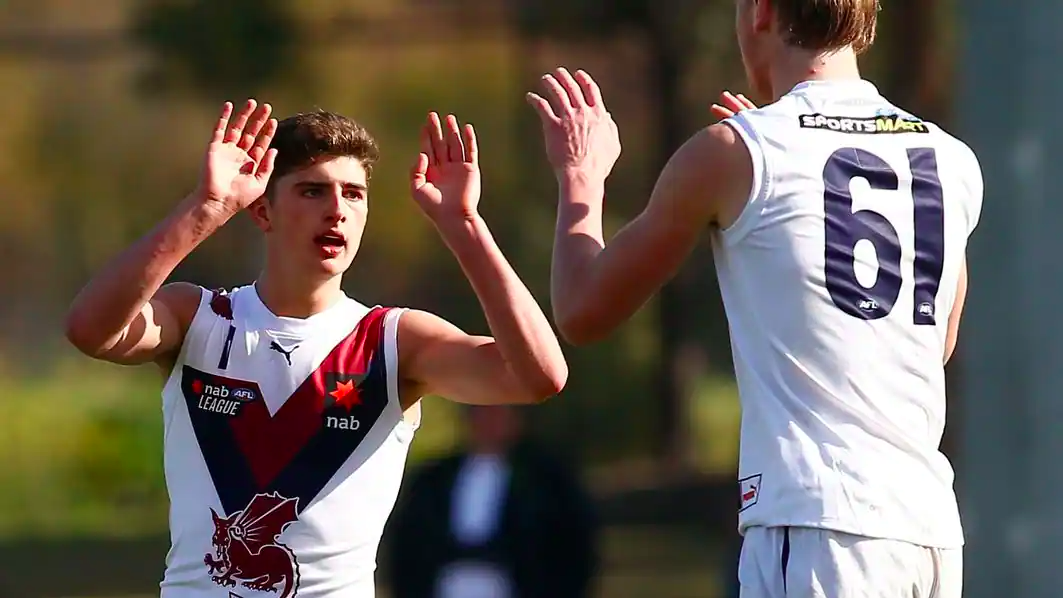 AFTER a month-long recess, the NAB League returns to full-time proceedings this weekend, while a bunch of AFL Academy guns make their way back to clubland around the nation. It all kicks off under Friday night lights, as Sandringham welcomes skipper Will Ashcroft and gun forward Harry Sheezel to the side, which boasts seven debutants – building on nine from last week.

Looking to redeem their Round 7 loss to Eastern, the Dragons will also have access to players from Melbourne Grammar given the school has a bye in the APS competition this week. It means another AFL Academy member, bottom-ager Ryley Sanders slots into midfield, and MGS captain Ethan Smith gets his chance starting at half-forward.

In potentially their final outings before being selected in the mid-season draft, Sandringham’s Max Ramsden and Hugo Hall-Kahan will also get extended opportunities to impress in different roles. Ramsden has again been named at full forward, while the versatile Hall-Kahan features among Sandy’s starting centre bounce mix.

Though without its own APS jets and Jai Culley, Dandenong will also call upon an AFL Academy member in Henry Hustwaite, who looks set for more time in midfield alongside Taj Campbell-Farrell. Vic Country representatives Nicholas Collier and Taj Campbell-Farrell have also been named, as both sides look to build on their 3-2 records.

Elsewhere in the NAB League this weekend, Aaron Cadman slots back into his centre half-forward post as Greater Western Victoria takes on the Western Jets, who benefit from the MGS bye with Matthew Payne‘s inclusion. Also on Saturday, Tasmania Devils captain Lachlan Cowan returns to take on the Eastern Ranges, while national academy standouts Jhye Clark (Geelong) and Luke Teal (Oakleigh) see their sides do battle in Mars Stadium’s double-header.

There are also two games set for Sunday, as the ladder-leading Gippsland Power battle the Murray Bushrangers for a second time this season, while the bottom-placed Bendigo Pioneers host Calder in Swan Hill with the goal of getting points to show for their efforts.

In the state leagues, there are some top and over-age prospects who continue to climb the grades. Still in Victoria, Lachlan Carrigan has earned a maiden call-up to Richmond’s VFL side, where fellow mid-season hopeful Massimo D’Ambrosio impressed last week. In opposition, Sydney Swans Academy product Jordan Endemann will be another to make his VFL debut.

In South Australia, West Adelaide midfielder Kobe Ryan (knee) will miss League proceedings, as will Tom Scully in the Under 18s, but Harry Lemmey will look to produce a breakout performance when he turns out for the Bloods’ reserves against South Adelaide.

Adelaide Crows father-son candidate Max Michaelanney is set to slot straight back into Norwood’s reserves as the Redlegs take on North Adelaide this evening, with many of South Australia’s state squad members continuing to ply their trade among their peers.

Over in Western Australia, teams are preparing for a super Saturday of action, with all five fixtures taking place on the one day. There is a possibility that two Under 18 state squad members go head-to-head at League level, with Elijah Hewett‘s Swan Districts set to clash with Steely Green‘s South Fremantle. Both have been the only juniors to consistently play in WA’s top flight this season, but opportunity awaits for someone like Jedd Busslinger after his hot start to the season.