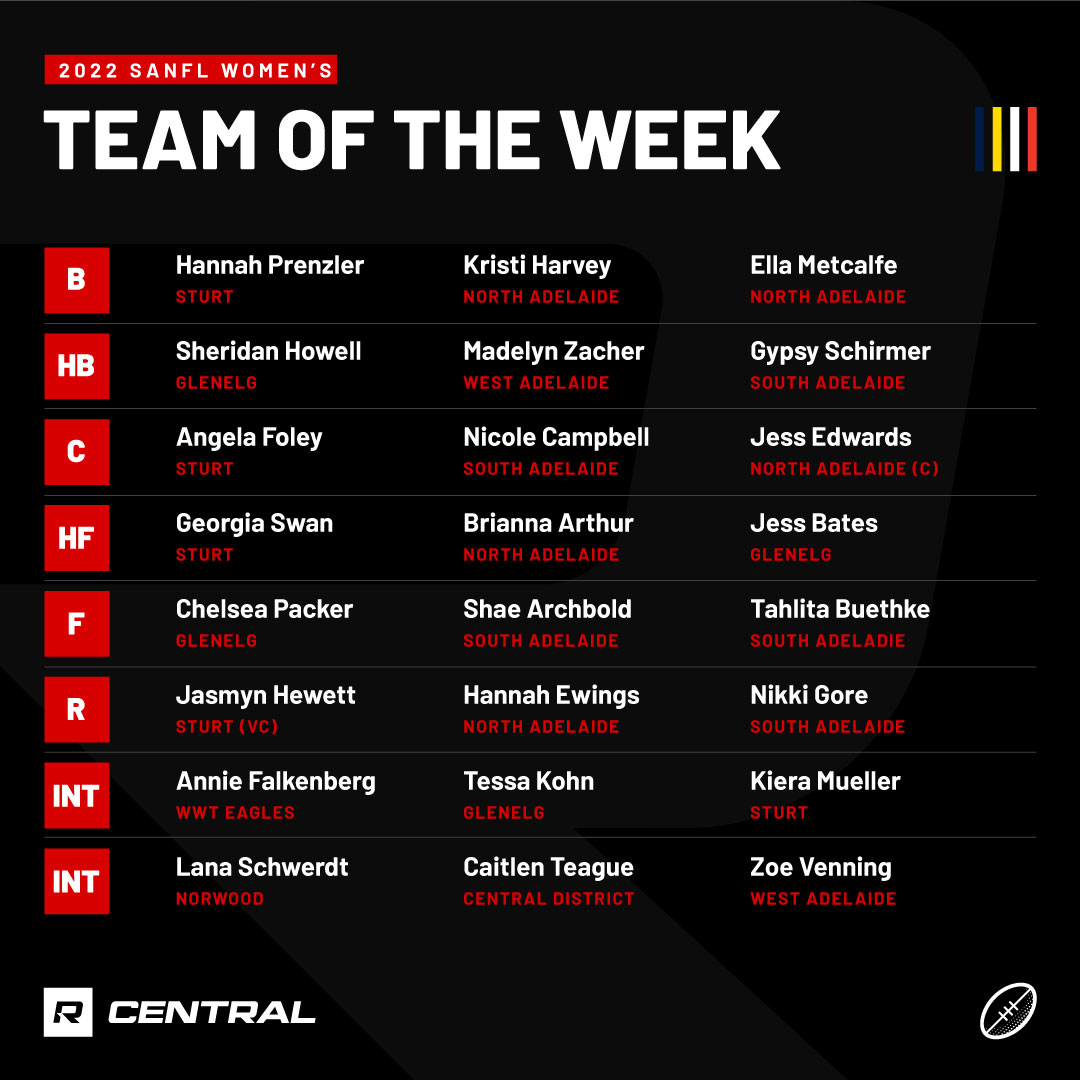 IT was a one-sided round of South Australian National Football League (SANFL) Women’s action on the weekend, and the four winners contributed 19 of the 24 players in our Round 5 Team of the Week. Sturt, North Adelaide and South Adelaide all contributed five players, with Glenelg only one behind with four. Of the losers, West Adelaide had the two, with the three remaining sides – Central District, Norwood and Woodville-West Torrens having the sole representative after 50-point defeats.

This week’s captain and vice-captain have plenty of experience between them, both past and present AFLW talents. Leading the hypothetical 24-player squad out for Round 5 is North Adelaide’s Jessica Edwards, with the former Carlton AFLW player having a standout game pushing higher up the field than normal, and picking up 25 disposals, two marks, seven clearances, four inside 50s and three rebounds in a really complete performance. Her vice-captain for this week is Ellen Maple Medallist, and Sturt ruck Jasmyn Hewett who continued to knock on the door of Adelaide Crows selection.

At half-back, Madelyn Zacher did a lot of great work early for the Bloods to try and keep them in the contest against South Adelaide, finishing with 16 disposals, three tackles and two rebound 50s. Flanking her either side are Glenelg’s Sheridan Howell and South Adelaide’s Gypsy Schirmer. Howell was lively in the defensive 50 for the Bays, amassing 13 disposals, four marks, two tackles and five rebound 50s, whilst Schirmer had 18 disposals, five marks, three tackles, three inside 50s and four rebound 50s.

Once again, it was incredibly difficult to slot in just the five midfielders for this week’s team, with captain Edwards on the wing, and vice-captain Hewett rucking. On the other wing was Sturt’s Angela Foley who emerged with the second most touches of the round behind Edwards with 24, as well as four marks – one contested – six tackles, three clearances and six inside 50s. On-ball are a couple of Panthers in Nicole Campbell and Nikki Gore after some terrific efforts both offensively and defensively. Campbell amassed 20 disposals, four marks, six tackles, three clearances, three inside 50s and three rebound 50s, whilst Gore laid another 13 tackles to go with 27 disposals, two marks – one contested – four clearances and three inside 50s. Rounding out the midfield is North Adelaide dynamo Hannah Ewings who amassed another 20 disposals, five marks three tackles, five clearances and two goals in the win over Eagles.

It is no surprise to see the front six packed with high-scoring talents from the winning sides. South Adelaide duo Shae Archbold (four goals from 10 disposals, three marks – two contested – and seven tackles) and Tahlita Buethke (three goals from 17 disposals, three marks – one contested – and nine tackles) both hit the scoreboard numerous times and laid some fierce tackles inside 50. Also joining them was North Adelaide talent Brianna Arthur to hold down centre half-forward after her 16-disposal, five-mark – one contested – two-clearance, five-inside 50 and two-goal game.

Glenelg also has a couple of players in the forwardline, with ball-winner Jessica Bates having another outstanding game following 22 disposals, three marks – one contested – 10 tackles, four clearances, five inside 50s, two rebound 50s and one goal. Joining her in the starting side is teammate Chelsea Packer (14 disposals, four inside 50s and two goals), whilst Sturt’s Georgia Swan slotted onto the half-forward flank following her season-high of 21 disposals, as well as two marks – one contested – and eight inside 50s.

There were up to 22 players on top of the 24 eventually selected, on the shortlist. It showed the evenness of the competition for the round, with all teams having additional possibilities. From Central District, Shannon Murphy and Laitiah Huynh were both considered, with West Adelaide having captain Madison Russell and young star Keeley Kustermann among other names in line for selection. Norwood’s Morgan Johnston was picked as an emergency, with captain Alison Ferrall and midfielder Sachi Syme also considered. For Woodville-West Torrens, forward Jordann Hickey was named as another emergency.

The third and final emergency was Sturt’s Georgia Bevan, with teammates such as Alisha Gepp, Ellie Lynch, Alysha Healy and Ally Ladas also considered for spots in the team. South Adelaide had a number of potential inclusions, with Jess Waterhouse, Nari Wright and Jaslynne Smith among the possibilities, whilst Glenelg’s Piper Window, and North Adelaide’s Katelyn Pope and Megan Ryan also impressed on the weekend.