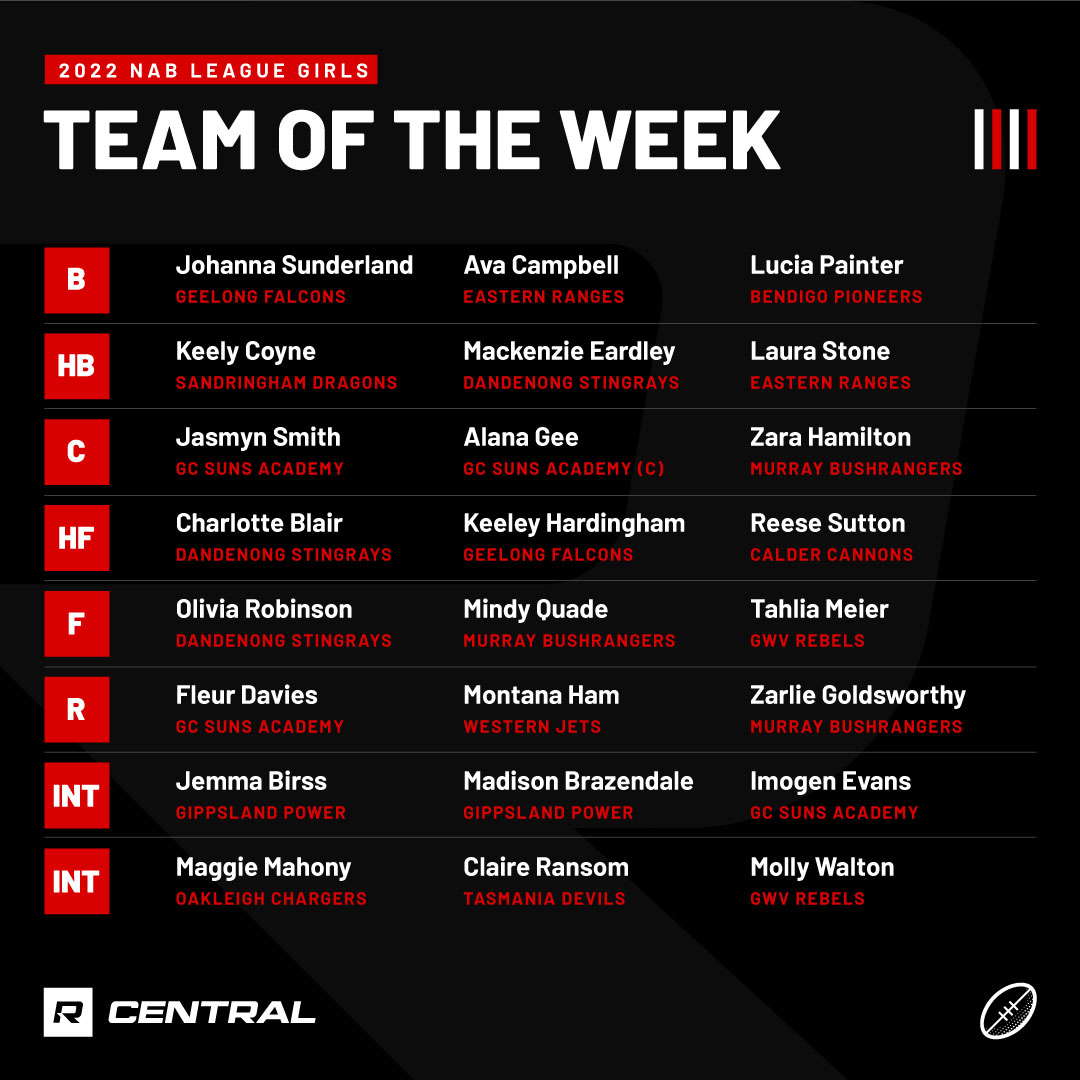 THE GOLD Coast Suns Academy dominates our NAB League Girls Team of the Week for Round 7, contributing a round-high four representatives to the 24-player squad. Fellow winners, the Murray Bushrangers and Dandenong Stingrays had three players apiece make the cut, while every other mainstay region had at least one representative. Check out the full squad, including three emergencies, below.

At the heart of the side this week with the figurative captain’s armband is Gold Coast Suns Academy standout Alana Gee. The AFLW Academy member was terrific in her side’s win over reigning NAB League premier, Oakleigh Chargers, collecting a round-high 34 disposals and seven inside 50s. Her blend of athletic traits and natural footballing nous was on show, as the Suns’ one-game stint down south proved a fruitful one.

The Eastern Ranges make up a third of this week’s defence, with a player slotting in on each line. After impressing once more, bottom-ager Laura Stone assumes her spot at half-back, joining top-age teammate Ava Campbell who comes in at full back.

AFLW Academy member Mackenzie Eardley continued her ‘Return of the Mac’ tour, making consecutive team of the week appearances in her first two games back. She was dominant in Dandenong’s latest victory, ensuring the country region remains undefeated and top of its pool.

Filling out the pockets are a couple of under-agers. Geelong’s Johanna Sunderland was again reliable on the rebound, while Bendigo’s Lucia Painter brought her booming kick and hard edge to the backline in a loss to Murray. Sandringham’s Keely Coyne rounds out the six, having been squeezed out of a very high level midfield.

Good luck winning a clearance against this week’s midfield. Gee heads the centre bounce mix alongside teammate Fleur Davies (ruck), with Victorian powerhouses Zarlie Goldsworthy and Montana Ham locks for the side once again. Their size, athletic traits and hardness at the contest make them a truly unbeatable trio. Out on the wings, another Sun – Jasmyn Smith – features, along with a second Bushranger in Zara Hamilton. Both can play on either side of midfield, but found a home on the outside in Round 7.

While this week’s forwardline did not produce as many goals as teams in weeks gone by, there remains handy structure and quality. Keeley Hardingham forced her way into the side having dominated in the ruck, but rested forward enough to justify her placing there. Mindy Quade booted a round-high three goals to slot in at full forward, making for a strong key position combo.

GWV’s Tahlia Meier also ended up with three goals to slot in on a pocket despite working high up the ground, while Dandenong pair Charlotte Blair and Olivia Robinson stood up to earn their spots on one side of our six. Rounding out the line is Calder co-captain Reese Sutton, who was again prominent through the middle but is known to rotate forward.

A couple of truly high quality top-age prospects feature on this week’s bench, with Tasmanian standout Claire Ransom and Suns Academy captain Imogen Evans proving hard to deny. Ransom is joined by teammate Madison Brazendale, while 2006-born talents Maggie Mahony and Jemma Birss were arguably their sides’ best players in losses. After another 29 disposals, Molly Walton was a lock for the second week running.

ROOKIE ME CENTRAL NAB LEAGUE GIRLS TEAM OF THE WEEK: ROUND 7