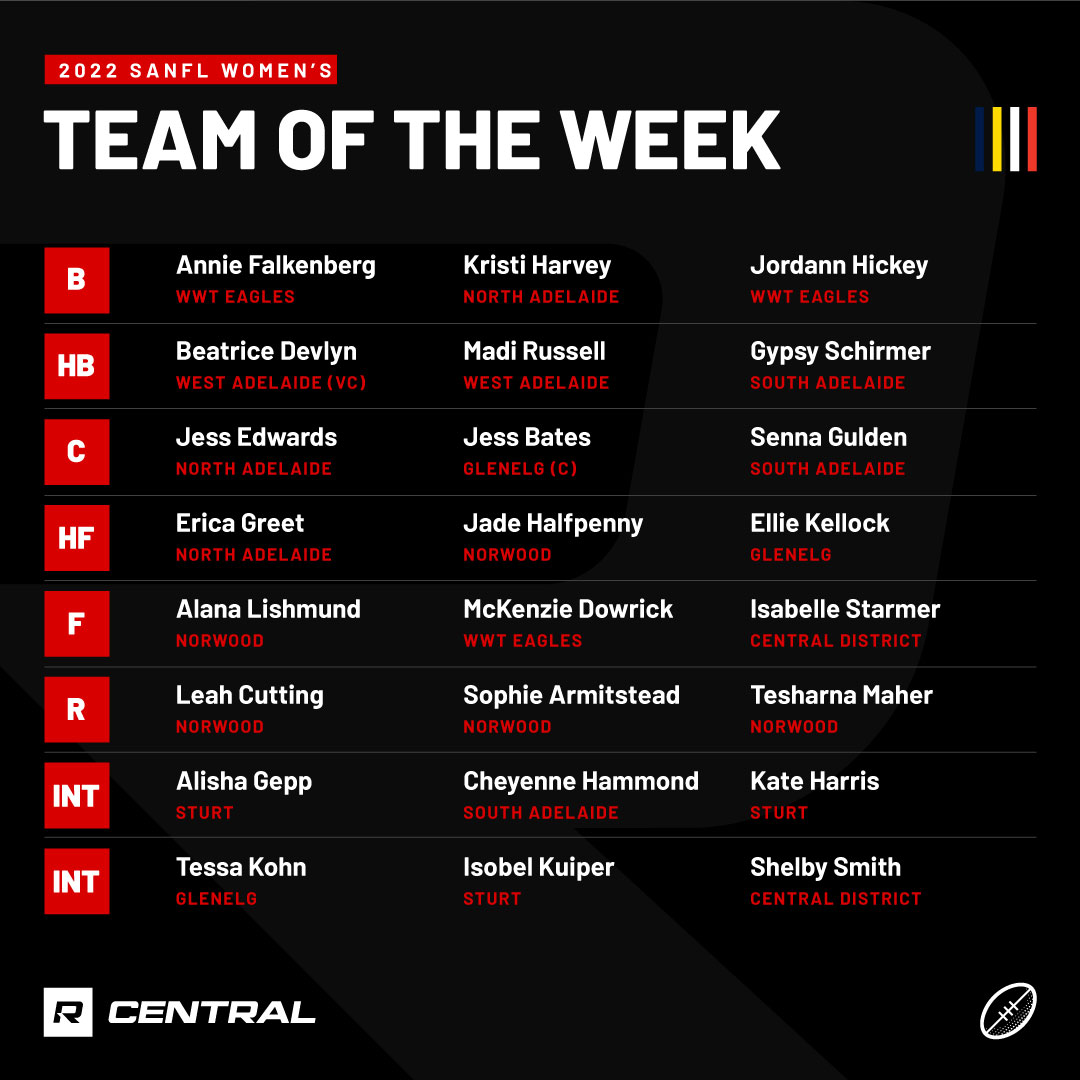 NORWOOD was the clear standout in our Rookie Me Central South Australian National Football League (SANFL) Women’s Team of the Week for Round 10 with five representatives. The Redlegs were the only side to have more than three players make the cut, with each of the seven other teams having between two and three representatives for the weekend.

Glenelg’s Jessica Bates has had a phenomenal season in 2022, and that continued on the weekend picking up 31 disposals, two marks – one contested – 12 tackles, eight clearances, four inside 50s and two rebound 50s to earn the captaincy in our Team of the Week for Round 10. Her deputy this round is West Adelaide defender Beatrice Devlyn who was the only player to eclipse Bates’ disposal tally for the weekend, picking up 32 touches, as well as two marks, four tackles, two clearances and 11 rebound 50s.

Eagles utility Jordann Hickey had another strong defensive performance in Round 10 and picked up 14 touches, two marks, two tackles and five rebound 50s to slot into the back pocket, whilst South Adelaide’s Gypsy Schirmer rounded out the back six with 22 disposals, three marks, 13 tackles, three clearances and four rebound 50s.

Another stacked week of incredible midfield performances, Norwood boasts the entire followers line. Starting with ruck Leah Cutting, the St Kilda AFLW talent recorded a massive 53 hitouts in the win over West Adelaide, whilst finishing with 12 disposals, two marks – one contested, 15 tackles, two clearances and five inside 50s. Cutting roved it down to the likes of Sophie Armitstead and Tesharna Maher who both shone through the middle. Armitstead had 21 disposals, three marks, eight tackles, nine clearances, three inside 50s and four rebound 50s, whilst Maher managed 23 disposals, four marks, seven clearances and nine inside 50s.

Inside 50, Norwood has a couple of representatives in what was a low-scoring round for the competition. Jade Halfpenny and Alana Lishmund both feature in the Team of the Week forwardline, with Halfpenny taking seven marks – two contested – 17 disposals, two tackles and three inside 50s, whilst Lishmund booted 2.3 from 12 disposals, three marks – one contested – and five tackles. Woodville-West Torrens forward McKenzie Dowrick clunked two contested marks from her five, and also had 10 disposals, three tackles and slotted three goals.