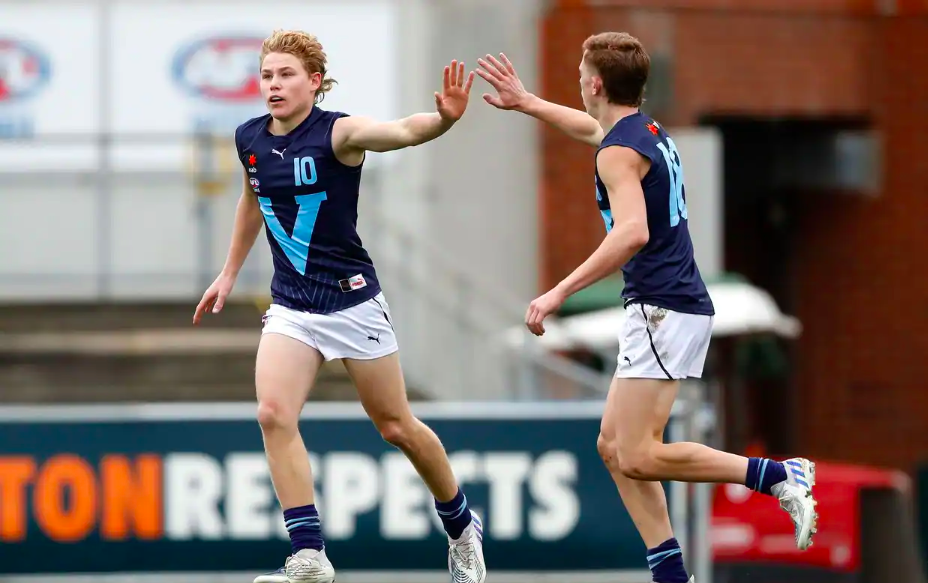 FOR the first time at NAB League level, the Ashcroft brothers – Will and Levi – will take the field together this weekend. While elder brother Will skippers the Sandringham side as a top-ager, Under 16 talent Levi makes his debut as 23rd man, after impressing for Vic Metro in last week’s National Development Championships opener.

The Dragons are set to take on the Western Jets in windy Williamstown on Sunday, looking to improve on their 4-3 start as the second-ranked Metro region, but seventh overall team in the current standings. Their midfield is stacked, with the elder Ashcroft joined by Harry Sheezel and Cameron Mackenzie, while Charlie Clarke is another in hot form who can rotate through the engine room.

All four players are among Vic Metro’s Under 18 squad, which was formally announced today. There will be plenty more representative hopefuls to watch in Round 10 of the NAB League, which kicks off on Saturday morning when the Northern Knights and Eastern Ranges lock horns at Preston City Oval.

A Mars Stadium double-header forms the feature of the weekend’s fixtures. Host, Greater Western Victoria takes on the second-placed Oakleigh Chargers at 11:30am, before the Geelong Falcons and Calder Cannons do battle at 2pm to round out the day’s action.

The Under 18 National Championships also get underway this weekend, as South Australia takes on the Allies at Thebarton Oval on Sunday. Both sides underwent their final trials last week, with SA beating the state’s Under 20 squad, while the Southern Allies edged past their Northern counterparts. Now, they will become teammates.

Rookie Me Central will release a preview for the game later tonight (Friday). Among the prospects to watch, the Croweaters boast a formidable brigade of talls including Harry Lemmey, Harry Barnett, Isaac Keeler, and Tom Scully. Meanwhile, Eagles pair Mattaes Phillipou and Adam D’Aloia will likely wax in midfield.

Staying on the Allies theme, at least in terms of states represented, the Northern Academies are poised to continue the Under 16 National Championships. Both NSW-ACT academies will face off at 12pm on Saturday, before the Queensland-based sides meet at the same time on Sunday.

There will not be any SANFL Under 18s action this weekend with the representative side in action, but the WAFL grades roll on into Round 9. At senior level, the likes of Jedd Busslinger and Reuben Ginbey have been turning out for East Perth, as Steely Green continues to be a mainstay for South Fremantle.