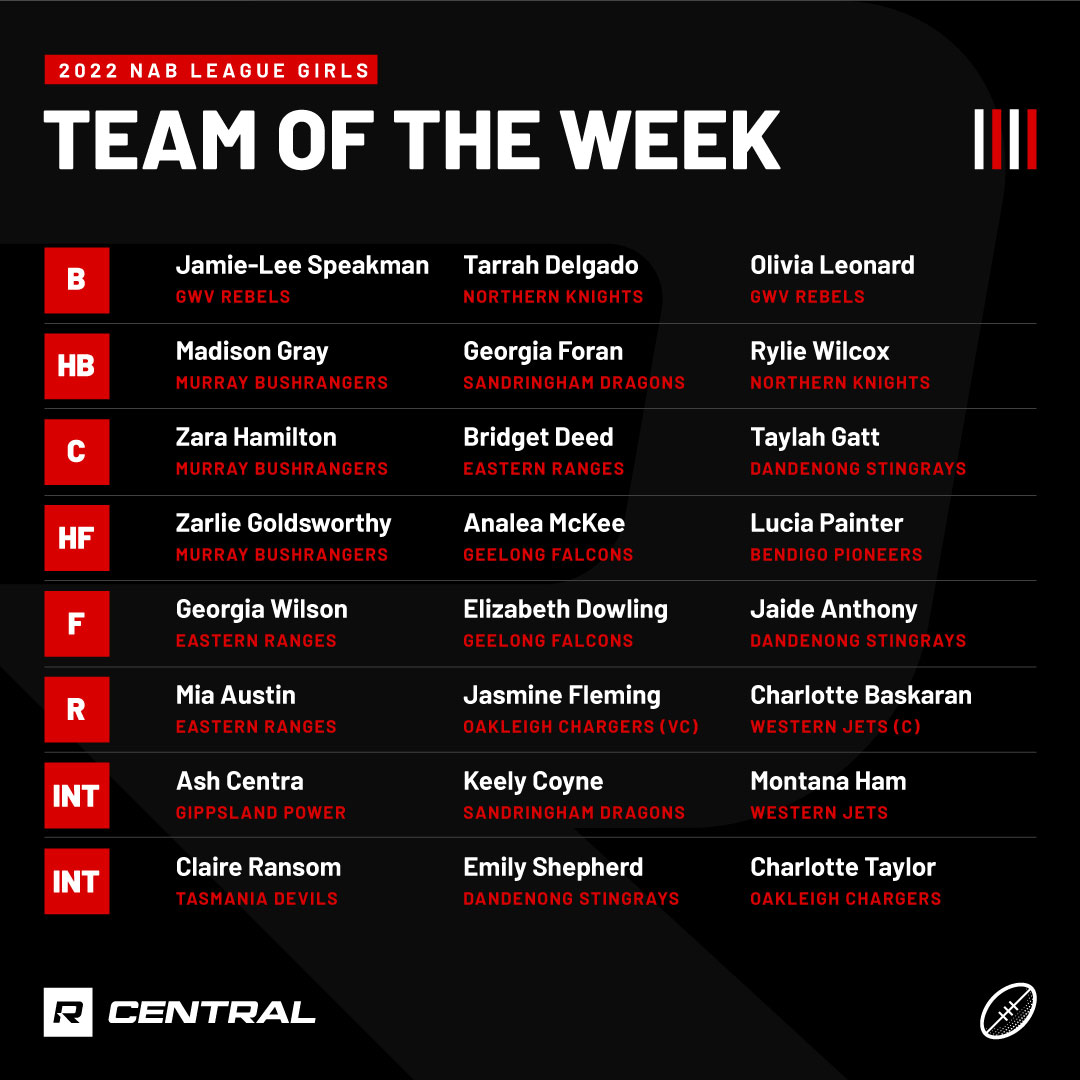 THREE clubs have a trio of players in the Rookie Me Central NAB League Girls Team of the Week for Round 3, in an even competition effort. All 12 clubs that took part in the action had a representative, with Eastern Ranges, Dandenong Stingrays and Murray Bushrangers having an equal league-high of three players apiece. Other winners, Geelong Falcons, Oakleigh Chargers and Western Jets, as well as losers GWV Rebels, Northern Knights and Sandringham Dragons all had multiple players. Bendigo Pioneers, Gippsland Power and Tasmania Devils had the solitary representative in the 24-player squad.

Leading the team out this week is our Player of the Week and AFLW Academy jet, Charlotte Baskaran who is captain of the side. Sharing the on-ball role is Oakleigh Chargers talent and fellow Academy prospect Jasmine Fleming who earns vice-captaincy honours. Both their sides won this week after losses in Round 2, with Baskaran’s Western Jets teammate Montana Ham, and Fleming’s Chargers teammate Charlotte Taylor both on the interchange for the round. The other two spots in the midfield belong to Eastern Ranges duo Mia Austin and Bridget Deed after impressive efforts. Austin had 26 hitouts and booted three goals in the Ranges’ win over Sandringham Dragons, whilst Deed racked up a match-high 27 disposals in another best on ground performance.

Sharing a league record-high of 38 disposals, Murray Bushrangers’ Zara Hamilton brought her own football. She was named in another Team of the Week alongside teammate Zarlie Goldsworthy who made it three from three, whilst Bushrangers’ co-captain Madison Gray also made the team, slotting onto half-back. On the other wing, Dandenong Stingrays’ Taylah Gatt was enormous with her run and carry, culminating in nine inside 50s from her 15 disposals. Gatt is in the side along with two teammates, Jaide Anthony and Emily Shepherd.

GWV Rebels defenders Jamie-Lee Speakman and Olivia Leonard slot into respective back pockets, whilst Northern Knights duo Tarrah Delgado (full-back) and Rylie Wilcox (half-back) make up two of the other spots in the back six. Wilcox played further afield during the Knights’ loss on a wing compared to her usual half-forward role, but her two-way running allowed her to get back and help the defence which is the reasoning behind her spot on the back flank. Rounding out the back six is Sandringham Dragons’ defender Georgia Foran who was named in the team for yet another week, this time alongside Keely Coyne.

Geelong Falcons talls Analea McKee and Elizabeth Dowling combined for nine goals in Round 3 and hold down the key forward spots. They were among a host of multiple goalkickers including Eastern Ranges’ Georgia Wilson and Bendigo Pioneers’ Lucia Painter. Turning the attention to the bench, and sole representatives Ash Centra and Claire Ransom earned their spots in the team yet again. Though unlucky to miss out, Northern Knights’ Ava Jordan, Sandringham Dragons’ Mia Zielinski and Gippsland Power’s Ella Stoddart were named the three emergencies for Round 3.

ROOKIE ME CENTRAL NAB LEAGUE GIRLS TEAM OF THE WEEK: ROUND 3