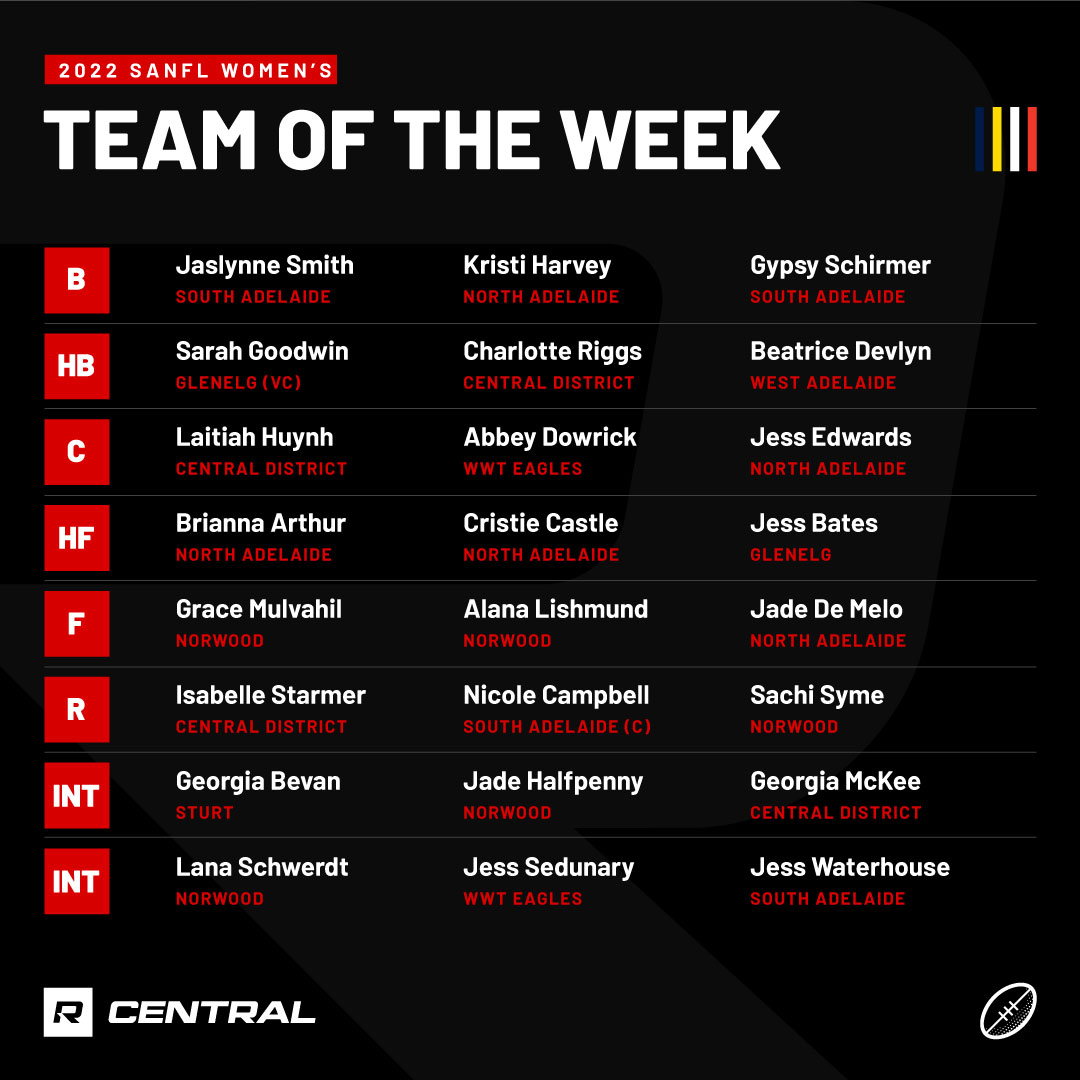 NORTH Adelaide and Norwood both produced big wins to earn five representatives in our South Australian National Football League (SANFL) Women’s Team of the Week for Round 7. The Roosters and Redlegs had one more than other winners, Central District and South Adelaide who managed the four, whilst Glenelg and Woodville-West Torrens Eagles both had multiple representatives. Sturt and West Adelaide managed the sole representative in the 24-player squad.

South Adelaide midfielder and AFLW-experienced ball-winner Nicole Campbell earned the captaincy this week after a whopping 31 disposals, four marks – one contested – 17 tackles, four clearances, six inside 50s, six rebound 50s and a goal, in what was the most complete performance of the weekend. Her hypothetical deputy for this side is top-age Glenelg defender Sarah Goodwin who starred in the Bays’ loss to North Adelaide on the weekend with a massive 32 disposals, 10 marks – three contested – and 12 rebound 50s.

South Adelaide hold down the fort in either back pocket this week, following impressive efforts from both Jaslynne Smith and Gypsy Schirmer. Smith kicked her first goal in her 55-game career, but also amassed 18 disposals, seven marks – one contested – six tackles and four rebound 50s for her troubles. Schirmer had the 16 disposals, eight marks, two tackles and five rebound 50s. They are either side of rock full-back Kristi Harvey who bounced back from a rare omission from this side last week, to be the general once again with 14 touches, six marks – one contested – and seven rebound 50s.

At half-back, Under 16s talent Charlotte Riggs is the key target, making back-to-back Team of the Weeks, and this time had 17 disposals, seven marks – two contested – two tackles and three rebound 50s. Whilst Goodwin is on one half-back flank, West Adelaide’s Beatrice Devlyn is on the other, managing 23 disposals, eight tackles, four inside 50s and nine rebounds 50s in a hard-working effort for the Bloods, and their only representative in the team.

As always the midfield was stacked this week, with Norwood teenager Sachi Syme alongside captain Campbell on-ball. Syme picked up a round-high 12 clearances, as well as 27 disposals, tow marks, eight tackles, four inside 50s and four rebound 50s during the Redlegs’ big win over the Westies. Also on-ball was debutant and former Subiaco talent Abbey Dowrick who managed the 27 disposals, five marks, two tackles, seven clearances, six inside 50s, two rebound 50s and an early goal.

On the wings, Central District’s Laitiah Huynh also earned her second consecutive Team of the Week, after 19 disposals, four marks, four tackles, two clearances and three inside 50s saw her create plenty of run and carry for her side. Similarly, Jessica Edwards was outstanding across the ground for the Roosters, racking up 28 disposals, eight marks, five tackles, four clearances, four inside 50s and four rebound 50s in their win. The starting ruck this week is Bulldogs’ Isabelle Starmer who is no stranger to this team, recording 25 disposals, seven marks, five tackles, 28 hitouts and three clearances, making her an easy choice.

On the half-forward flanks, the hybrid talents of Brianna Arthur and Jessica Bates slot in, with the midfielders more than capable of resting forward and having an impact. North Adelaide’s Arthur picked up the 26 disposals, three tackles, three clearances and five inside 50s, whilst in the same game, Bates recorded the 26 disposals, five marks, nine tackles, three clearances, four inside 50s and three rebound 50s for the Bays. The Roosters’ Cristie Castle is at centre half-forward after 16 disposals, eight marks – tow contested – five tackles, two inside 50s and 2.1, providing a target for the midfielders.

A third Rooster in the front six is accompanied by two Redlegs, with the experienced Jade De Melo alongside youngsters Grace Mulvahil and Alana Lishmund. De Melo managed the 18 disposals, four marks, two tackles and three inside 50s to add that touch of class to the Roosters front half, as Lishmund and Mulvahil both slotted three goals, whilst combining for 30 disposals and 10 marks as well.

The interchange was a very difficult one to pick, with so many even contributors across the SANFL Women’s for Round 7. We start with Sturt’s sole representative Georgia Bevan who stood out with a team-high 24 touches, as well as four marks, seven tackles and two rebound 50s across the field. Also on the bench are a bunch of midfielder-forwards who can hit the scoreboard. Central District’s Georgia McKee (17 disposals, three marks, five tackles, four inside 50s and a goal), South Adelaide’s Jess Waterhouse (19 disposals, two marks, six tackles, five clearances, four inside 50s and a goal) both started forward and managed to get a goal on the board rotating through the middle.

The three emergencies this week are consistent Bulldogs talent Karissa Searle who had the 18 disposals, four marks – one contested – three tackles, two clearances, two inside 50s and a goal, along with Sturt’s Ellie Lynch and North Adelaide’s Katelyn Pope. Both playing through the midfield, Lynch amassed 18 disposals, six tackles, six clearances, three inside 50s and four rebound 50s, whilst Pope’s run and carry saw her record 19 disposals, four marks, four tackles and five inside 50s winning the ball between wing and half-forward.

In terms of unlucky omissions, Eagles duo Jordann Hickey and Shineah Goody were both considered for the defensive end, whilst West Adelaide’s Lucy Boyd was close up the other end. Through the midfield, three names stood out among those others considered, with Norwood’s Tesharna Maher, South Adelaide’s Tahlita Buethke, and ex-Eagle, Central District’s Jovanka Zecevic in her first game against her former club.

ROOKIE ME CENTRAL SANFLW TEAM OF THE WEEK: ROUND 7