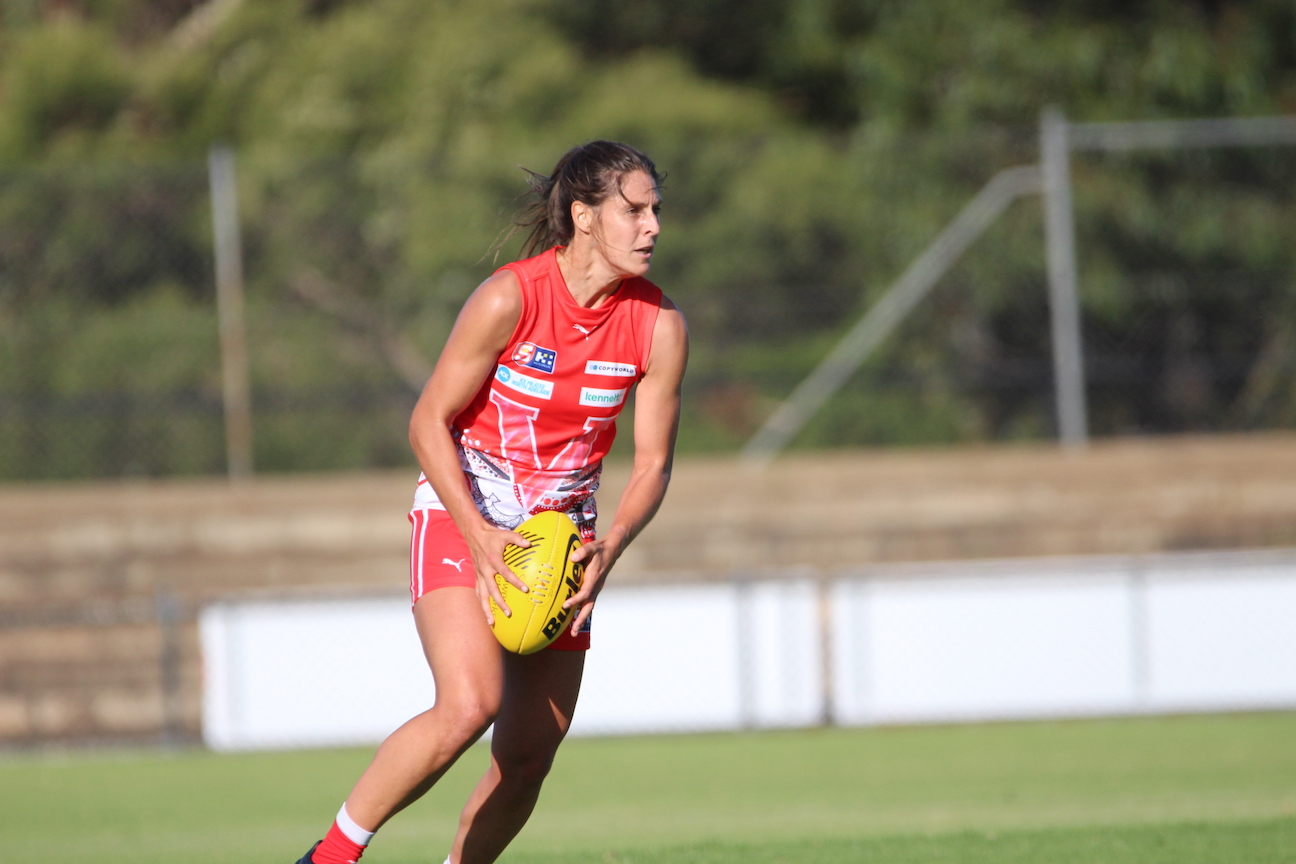 NORTH Adelaide has survived an almighty scare against Woodville-West Torrens Eagles in Round 8 of the South Australian National Football League (SANFL) Women’s. The Roosters had the tightest win over the weekend, whilst Sturt bounced back from back-to-back losses to post a win over West Adelaide, whilst South Adelaide and Norwood kicked away in respective final terms to pick up the two points over Central District and Glenelg.

Sturt is back on the winners list after consecutive losses, with the Double Blues posting a resounding 64-point victory over West Adelaide at Hisense Stadium. The visitors slammed home six goals to zip in the first half, and ended up slotting the first 11 goals of the game before the Westies kicked a late goal to Lucy Boyd. In the end, that early dominance saw Sturt triumph 11.6 (72) to 1.2 (8).

It was clear from the get-go that the Double Blues were firmly on top, as Georgia Bevan looked lively and was setting up scoring chances with Amy Brooks-Birve kicking two first quarter goals. Though Ally Ladas marked in the goalsquare she strangely handballed to Alysha Healy who’s kick was smothered, but soon the rising star converted one of her own. That trend continued after quarter time, as Elsie Dawes, Ladas and Kate Harris all added their names to the goalkickers list.

Despite the tireless work of Beatrice Devlyn and Bloods skipper Madison Russell, the Westies were just overwhelmed, and Abbey Rigter‘s back-to-back goals within a minute midway through the third term sealed the deal. Brooks-Birve kicked her third, and then young gun India Rasheed put through two Goal of the Year contenders to blow the margin out beyond 11 goals. Boyd kicked a well-deserved late major thanks to hard-running, but it ultimately mattered very little in the end.

Sturt had plenty of contributors with Bevan racking up 25 disposals, four marks, eight tackles, two clearances, five inside 50s and two rebound 50s, sharing the load with the likes of Alisha Gepp (27 disposals, seven marks – one contested – eight tackles and five clearances) and Harris (21 disposals, five marks, four tackles, six clearances, four inside 50s and a goal. Rasheed, Rigter and Brooks-Birve all combined for seven of the side’s 11 goals, whilst Jaimee Wittervan also stood out thanks to 16 disposals, five marks – one contested – four tackles and seven clearances.

In a ladder-defining result, South Adelaide managed to hold off Central District and solidify fourth spot for the moment thanks to a 16-point victory at Noarlunga. The Panthers had a goal on the board in the opening minute through Jess Waterhouse, who was ultimately the difference in the end thanks to her three goals. Though the Bulldogs looked like hitting back through the middle stages of the game, Waterhouse’s two late majors sealed the game and the Panthers got up for their fifth win, 6.2 (38) to 3.4 (22) in front of home fans.

After Waterhouse’s early goal, the mood was quickly turned sombre after talented youngster Tahlita Buethke came off in the hands of the trainers with a suspected knee injury. Though Waterhouse was dangerous, Nicole Campbell and Shelby Smith were starring for their respective teams, whilst Shannon Murphy sailed a goal home from just inside 50 courtesy of a bit of help from the wind.

The second term belonged to the Panthers as Shae Archbold got on the board after a goalless game last week, and then second gamer Kiahni Russell snagged back-to-back majors to put her side 19 points up late in the half. Defenders Jaslynne Smith and the returning Tahlia Meyer both produced strong performances, and held up the fort as South Adelaide took a 19-point lead into the main break.

Though the Bulldogs seemed to have more chances in the third term, they could not put one through the big sticks. That was until young gun Georgia McKee broke the drought by reading it off hands at a forward stoppage perfectly to slam home a goal. That proved to give them a breather, but Waterhouse snuffed out that hope in the final term as she kicked two more majors including a classy dribbler from the pocket. After missing a set shot minutes earlier, Caitlin Wendland made good on a free kick and set shot after the siren, bringing the final margin back to 16 points.

Campbell seemed to rack up far more than her allocated 18 disposals such was her impact, with the talented midfielder also recording five marks – three contested – five tackles, four clearances, two inside 50s and two rebound 50s. Meyer (24 disposals, six marks – one contested – six tackles and three rebound 50s) and Smith (20 disposals, four marks, three tackles and three rebound 50s) were both incredible in defence. Through the midfield, Nari Wright recorded 24 disposals and team-highs in tackles (11) and clearances (six) to lead the way, whilst Nicole Collie and Waterhouse up their respective ends also stood tall.

A starring three-goal last quarter performance from young gun Alana Lishmund has helped Norwood get over the line against Glenelg and reverse the result of the heavy battering they copped at the hands of the Bays back in Round 1. The reigning premiers unfurled the flag finally back at home all the way in Round 8, but it was not quite the ending they had envisaged, dropping their second consecutive game by going down to the Redlegs, 7.2 (44) to 2.4 (16).

It was an omen of things to come when Lishmund slammed home the first goal just 23 seconds into the match with a clever dribble goal. The return of ruck Leah Cutting was proving decisive as the smaller Shay’Lee Dayman was having to do the bulk of the work. The opening term seemed to go the way of the visitors early as an end-to-end play resulted in Grace Mulvahil scoring Norwood’s second major. Glenelg star Sarah Goodwin set up a goal with her run to get it inside 50 to her captain Ellie Kellock who got it to usual defender Sarah Wilton for a much-needed major.

The second term was even with Glenelg having more chances, though Kellock cancelled out the Redlegs’ early goal to Amelia Rusden with a major on the run after missing one a few minutes prior. Glenelg teenager Ella Boag was starting to get involved as her, Jessica Bates and Goodwin were starting to get on top. Despite having numerous chances in the third term, the Bays could only score two behinds – to 50-gamer Madisyn Freeman and Bates – and cut the deficit back to four points.

Missing those chances from a heavy allotment of inside 50s proved to be costly for the home side, as Norwood – lead by Lishmund – ran away with it in the final quarter. The teenager marked and nailed a set shot, then sidestepped an opponent for her second and third majors in the opening five minutes, almost had a magical one from outside 50, then kicked her fourth with a great goal on the run eight minutes later. Cutting sealed the deal and got mobbed by teammates in the final few minutes for the Bays to celebrate a 28-point victory.

In the tightest scrap of the weekend, top of the table North Adelaide got more than it bargained for when it headed to play bottom two side Woodville-West Torrens. Though not able to get the win, the Eagles were competitive throughout, and had their been able to convert more chances early in the game, they might well have come away with the upset. Instead, a last quarter Hannah Ewings goal, and a series of behinds got the Roosters over the line to ensure they remained the benchmark team of the competition this season.

The opening term was the busiest of the day, with four of the seven majors kicked in it. Ewings managed to get it in front of the classy Jade De Melo to kick the game’s opener, before Eagles fans perhaps had to do a double-take. Defenders Zahn Anthony and Renee Forth were thrown forward in the game and both slotted goals,, whilst even defensive midfielder and captain Annie Falkenberg got in on the act with a goal after the siren to put the Eagles up by 13 at quarter time.

Despite it looking like an upset was brewing, the Roosters did what they do best and were happy to grind away to hold the Eagles goalless in the final thee quarters. Kristi Harvey was a rock once again in defence, whilst Erin Sundstrom and Jessica Edwards were busy, the latter racking up an unprecedented amount of disposals. Up forward, Elaine Grigg brought the heat, whilst Katelyn Pope was also lively. Jessica Sedunary missed a couple of chances on goal which could have turned the tables by the end of the game, with an early set shot to Amie Blanden also going begging.

The second half was a real armwrestle with only majors to State Academy members Grigg and Ewings able to bring the Roosters back into the game. Grigg’s was from a strong tackle on Shineah Goody in front of goal, whilst Ewings’ kicked hers after being taken high nine minutes into the final term. The Roosters just controlled play in the last 20 minutes to not give the Roosters anything, and even kept them scoreless, slowly adding behinds to the total. A heartbreaking scene of Sundstrom having to be stretchered off meant a sombre tone towards the end of the match, but the Roosters came away with the points, 4.7 (31) to 3.9 (27).