REPRESENTATIVE season continues to roar on, with both Victorian sides notching wins at the Under 18 level this past weekend. In the latest edition of Caught the Eye, we highlight some of the top performers and outstanding prospects from either game.

A GAME packed with plenty of momentum swings saw Vic Metro hold on to win against Western Australia, 16.5 (101) to 10.14 (74), on the back of seven goals from Matthew Jefferson. The Oakleigh Chargers key forward has come a long way after some inaccuracy earlier in the year, finally putting the results on the scoreboard with seven majors from as many shots, with five of them coming in a dominant third quarter.

Despite the loss, WA still had some players enhance their draft credentials, none more-so than Elijah Hewett. The powerful midfielder put on a clinic with a game-high 29 disposals, 11 inside 50s and two goals, showing how damaging he can be.

Another midfielder to impress was Darcy Jones, who like Hewett nailed two goals. It was his agility around the ground that really impressed, and despite his light frame, he wasn’t afraid to go in and win his own ball.

It was good to see Claremont’s Sam Gilbey begin to get back to the form which saw him so highly touted after some impressive games last year. Fellow defender Jedd Busslinger, despite a slow start, really got to show his rebound game in the second half, taking several marks and offering plenty with his ball use.

For Metro, it was Sandringham duo Will Ashcroft and Cameron Mackenzie who once again impressed, with both proving huge factors in their sides’ third quarter blitz. It was a typical Ashcroft outing, with his contested game and spread once again coming to the fold.

Draft bolter Mackenzie keeps showing he is a likely top 10 pick with his speed around the ground and 187cm frame, which he used to advantage at the coalface. His ever growing work rate keeps getting better with a team high 28 disposals.

Up forward, Jefferson was a force in the air, and unlike many powerful and strong key forwards who have often taken over the champs in recent years, Jefferson did so in spite of his wiry frame – able to leap and take contested marks with ease.

If he didn’t take them, there were always the likes of Harry Sheezel and Alwyn Davey buzzing around at his feet, with those two each kicking a pair of goals each, proving great avenues to the big sticks for Metro so far in the champs.

In lovely weather at the Gabba, it was Vic Country once again getting the job done on the backs of reliable midfield duo Jhye Clark and Mitch Szybkowski. The victory came against a gallant, but fading Allies team, 10.15 (75) to 5.12 (42).

Clark and Szybkowski were joined by a pair of Dandenong players, who put in their best games for the year. Namely, they were Jaxon Binns and Henry Hustwaite. The former finished with a staggering 39 disposals, highlighting his impressive work rate, while the latter showed his class as a full-time midfielder, making the transition from defence last week.

Bottom-ager Harley Reid was once again impressive down back, and up forward you had Aaron Cadman once again threatening with two goals, which could have been more if not for inaccuracy. He was well supported by smalls Noah Long and Jacob Konstanty. It was great to see Long finally returning to his best, as Konstanty ran amok inside 50 with his speed and energy coming back from illness.

For the Allies, they once again had a fairly decent mix of contributors without one player being a clear best. Lachlan Cowan offered plenty of rebound and toughness from half-back and the ever reliable Harry Rowston showcased his great work rate, winning a balance of contested and outside ball to finish with a team-high 28 disposals, seven clearances and eight inside 50s.

Athletic defender Tom McCallum backed up his game last week with another great performance, and although fairly quiet in the first half, Brisbane Lions father-son prospect Jaspa Fletcher showed his talent with 19 disposals and a lovely goal on the run, which has become a staple of the talented midfielder. 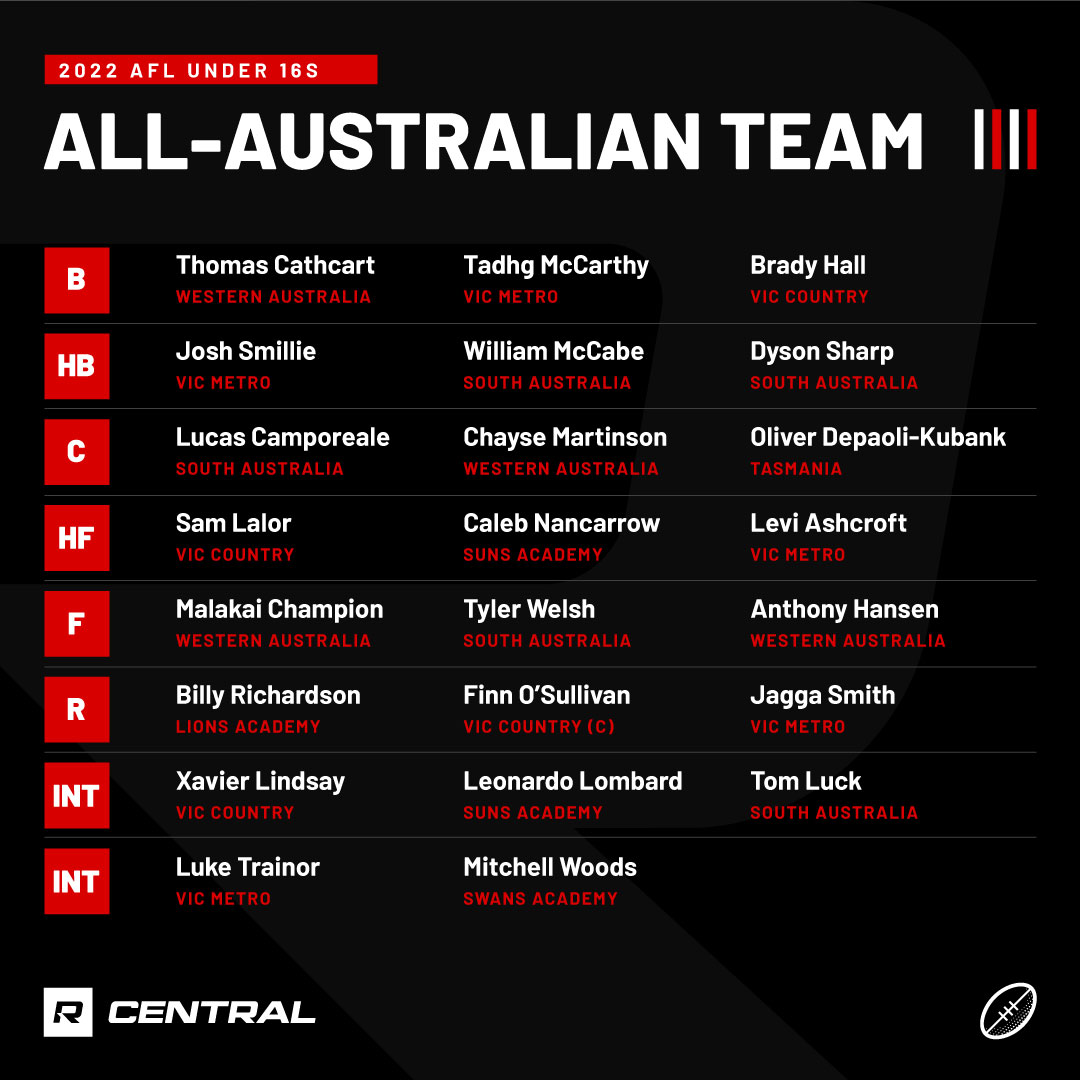 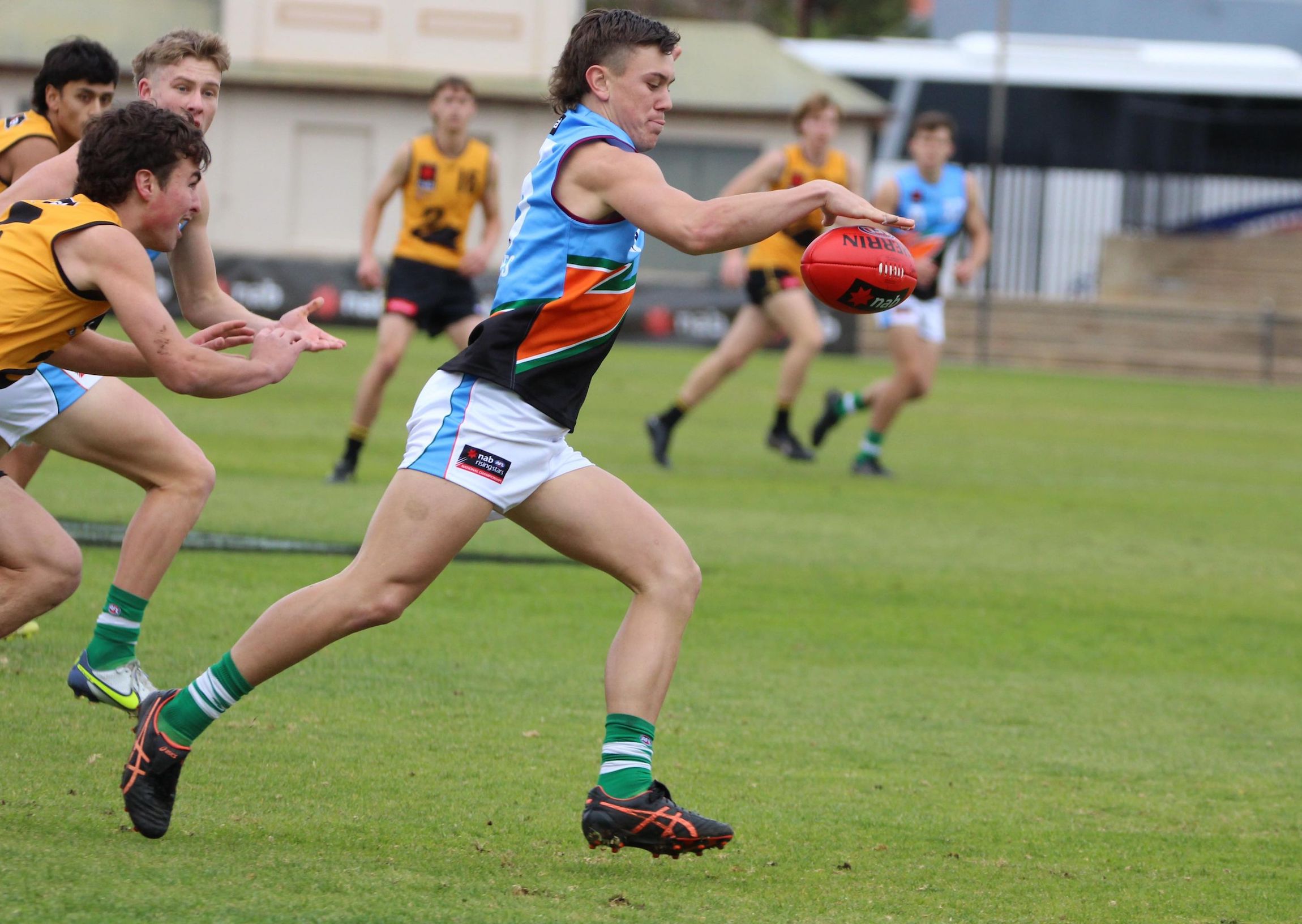 THE 2022 AFL Under 18 National Championships are over for three of five teams, meaning the Most Valuable Players (MVPs) have begun to roll in. South Australia, Western Australia, and the Allies (comprising of players from Northern Territory, NSW-ACT, Queensland, and Tasmania) have all announced their best and fairests, having played out their four fixtures […]

WESTERN Australia notched its first win of the 2022 AFL Under 18 National Championships at the final time of asking, after downing South Australia by 20 points on Sunday. It was the last chance for prospects from either state to shine on the representative stage, and plenty did so in what was a high-scoring encounter […]

IN one of the most entertaining contests of the AFL Under 18 Championships, Western Australia finished on a high note, winning its first game of the 2022 carnival by defeating a determined South Australia by 20 points at Joondalup Stadium today. The Sandgropers did not have it all their own way and looked in trouble […] 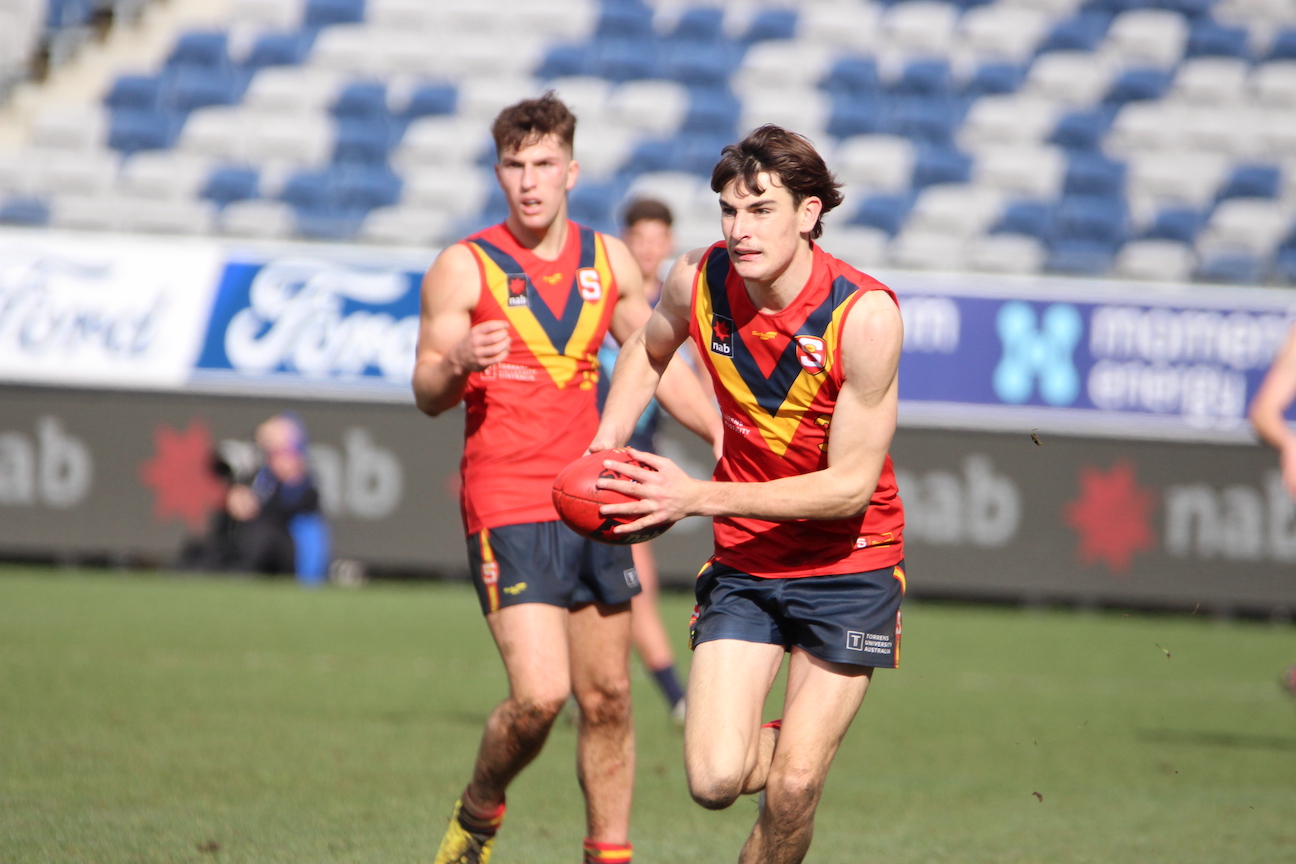 WESTERN Australia’s last roll of the dice comes on Sunday, as the Black Ducks continue their search for a win at this year’s Under 18 National Championships. Finally playing in front of a home crowd, it’s South Australia who comes to town as the two sides throw down at Optus Stadium, before the West Coast […]