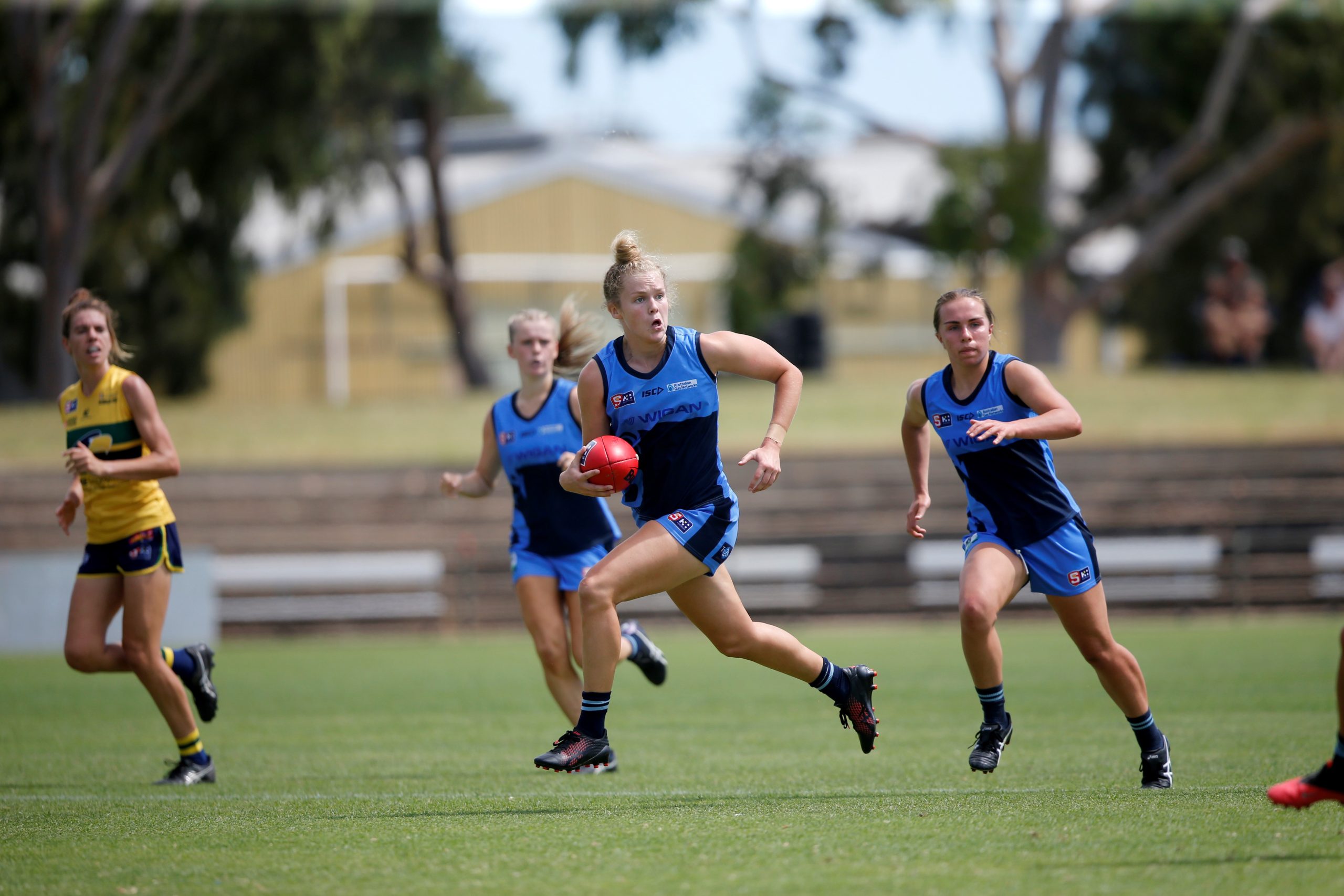 ANOTHER round of South Australian National Football League (SANFL) Women’s action kicks off tonight, and completes tomorrow. In the standalone Friday night clash, West Adelaide hosts Woodville-West Torrens in a bid to remain undefeated, whilst opposite ends of the town clash on Saturday, with the bottom two sides also going head-to-head. Meanwhile, Sturt is the next contender to try and take down the reigning premiers Glenelg.

Last year’s grand finalists West Adelaide will be hoping to go back-to-back at home to start the 2022 season, when they take on the reigning wooden spooners, Woodville-West Torrens Eagles. The Eagles are a significantly improved outfit in 2022, but West passed the North Adelaide litmus test, and have the luxury of rotating players to find the right mix. Coach Mark Moody would have been pleased with the third term against the Roosters, but would have had some nervous moments in the last before holding on by five points. The Eagles on the other hand just had that seven-minute passage in the second term where Sturt booted three goals to blow the game wide open.

West Adelaide has made at least four changes, with Emma Kilpatrick potentially coming in for her SANFL Women’s debut out of Henley Sharks. Also returning to the side is Crows-listed talent Abbie Ballard who joins a stacked midfield with Jess Macolino and Beatrice Devlyn. The latter played in defence last week, but with Tiarna Harfield returning to the side, Devlyn can move into her preferred role onball. Captain Madison Russell was superb last week, with Zoe Venning and Keeley Kustermann a couple of consistent teenagers.

For the Eagles, highly-touted youngster Grace Martin makes her debut at League level, coming out of SMOSH West Lakes. She joins captain Annie Falkenberg, former Crows-listed Jessica Sedunary and developing ruck Brooklyn Kraft as some crucial ins. Kraft replaces undersized ruck – though really tall forward – Astrid Gooley in the side. Falkenerg has been named in a super-experienced defence alongside Leah Kaslar and Renee Forth, with West Australians McKenzie Dowrick and Brianna Hyde showing promising signs in their SANFLW debuts up forward last week.

The game is likely to be predominantly played in West’s forward half, so the key to the Eagles will be on the counter attack, and if the defence can weather the storm and then attack on the rebound. The Bloods should have too much depth and midfield strength to win here, but it will be a great test for the Eagles’ youth.

Currently sitting in the bottom two after being on the receiving end of the two biggest losses of Round 1, there are still reasons for both Central District and Norwood to be optimistic heading into the second round. Norwood was a fair way away from the benchmark team in Glenelg, but Brooke Tonon effectively stole the show in the second half. The Bulldogs on the other hand, were right in it until the third term, when South Adelaide kicked away and the Dogs conceded seven of the last eight goals of the game. Neither team can afford to give the opposition in the momentum because both can score quickly if needed.

Central District welcome back a number of key players including talented teenager Lauren Breguet and consistent ball-winner Paige Allan. After a heroic effort in defence – though in vain – last week, Madison Lane as been named in the midfield, with Laitiah Huynh taking up the role in defence. The Bulldogs midfield is solid, lead by Isabelle Starmer in the ruck and captain Shelby Smith on-ball. They will look to take advantage against a younger midfield, whilst Demi Sonneman showed promising signs in a two-goal performance up forward since switching from defence.

Norwood has welcomed back talented midfielders Isabel Martin and Alana Lishmund, but they replaced forward/ruck Rosie Boon, and Tamsyn Nation who are both out due to COVID-19 protocols. The midfield of Lishmund, Jade Halfpenny, Molly Brooksby, Sarah Branford and Lana Schwerdt is incredibly young, but has great upside for the future. Captain Alison Ferrall was rock solid in defence last week, whilst Morgan Johnston also showed great experience coming out of the back half.

Both teams are experimenting with positions this season to find the right mix, but Central showed more positive signs last week, so should be favourites, particularly at X Convenience Oval. The match could go either way.

North Adelaide will look to overcome more challenges to bounce back from a Round 1 loss against West Adelaide, and try and knock over South Adelaide on the road. The Panthers looked a dangerous uint during their win over Central District in Round 1, kicking seven of the last eight goals to grab the four points and sit second on the ladder. The Roosters came agonisingly close to running over the top of Westies, but left it a touch late and fell just short.

It is a competition-wide challenge in the world we live in, but the dreaded COVID-19 health and safety protocols has certainly hit the Roosters hard. Regaining the likes of co-captain and full-back Kristi Harvey and midfielders Jaimi Tabb and Erica Greet from it after missing Round 1, the Roosters have now lost another three players including co-captain and centre half-back Erin Sundstrom, Ella Metcalfe and Tayla Gordon. After a solid Round 1 performance, Paris Crowe will also miss with a knee injury. Though having Sundstrom and Metcalfe would have made the defence near impenetrable, particularly by air, the Roosters still have ex-Carlton talent Jessica Edwards, and youngsters Amelie Borg and Jamie Parish. Tabb will join the speedy Katelyn Pope up forward, with the incredibly talented Hannah Ewings rotating around the forward half, and Greet joining Julia Clark on the wings again.

South has also lost a crucial player, with the experienced Nicole Campbell (larynx) the sole confirmed out. Into the side comes Northern Territory Pinktail and ex-NT Thunder talent Caitlin Couch, and Maddy Rasmussen (Kenilworth) who are both in-line for debuts. Experienced yet still young defender Jaslynne Smith will play her 50th South Adelaide game, and Caitlin Ross is the other inclusion in the side. The South Adelaide forward line will be one to watch after Shae Archbold and Jess Waterhouse combined for six goals in Round 1. Through the midfield, the tackling duo of Gypsy Schirmer and Tahlita Buethke support captain and ruck Brianna Wedding, whilst Lucy Northcott has been named back in defence after a solid – but inaccurate – game at full-forward.

North Adelaide should have the depth and strength to win this one. You can never count out a Panthers side irrespective of inexperience. In saying that, North looked very good against West last week and it would be very surprising not to see them back in the finals again, and to do that, it includes wins over younger sides.

After getting its season off to the perfect start, Sturt now faces the biggest challenge in South Australian women’s football. The Double Blues accounted for Woodville-West Torrens courtesy of a second quarter burst, but the difficulty will be switched right up to full when they host Glenelg at Thebarton Oval. The home crowd might be able to spur the Double Blues on, with Glenelg coming off a a 12-goal thumping of Norwood at The Parade. Now the Bays will look to repeat much of the same, albeit a far stronger defensive back five.

Sturt’s defence is superb, with Zoe Prowse able to slide in there, and Alex Ballard find her spot after playing at both ends. They share the defensive 50 with Kiera Mueller, Maya Rigter, Jaimee Wittervan and Hannah Prenzler, and the Double Blues will need it against the Glenelg attack. After a dazzling best on ground performance last week, Jasmyn Hewett earned her call-up to the Crows, with ex-basketballer Alex Pearce able to make her debut in the Double Blues. She is joined in the side by Ally Ladas and Sarah Wallace.

Glenelg will be without Molly Scott (hamstring) for the clash, bringing in Reynella’s Renee Wurfel in line for her debut, and Flagstaff Hill’s Shay’Lee Dayman earning another potential chance to debut on the extended interchange. The Bays midfield was driven by a couple of young guns in Piper Window and Sarah Goodwin with the latter doing well on a wing and dropping back to half-back. With captain Ellie Kellock playing her usual role, and the likes of Jessica Bates bulldozing her way to 19 tackles last week, it allowed the likes of Tonon (six goals) and Chelsea Packer (three) to go to work in front of the big sticks.

The clash will be a great test for young Sturt to measure itself against the best team in the competition. It is too difficult to tip against the Bays at this stage, but expect the transition from defence to offence to be a little trickier for Glenelg this week.