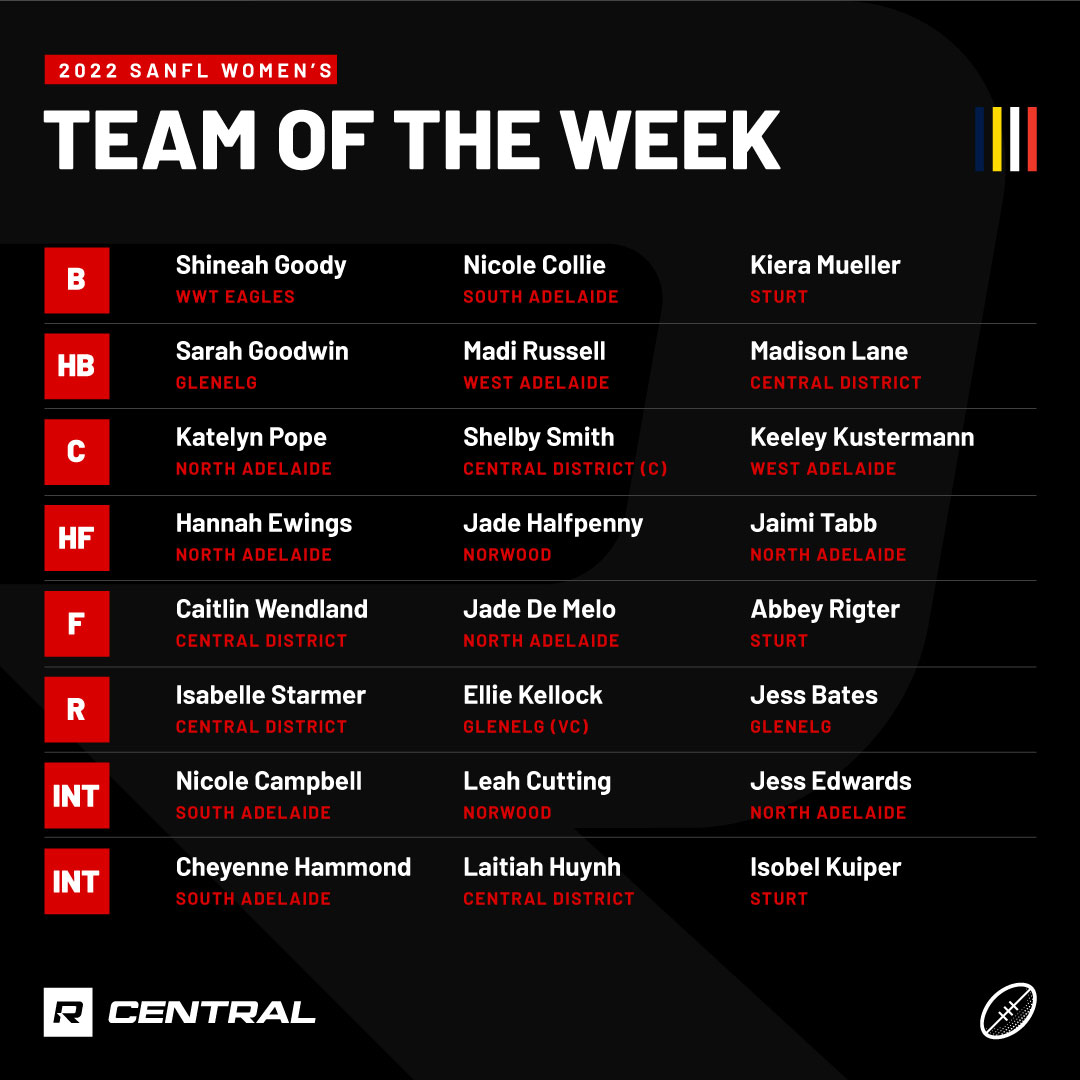 CENTRAL District and North Adelaide have an equal league-high five players in our South Australian National Football League (SANFL) Women’s Team of the Week for Round 11. The Bulldogs and Roosters both had important wins and recorded the five players, whilst fellow winners Glenelg and Sturt had three players apiece in the side. South Adelaide and West Adelaide lost but still managed the three players apiece, with Norwood (two) and Woodville-West Torrens (one) rounding out the eight sides.

A couple of captains lead out the hypothetical SANFL Women’s Team of the Week for Round 11, with Central District leader Shelby Smith and Glenelg skipper Ellie Kellock captain and vice-captain respectively. Smith amassed a round-high 34 disposals – the only player with more than 30 touches – as well as two marks, eight tackles, four clearances and five inside 50s. Kellock was named vice-captain after 22 disposals, three marks, four tackles, seven clearances, six inside 50s and two rebound 50s.

There is an even spread across the back six this weekend with six different clubs represented in each of the six different positions. There is certainly a touch of youth with four teenagers in the defensive third of the ground. Coming back from her Most Valuable Player (MVP) award-winning championships, Woodville-West Torrens’ Shineah Goody is in the back pocket, and is the only Eagle in the squad having starred in defeat with 23 disposals, six marks – one contested – nine tackles, two clearances, two inside 50s and five rebound 50s. She is joined in there by fellow State Academy members Kiera Mueller and Sarah Goodwin. Sturt’s Mueller recorded 23 disposals, four marks – one contested – nine tackles, four inside 50s and four rebound 50s, whilst Glenelg’s Goodwin finished with 18 touches, two marks, three tackles, four inside 50s and six rebound 50s.

Central District’s Madison Lane is the fourth teenager in the back six, with the 18-year-old having a huge 24-disposal, two-mark, three-tackle and four-inside 50 game pushing up the ground. Rounding out the back six are more experienced pillars in West Adelaide captain Madison Russell (18 disposals, five marks and six rebound 50s) and South Adelaide full-back Nicole Collie (13 disposals, two marks, two tackles and four rebound 50s) who were both brave in their respective side’s losses.

North Adelaide is well represented in the front six with a couple of midfielder-forwards on the flanks, and an exciting two-goal forward at full-forward. Jade De Melo (13 disposals, six marks – one contested – two inside 50s and 2.2) headlines the deep forwardline, with Roosters teammates Hannah Ewings and Jaimi Tabb also in the side. Ewings had 22 disposals, four tackles, three clearances and 10 inside 50s, whilst Tabb recorded 17 disposals, five tackles, five clearances, three inside 50s, two rebound 50s and booted 1.2.

Central District match-winner Caitlin Wendland booted three goals from 21 disposals, four marks, seven tackles and three inside 50s to earn a spot in our forward pocket, with Sturt’s Abbey Rigter (seven disposals, three marks – one contested – two tackles, two inside 50s and two goals) in the other. Norwood’s Jade Halfpenny might have played midfield in the loss to Sturt, but using creative liberties would be starting centre half-forward in this side given the strength of the midfield. Halfpenny finished with 19 disposals, nine tackles, five clearances, three inside 50s and three rebound 50s.

The three emergencies chosen this week were Norwood’s Sophie Armitstead, Central District’s Lauren Breguet and West Adelaide’s Lily Johnston, all of whom had some outstanding performances, but just fit outside the final 24. There were plenty of others considered too, with Glenelg’s Madisyn Freeman and Piper Window, and Sturt duo Elsie Dawes and Kate Harris close. Norwood’s Lana Schwerdt, Eagles’ Ella Little, West Adelaide’s Zoe Venning and Beatrice Devlyn, and South Adelaide’s Jess Kirk were also among players on the shortlist to be selected.