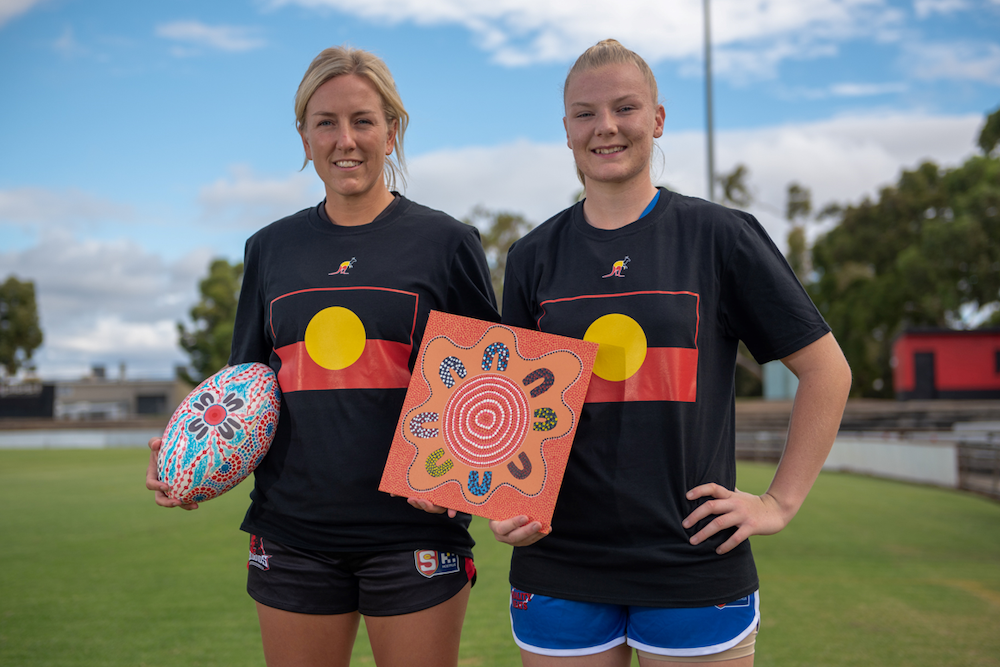 ALL eight South Australian National Football League (SANFL) Women’s clubs will pay tribute to First Nations Australians with the inaugural Indigenous Round taking place this weekend. All four Round 3 matches – which will be played without any crossover to another match for the first time this year – will feature 50m arcs that will be painted red, black and yellow to represent the Aboriginal flag. Players will also don Indigenous Round warm-up tops, whilst representatives will exchange cultural gifts. A Welcome to Country will also be performed before each bounce.

Kicking off the blockbuster weekend, Norwood hosts Woodville-West Torrens at Coopers Stadium. Both sides bounced back from disappointing Round 1 losses to post ultra-impressive Round 2 wins, making this an even contest. The Redlegs were shellshocked against a red-hot Glenelg outfit in Round 1, but suffocated Central District in Round 2, only conceding two inside 50s in the first half. They will be looking to repeat that effort against an Eagles side that caused an upset against West Adelaide last Friday night, and will be hoping lightning strikes twice.

Norwood has made the one change with Jennifer Frost replacing Charlotte Nenke, while Klaudia O’Neill is in line to make her debut for the Eagles. Yet another young talent, O’Neill turned 15 on Tuesday, and will be hoping to celebrate with a win tonight. Jasmine Simmons has also been added to an extended interchange with no confirmed outs as of yet. The Eagles forward line that saw Jordann Hickey, McKenzie Dowrick and Jessica Sedunary combine for seven goals is difficult to contain, whilst Shineah Goody is unlikely to be given the same freedom she was in the first half last week before being locked down. Norwood’s young midfield impressed in Round 2, with Jade Halfpenny having a ripping start to the season, and Sarah Branford and Sachi Syme also finding plenty of the ball. Captain Alison Ferrall has been great at navigating the young side, whilst her opposite captain Annie Falkenberg made a productive return last week.

This has all the hallmarks of a cracker. On form, Eagles perhaps have the upper hand, but at The Parade, Norwood will the crowd support so expect it go down to the wire.

After a shock loss at home to Woodville-West Torrens last Friday night, West Adelaide will be out for blood against a winless Central District outfit desperate to put four quarters together. Both these sides have shown some great glimpses, with Westies having more experience, but the young Pups coming on in leaps and bounds. The big question mark for West Adelaide will be whether or not it can overcome the injury toll sustained heading into the match. Premier ball-winner Jess Macolino (calf), experienced duo Nicole Hooper (ankle) and Louella McCarthy (hamstring) are all out, as is newcomer Paris Francis (cracked sternum). Central has its own injury question mark, with Dakota Williams pulling up tight after a quarter last week and will be monitored heading into the game.

Those losses for West Adelaide mean opportunities for new players, and along with Tiana Fernandez, three players are in line to make their debut. Highly-touted youngster Lily Johnson comes into the side having crossed to the state from the Apple Isle, whilst 19-year-old Ella Summers and 25-year-old basketballer Kaylee Biddell have also been named to play in the match. Though Williams is under an injury cloud, at this stage the Dogs have just made the one change with Kasey Wendland coming back in at the expense of Keely Cannizzaro. The midfield battle will be one to watch, with Crows-listed Abbie Ballard set to go head-to-head with Dogs’ captain Shelby Smith. State Academy teammates last year, Keeley Kustermann and Madison Lane could also go head-to-head, whilst all eyes will be on Georgia McKee after a breakout game last week. West Adelaide captain Madison Russell has been in terrific form, and will look to chop off the Central attacks much like Ferrall did last week.

Prior to team selection West Adelaide would have been a strong favourite especially at home, but Central could take advantage of the amount of new players having to adapt, and the form of some of the Dogs’ key players.

Moving onto Saturday night, and Sturt finds itself in an unusual position of heading into a clash against North Adelaide as favourite. The Double Blues saw off Woodville-West Torrens in the opening round, but the real tick of approval came in Round 2 when they stunned reigning premiers Glenelg. North Adelaide could easily be 2-0 themselves had it not been for first and third quarter lapses against West Adelaide. The Roosters came within a kick in that game, then rolled South Adelaide last week, setting up a huge match against the much-improved Double Blues.

Sturt has potentially regained Jasmyn Hewett for the clash, named alongside Lucy Griffith and Sarah Wallace,, with last week’s debutant Alex Pearce making way for the the Crows-listed ruck. North Adelaide has lost defender Jamie Parish to an ankle injury, but has regained Ella Metcalfe in her place, whilst Cristie Castle also returns. New recruit from Broken Hill, Megan Ryan is a potential debutant on an extended bench. The battle to watch will be both in the midfield, and the North attack against the Sturt defence. Jade De Melo is all class, and Doreena Hansen showed in a third quarter burst what she was capable of. With Castle and Brianna Arthur also in that front half, and the damaging Hannah Ewings rotating forward, the Roosters can be quite the handful. Sturt’s defence managed to hold up against the Bays, though, so the Double Blues coaching staff will back in the likes of captain Maya Rigter, Crows-listed Zoe Prowse, and consistent defenders Kiera Mueller, Alex Ballard and Jaimee Wittervan, whilst Isobel Kuiper has had some sort of start to the 2022 season.

Another nail-biter, North at its best can break through any defence, but Sturt seem to have found the right balance this year. A game that could go either way, if the Roosters can click over four quarters they should get the job done, but Sturt is one of the most consistent four-quarter performers and can hurt North if it does not take its chances.

After a surprise loss last week to Sturt, Glenelg will be on the hunt down south to try and knock off the Panthers. South Adelaide went down in a spirited loss to North Adelaide last week after running away with the contest in Round 1 against Central District. The Bays, after completely obliterating Norwood on the opening night of the season, found the going much tougher against the Double Blues. That game will hold the Bays in good stead coming into this contest, where they should get their fair share of chances, but cannot afford to be too loose in defence with the firepower up front for the home team. Another concern will be the loss of inside midfielder Tessa Kohn to concussion, with Crows-listed Brooke Tonon also out of the side. Samantha Franson returns for the first time this year after cutting her teeth in the Development League given the strength of the new players, alongside potential debutant Renee Wurfel and Lauren Edwards.

Premiership captain Ellie Kellock will celebrate her 50th game on the night, becoming the first Glenelg player to achieve the feat. Without Kohn in the midfield, expect Kellock to lift her game even more, alongside the in-form Sarah Goodwin and potentially fellow young gun Piper Window. The defensive pressure of Jessica Bates and Madisyn Freeman will be crucial, whilst Matilda Scholz will get a great test in the ruck against Panthers captain Brianna Wedding. South Adelaide will be without Tiffany Copley and Caitlin Couch for the match, but have two potential debutants in Maddy Rasmussen and Holly Ifold. The South Adelaide forward line that features the in-form Shae Archbold and Jess Waterhouse is hard to contain, and two crucial midfield additions in Nicole Campbell and Nikki Gore only strengthen the Panthers’ lineup.

South should take it up to Glenelg in parts, but the Bays, coming off a loss and celebrating captain Kellock’s 50th game should have too much for the Panthers and get back to their winning ways.