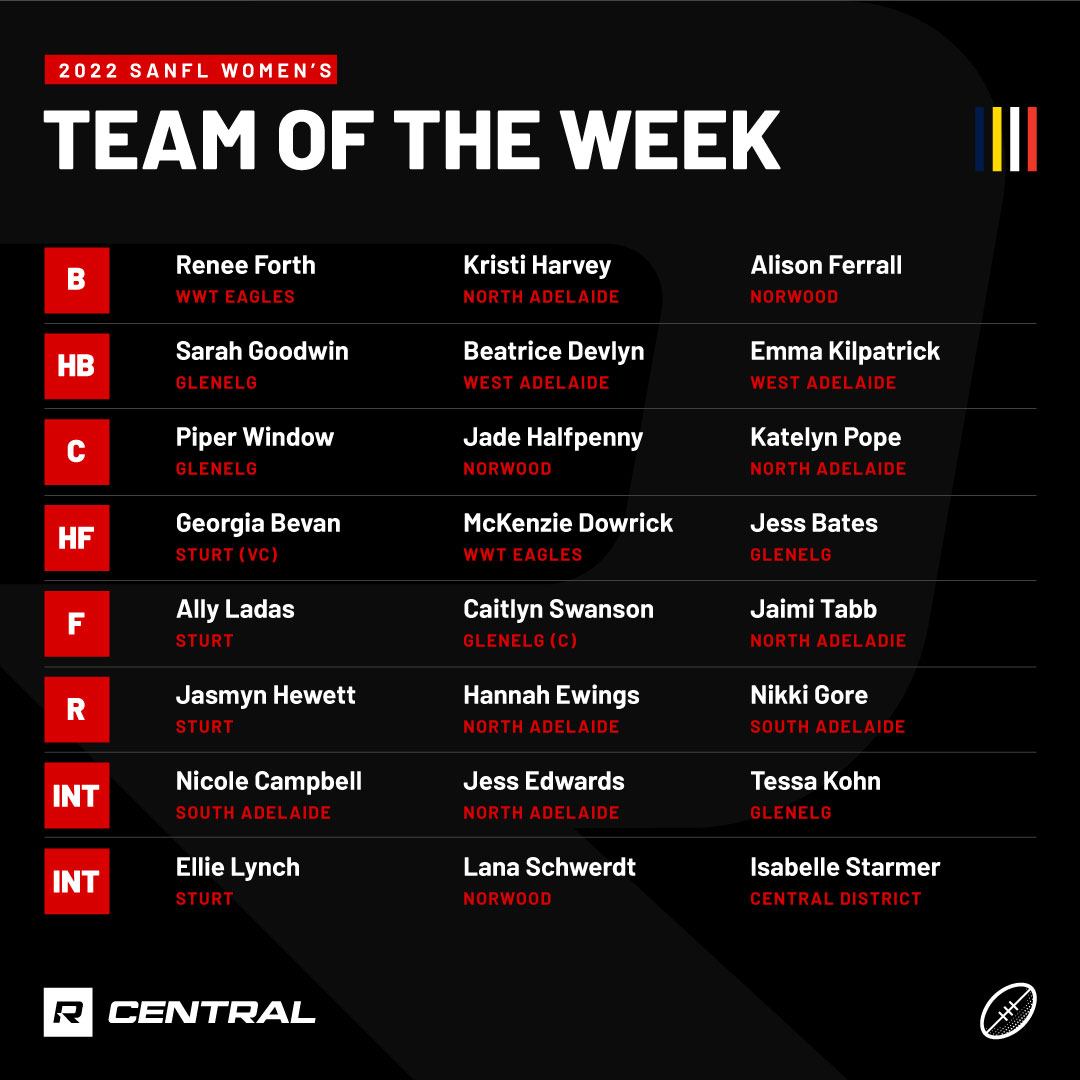 GLENELG and North Adelaide have dominated our South Australian Football League (SANFL) Women’s Team of the Week for Round 4, contributing five players apiece to the 24-player squad. The two impressive winners were just ahead of record-breakers Sturt (four) and fellow victor Norwood (three). The losing sides had two or less, with South Adelaide, West Adelaide and Woodville-West Torrens all on two apiece, and Central District with the one.

It was hard to look past a couple of goal-scoring heroes for the leadership this week, with Glenelg sharpshooter Caitlyn Swanson slotting four goals in the tight win over Eagles taking the captaincy for Round 4. Alongside her inside 50, Sturt’s Georgia Bevan earned vice-captain honours after three goals herself from 17 touches in an eye-catching display.

The back six definitely has a familiar look to it, with five of the six players having already made at least one Team of the Week this year. The last line of defence is leadership and experienced personified, with Roosters full-back Kristi Harvey back again, flanked by Eagles’ Renee Forth and Redlegs’ co-captain Alison Ferrall, the latter of whom has gone four from four in Team of the Week’s this season. Forth has picked up 18 disposals, eight marks, five tackles and six rebound 50s, with Harvey (15 disposals, five marks, five tackles and 10 rebound 50s) and Ferrall (22 disposals, four marks, three inside 50s and four rebound 50s) all playing different roles.

A half-back, the experienced Beatrice Devlyn holds down centre half-back between a couple of youngsters, recording 20 disposals, four marks, six tackles, two inside 50s and seven rebound 50s in a tough loss to Sturt on the weekend. West Adelaide teammate Emma Kilpatrick makes her debut in our Team of the Week, having impressed under pressure on her way to 17 disposals, seven tackles and seven rebound 50s. Glenelg top-age talent Sarah Goodwin (25 disposals, four marks, five inside 50s and five rebound 50s) continued her sensational season in the yellow and black.

Never easy to select, the Team of the Week midfield is again stacked, and features usual suspects once again. Onball, Norwood’s Jade Halfpenny is in teh centre, having graduated from the cheeky half-forward flank selection of the past few weeks. She is anotehr player who has made it into all four sides, and is in the centre square with fellow teenager, North Adelaide star Hannah Ewings, and Crows-listed tackling machine Nikki Gore. The South Adelaide product had 21 tackles to go with 19 disposals, six marks, three clearances, two inside 50s and four rebound 50s in an outstanding game. Halfpenny (20 disposals, three marks, six tackles, five clearances, four inside 50s and three rebound 50s) and Ewings (15 disposals, four marks, five tackles, five clearances, four inside 50s and one goal) were again amongst their team’s best.

Rucking to the midfield is Sturt’s Jasmyn Hewett who had another big game for the Double Blues, picking up 24 hitouts to go with 20 touches, five marks, eight tackles, four clearances, five inside 50s and 1.2. On the wings are a couple of hard runner with Piper Window an inside midfielder who rested forward this week on her way to 19 disposals, seven tackles, dive inside 50s and a league-high eight clearances. North Adelaide’s Katelyn Pope is on the other wing, with the former West Coast-listed speedster amassing 15 disposals, five marks – two contested – four inside 50s and booting two goals in the Roosters’ win over Central District.

There was no shortage of goalkickers this week, indicated by the captain and vice-captain both being named from the forward 50. Alongside Swanson and Bevan was another two players who slotted three goals apiece in McKenzie Dowrick and Ally Ladas. Dowrick kicked 3.2 from 11 disposals and four marks, whilst Ladas – who makes her debut in our Team of the Week this season – had the 10 touches and three inside 50s to go with 3.0. Also inside 50 was North Adelaide’s Jaimi Tabb who kicked a couple of crucial goals in quick succession to finish with 17 touches, three marks and five inside 50s, whilst Jessica Bates had another outstanding game for the Bays, recording 26 disposals, eight tackles, six clearances and three inside 50s.

Central District’s sole representative in the team headlines the interchange, with ruck Isabelle Starmer having another impressive game around the stoppages. She picked up 24 hitouts to go with 16 disposals, four marks, four tackles and four clearances in the Bulldogs’ loss to North Adelaide. In the same game, Jessica Edwards earned her place in the Team of the Week with 18 touches, four tackles, four clearances and a goal, whilst fellow former-AFLW experienced midfielder, South Adelaide’s Nicole Campbell had a team-high 23 touches, as well as five marks – three contested – and 11 tackles at Noarlunga.

After narrowly missing out last week, Norwood’s Lana Schwerdt made it into the Round 4 Team of the Week, following a 25-disposals, nine-tackle, three-clearance and four-inside 50 game. Fellow midfielders Tessa Kohn and Ellie Lynch also feature in the Team of the Week for the first time this year. Glenelg’s Kohn recorded 22 disposals, three marks, 11 tackles, three clearances and a goal upon her return to the League team following injury, while Lynch has been consistent all season, and picked up 21 disposals, three marks, four tackles, three clearances and seven inside 50s in the Doubles Blues’ victory over West Adelaide.

Glenelg came close to a sixth representative in the Team of the Week with Samantha Franson having another great game in the yellow and black, and the same could be said for South Adelaide’s Gypsy Schirmer who caught the eye out of defence. Central District might have only had the one representative in the 24-player squad, but there were plenty who staked a claim, with Karissa Searle named emergency, though the likes of Caitlen Teague, Lauren Breguet and Caitlin Wendland all made the extended list. Perhaps the most unlucky outside the 27 was ball-winning duo Shineah Goody and Samantha Pratt who recorded 23 and 22 disposals respectively, whilst Sturt inside midfielder Isobel Kuiper had a big game despite attracting early attention for the Bloods.

The defence in particular was difficult to pick, with the like of West Adelaide’s Madelyn Zacher and South Adelaide’s Esther Schirmer both close. Sturt’s Kate Harris, Norwood’s Shai Hiscock, North Adelaide’s Doreena Hansen and Panthers’ ruck Jemma Ellis also incredibly close to squeezing into the side.

SANFLW TEAM OF THE WEEK: ROUND 4