SANFLW Round 5 preview: Norwood and Sturt to face-off in huge clash 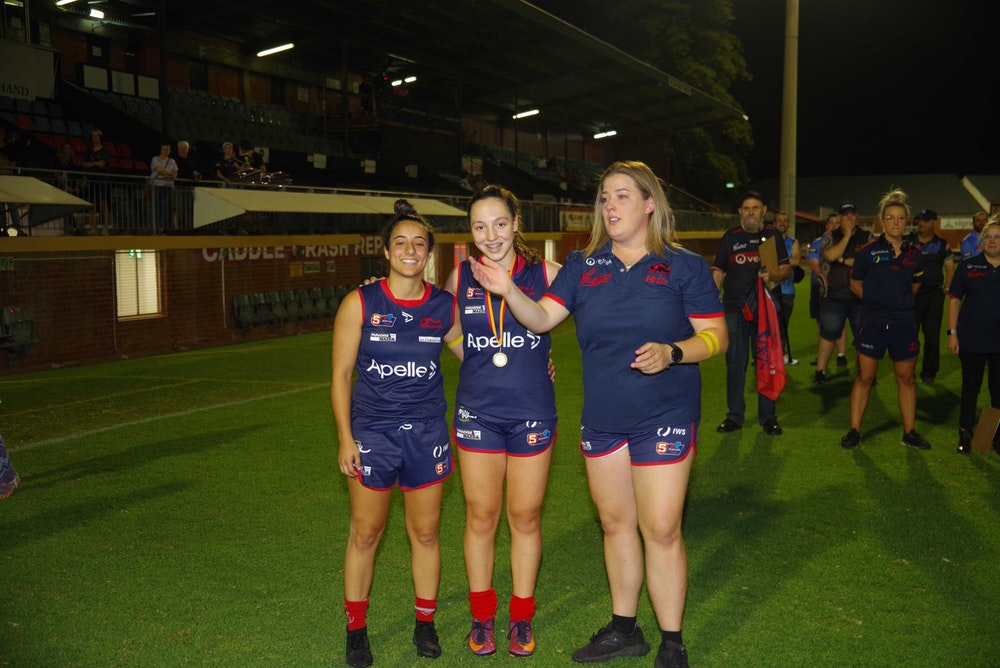 NORWOOD will try and become the first side to knock off Sturt as the sides take part in the annual Ellen Maple Memorial match, as Round 5 of the South Australian National Football League (SANFL) Women’s competition gets underway tomorrow. Across the board, the likes of Woodville-West Torrens and Central District will challenge contenders North Adelaide and Glenelg respectively, whilst South Adelaide hosts West Adelaide in what is a season-defining match in many ways.

After a spirited battle against Glenelg last round, Woodville-West Torrens will be keen to make more of its opportunities up against a North Adelaide side that has its eyes on the prize. Though the Roosters sit at 2-2, both losses have come by under a kick, and they showed their class last week by storming away from a gallant Central District late in the match. The Roosters have lost players to the dreaded COVID-19 Heath and Safety Protocols and Round 5 is no different, with young defenders Jamie Parish and Amelie Borg, as well as hard-running wing Julia Clark this week. Fellow youngster Cher Waters is out for the same reason for the Eagles, whilst Chloe Whitington-Charity drops back to Development level for this week.

Coming into the clash are a number of potential debutants. For North Adelaide, netballer Ella Quinn and Broadview’s Zara Molloy both coming in, whilst Port District’s Klaudia O’Neill and Fitzroy’s Bianca Portaro have been added to an extended bench for the Eagles. Expect the midfield battle – which could included a head-to-head between Hannah Ewings and Shineah Goody or Jemma Whitington-Charity one to watch for future talents. The Eagles defence is as experienced as they come with Leah Kaslar and Renee Forth taking on the likes of other AFLW-experienced players in Jade De Melo and Katelyn Pope. Up the other end, Jordann Hickey, McKenzie Dowrick and Jessica Sedunary will look to stretch an incredible defence missing two of its young stars, but the likes of co-captains Kristi Harvey and Erin Sundstrom, and the in-form Ella Metcalfe still there to hold up the fort.

North Adelaide will be favourites for the clash, and can take advantage if Norwood slips up, but one cannot write off the Eagles with all the talent they have across the board, and showed it against Glenelg last week.

The next game in line takes place up north at Elizabeth Oval with Central District having a big challenge up against reigning champions. After a great win over West Adelaide a fortnight ago, the Bulldogs faded against a barnstorming North Adelaide side in the final term to finish the first four rounds with a 1-3 record. Needing a win in the next couple of rounds before the the top four gets further away, the home side will be keen to bounce back against Glenelg. It will be far from easy though, with the Bays welcoming back captain Ellie Kellock for the clash in what could well be the Bays’ strongest side for the year. The Bulldogs welcome back important player Shannon Murphy, with both teams naming extended benches.

Central District has a genuine match-winner in 15-year-old Georgia McKee, and the return of Murphy could allow her more minutes in the midfield. Ex-Eagle Jovanka Zecevic has also been named in the midfield for the first time after predominantly staying forward in her two games thus far. She will lineup alongside the likes of captain Shelby Smith and teenager Lauren Breguet who were both impressive last week. THhy battle against the likes of Ellie Kellock, Tessa Kohn and Piper Window, with Isabelle Starmer clashing with the Glenelg ruck duo of Jess Searle and Matilda Scholz. Since coming into the League side, Samantha Franson has been sensational for the Bays, and will be ones to contain in the front half alongside Caitlyn Swanson (four goals last week) and Chelsea Packer. The Central District defence which features the likes of Laitiah Huynh and Caitlen Teague – who both roll through the midfield – as well as Lauren Smith and Karissa Searle who were impressive last week, makes it another area to keep an eye on.

Glenelg are deservedly favourites for this one, because we know what the Bays will produce for four quarters. If Central District can maintain its best for the full game, then the Bulldogs are capable of anything, it is just about limiting a quarter where they fade out for the reigning premiers to take full advantage.

More than just football will be on the minds of the respective teams when Norwood and Sturt clash at Coopers Stadium on Saturday afternoon. The annual clash between the sides will award the Ellen Maple Medal to the player who is deemed to be the most courageous and determined on the field, in honour of the former Redlegs and Double Blues player who tragically died in 2018. The Redlegs have brought in ex-Eagle Grace Smallacombe for her debut alongside Adrienne Davies for her first game this year. Norwood is in such great form it could afford to send Erika Sporn back to the Development League for some confidence, whilst Steph Simmonds has been managed. The undefeated Sturt will lose important defender Alex Ballard to an ankle injury, and Molly Fletcher to the COVID-19 Health and Safety protocols. They bring in some top-end talent with ex-Crow Angela Foley making her debut alongside Blackwood’s Isabella Drew, whilst Zoe Prowse and Alisha Gepp also return for the Double Blues.

Ballard will be a key loss for the Doubles Blues after a sensational season intercepting anything that came her way. So for Sturt to just causally roll in an AFLW-experienced defender in Foley is remarkable. She fits into a defence that is already sizzling, featuring the likes of Kiera Mueller, Maya Rigter, Lily Whitcombe and Jaimee Wittervan. The Norwood attack did not make the most of its chances last week but still got the job done, something it must change for this game against a Sturt backline that will not give the Redlegs too many easy looks at goal. Alana Lishmund is looking dangerous when the ball is in her vicinity, with young midfielders Lana Schwerdt, Jade Halfpenny and Sachi Syme all capable of hitting the scoreboard when forward. Athletic State Academy member Rosie Boon will have a huge challenge up against Jasmyn Hewett, whilst Morgan Johnston has been named at half-forward, with Shai Hiscock switched to half-back, and captain Alison Ferrall leading the defence again. In Sturt’s attack, the likes of Georgia Bevan, Ally Ladas and Abbey Rigter all hit the scoreboard multiple times last week and loom as dangers.

Sturt is yet to be beaten, so is hard to overlook, but Norwood is in some ripping form since that capitulation at the hands of Glenelg, and would love nothing more than to topple the ladder leaders and go equal top after five rounds.

Both South Adelaide and West Adelaide head into a Saturday night crunch game desperate for a win, with both the Panthers and Bloods coming off three consecutive losses. Since the Panthers took down Central District, and the Bloods won against North Adelaide both in Round 1, neither sides has been able to collect any points since. South Adelaide has the higher percentage, being competitive in every match, whilst the Bloods suffered their most disappointing defeat of the season last round. The formline has been further hurt by being forced to make a massive nine changes, which included four COVID-19 Heath and Safety Protocols, three concussions, a hamstring and a suspension, meaning West Adelaide will have almost half a side that did not play in League last week. By comparison, the Panthers lost captain Brianna Wedding to the knee injury she sustained in the first term last week, and Sarah Wright to a concussion. They have been able to bring back Jaslynne Smith, as well as young talents Brooke Boileau and Alissa Brook, the latter of home is in line to make her debut.

West Adelaide’s roll call of outs include Nicole Hooper, Louella McCarthy and Lucy Boyd, the latter two of whom kicked the Bloods’ goals last week, whilst defender Emma Kilpatrick‘s suspension hurts, and they will be without first choice ruck Kate Walsh (Health and Safety Protocols) and State Academy midfielder Charlie Scutchings (concussion) as well. It means Bethany Sigley will start ruck against Jemma Ellis in a battle of the second choice rucks, though Ellis has been putting out consistent performances the last couple of weeks and really stepping up in that role. With Smith returning for the Panthers, it will help strengthen the defence alongside the likes of Lucy Northcott and Samantha Pratt, whilst Gypsy Schirmer has been named onball. Nicole Campbell will put out a four-quarter effort, with Shae Archbold and Jess Waterhouse the dangers up forward. West Adelaide will look to captain Madison Russell, reigning club best and fairest winner Zoe Venning, AFLW-experienced Beatrice Devlyn and defender Madelyn Zacher for stability, whilst midfielder Keeley Kustermann – who came off late with injury last week – has been named in a forward pocket.

West Adelaide has great depth, but this would be a challenge for any side. Losing that many players from the side would be a nightmare for any coach, and if the Bloods can get up, it would be a memorable win. In saying that, South Adelaide at home and with more stability would be a good chance to pick up the two points here.