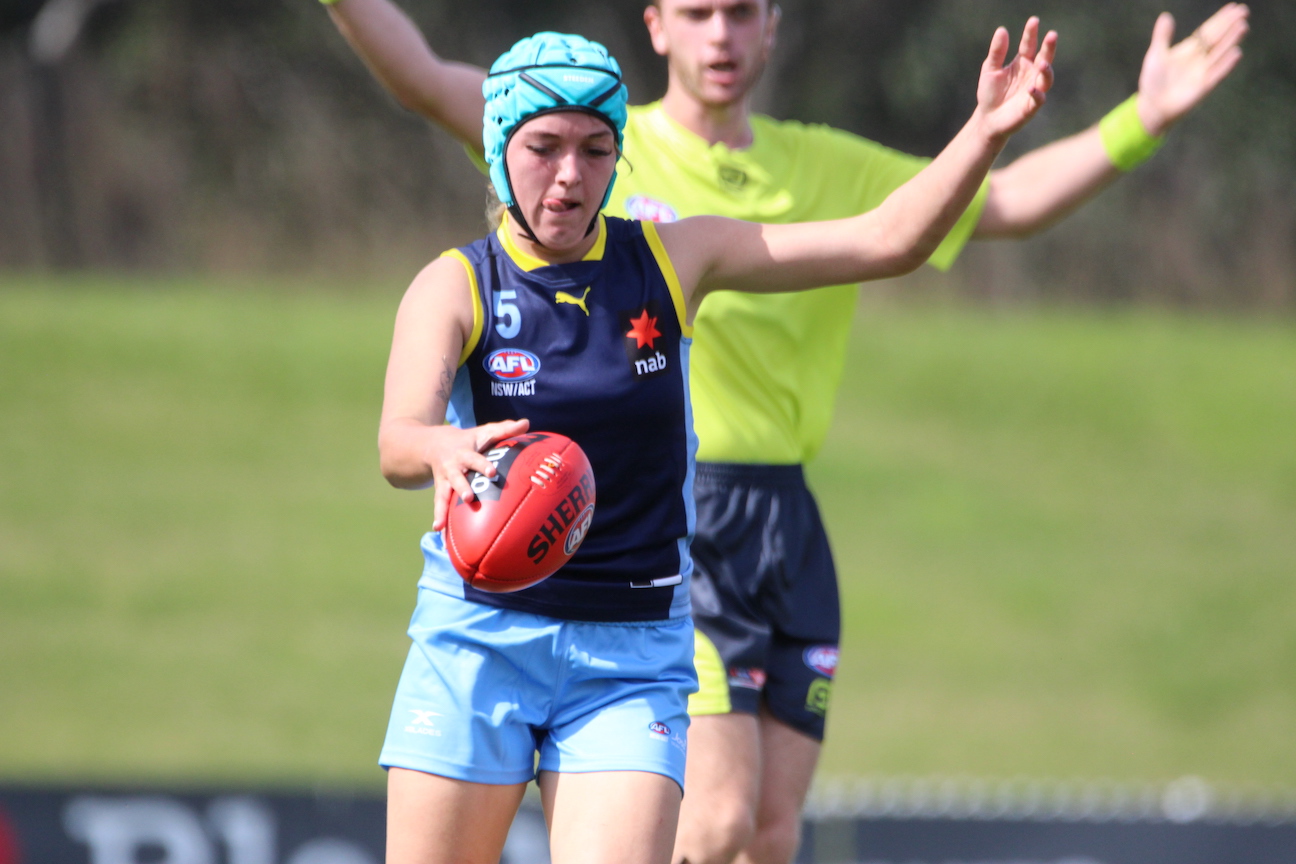 IN a new weekly piece on Rookie Me Central, we hone in on those players to remember for the AFLW Draft, present and future. With four new AFLW clubs joining the competition, spots will heat up, and players will be looking to put their best foot forward. For this piece, we have looked at those players who might not be catching the headlines, but are worth both clubs and fans keeping an eye on. Today’s article focuses around the AFL Women’s Under 18 Championships.

After winning the 2021 AFL Women’s Under 19 Championships Most Valuable Player (MVP) award for the Allies last year as a bottom-ager, AFLW Academy member Cynthia Hamilton returned for what would be just her second and third competitive matches for the year. The Queanbeyan Tigers talent had a massive game for NSW-ACT against the Allies, clearly best afield from her region with 27 disposals, four marks, six clearances, five inside 50s, three rebound 50s and a goal. Then against Western Australia after a slow start, Hamilton finished with 19 disposals, two marks and nine tackle.

The Canberra local has a tough choice ahead coming into AFLW Draft nominations, with the top-ager split between playing in the Harbour City or down in Melbourne. Though Sydney – or in turn Blacktown – might be a closer trip, her sister Alexia Hamilton is on North Melbourne’s list, making it an interesting decision. Still undecided, it is fair to say that Hamilton would be able to slot in at the GIANTS – where she has been a part of their Academy – or down south. Allies and NSW-ACT teammate Zarlie Goldsworthy will be nominating Victoria, with Melbourne closer to Sydney given the Rookie Me Central Medal winner is from Albury on the border.

The AFL Women’s Under 18 Championships was more confirming knowledge than anything else, with the respective stars from each state stepping up and impressing. Top pick Ella Roberts won her second Most Valuable player (MVP) award and had a sensational carnival for Western Australia, justifying her place at the top of the Power Rankings. Similar, second ranked Hannah Ewings was second best at the carnival for South Australia, and the pick of the top-agers for the Croweaters, whilst Alana Gee – though she still has a game left – showed once again why she is the pick of an impressive Queensland group.

Victoria was far more competitive, with a number of players competing for the top spot in the region. Having been ranked sixth overall – third in Victoria – Montana Ham had a ridiculous championships, continuing her back-end season and particularly finals form for the Western Jets. She, Western Jets teammate Charlotte Baskaran and Oakleigh Chargers’ Jasmine Fleming are the three to watch for the top few picks from Victoria. Naturally to round out the other states, J’Noemi Anderson has firmed as the top Northern Territory prospect for this year, with Claire Ransom reaffirming her place as the standout Tasmanian.

Along with affirming thoughts of the top talents, there were plenty of impressive players throughout the championships who increased their draftability with some impressive performance. From Victoria, Northern Knights winger Rylie Wilcox had the freedom to do as she pleased with Metro’s stacked inside midfielder, providing plenty of run and carry on the outside and cementing a spot as one of the Top 20 talents nationwide.

In a similar vein, Jasmyn Smith took her chances with more midfield time for Queensland, remaining in contention for Queensland’s MVP alongside Gee such has been her carnival. Along with Smith, Charlotte Mullins – who has always looked more impressive playing in an outside role where she can use her class – has been a shining light for Queensland.

Elsewhere around the state, South Australian duo Sarah Goodwin and Sachi Syme are among those to impress with good carnivals. Goodwin was already considered on the precipice of our Top 15, but her performances have moved her into that gap, completing her eerily similar rise as Brooke Tonon last year. Syme hardly puts a foot wrong, and is such a reliable player that should be considered in and around that Top 30 mark. Out west, Emily Elkington made the most of a limited chance, missing the first two games due to COVID-19 Heath and Safety Protocols, but came up trumps against the Allies with her elite skills and hardness in equal measure. Size aside – she is 157cm – she is class personified.

As it stands right now, South Australia has the best two players in the country for next year’s draft. Though last year’s MVP Lauren Young missed 2022 with an anterior cruciate ligament (ACL) injury, Shineah Goody took centre stage. In contention to take the overall championships MVP with Ham, Goody was simply sensational across all three games, being amongst the top couple in each of her matches. She and Young will form a deadly duo at next year’s championships.

Prepare for an incredible 2024

It is a while off, but the amount of talent that is coming through the pathways and already playing starring roles in respective leagues is fantastic. Central District’s Georgia McKee had a superb first couple of games at the championships and looms as one of the top stars for that year, with Vic Country’s Lucia Painter simply dominating against her Under 16s peers. If given the chance no doubt she would have caught the eye at Under 18s level as well. India Rasheed also had a great carnival for the Croweaters, whilst up north, Tara Harrington is another one who continues to look a class above, whilst Nyalli Milne has some impressive talent.