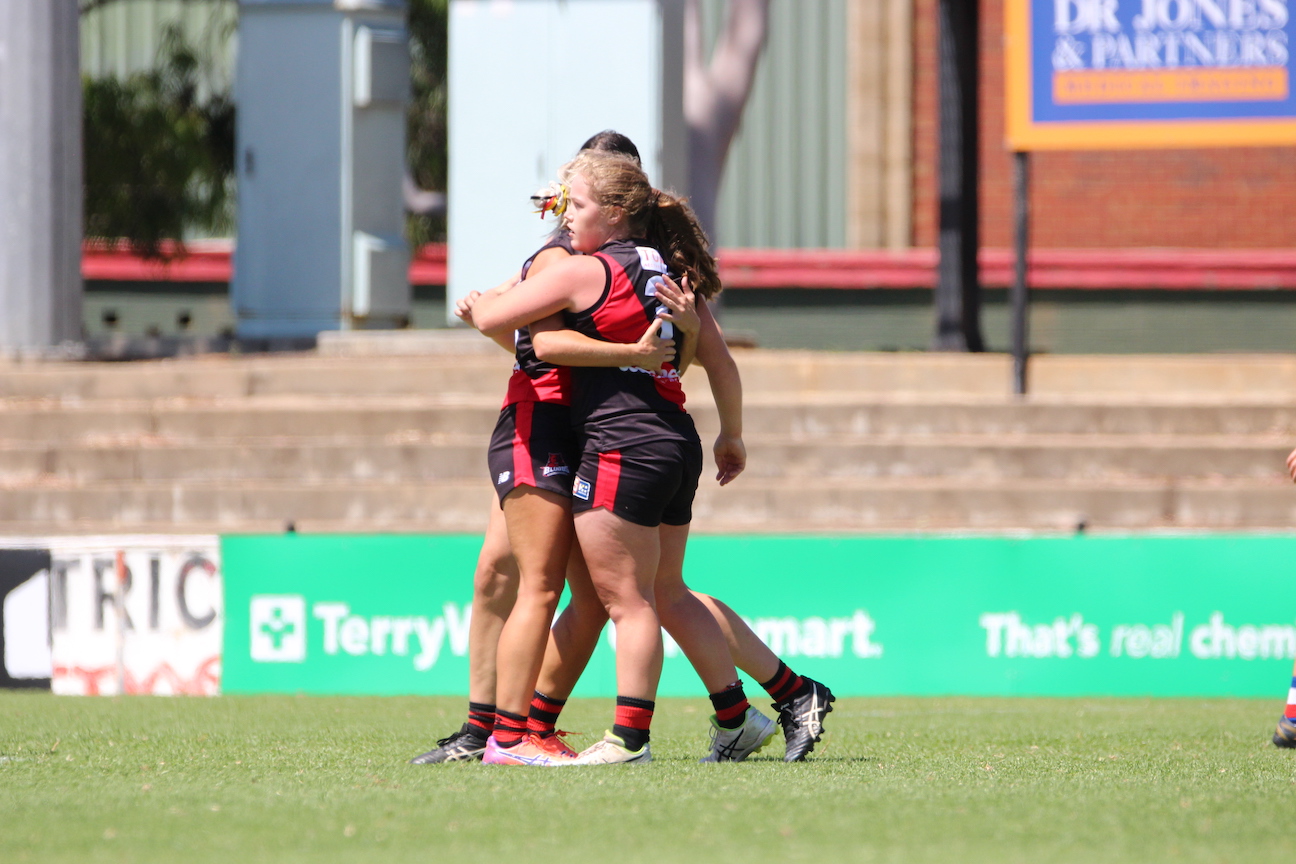 AFTER a week off over the long weekend, the South Australian National Football League (SANFL) Women’s returns for Round 6 to mark the midway point of the regular season. In the 12-round season, teams will be desperate to kick-start the run home and build some form ahead of finals. Two games are played tonight, with the remaining two tomorrow.

A blockbuster clash between two 3-2 sides has plenty on the line when Norwood hosts North Adelaide at Coopers Stadium. The Redlegs come into the clash after a heavy defeat to Sturt, which had followed on from three straight wins. The Roosters have recorded back-to-back victories after starting the season at 1-2, albeit the two defeats coming by less than a kick against West Adelaide in Round 1 and Sturt in Round 3.

Norwood has had to roll out the changes with five players all confirmed outs due to COVID-19 Health and Safety Protocols. Developing talents Molly Brooksby and Shai Hiscock are both out, as are Jiarna Zerella, Isabel Martin and the in-form Sophie Armitstead, whilst captain Alison Ferrall has also been managed. Coming into the side are a couple of debutants in 16-year-old Jazmine Egan and 20-year-old Amelia Rusden. The join the likes of Erika Sporn, Jackson Drake and Steph Simmonds in returning to the side.

North Adelaide has maintained an extended bench with teenagers Jamie Parish and Amelie Borg both back in to support the defence, with tall Jaime Norup, and Rebecca Deer are also back, as Jaimi Tabb (work) and Zara Molloy make way.

The battle of the midfields will be key, with both Jessica Edwards and Hannah Ewings really shining in Round 5, and they will come up against the likes of Sachi Syme and Lana Schwerdt. The in-form Jade Halfpenny and fellow teenager Alana Lishmund will look to overcome the North defence lead by Kristi Harvey, who is surrounded by names such as Ella Metcalfe and Ella Quinn.

This should be a thriller, but with very different approaches as the selection table -outside of Norwood’s control – the match should lead in North Adelaide’s favour.

A second 2021 SANFL Women’s Grand Final rematch is in store for spectators who head down to Hisense Stadium tonight, with the sides in very different form. Glenelg has strung three consecutive wins together since dropping its Round 2 clash to Sturt, whilst West Adelaide is currently on a four-game losing streak. Back in Round 5, the Bloods had double-digit changes after Health and Safety Protocols hit the club hard, and now they bring back some much needed experience with nine chances on an extended bench, including a couple of AFLW-listed players.

West Adelaide regains ruck Kate Walsh, young talents Charlie Scutchings, Emma Kilpatrick and Lucy Boyd for the clash, as well as a couple of AFLW- listed standouts in Madison Newman and Abbie Ballard. Making way for them this week was the likes of Lily Johnston (family), Natasha Christophers, Jessica Chyer and Melanie Elsegood. Glenelg on the other hand had just the two changes, with Samantha Franson (foot) and Lucy Armitage out, whilst potential debutant Marie Marlino joins Crows-listed Brooke Tonon and tall Shay’Lee Dayman as ins for the clash.

West Adelaide will regain some continuity from the returning players, with the midfield bolstered by Ballard’s return alongside Walsh, Keeley Kustermann and Zoe Venning. They will go head-to-head with the likes of Ellie Kellock, Jessica Bates and Tessa Kohn. The Westies defence of Newman, Kilpatrick, Madison Russell, Madelyn Zacher and Beatrice Devlyn looks impenetrable, though both Caitlyn Swanson and Chelsea Packer have been in great form, whilst youngsters Sarah Goodwin, Violet Patterson and Ella Boag will provide run across the ground.

It is hard to look past Glenelg in this one given the Bays’ form, but the Westies have really sharpened up their midfield and defence, so it will be all about finding avenues to win if they are to salute in the clash.

The undefeated Sturt will be out looking to make it six consecutive wins to start the 2022 SANFL Women’s season when it hosts the 1-4 Central District at Thebarton Oval tomorrow. As has been the case all season for sides, the Double Blues hand has been forced by a combination of Health and Safety Protocols and AFLW returns. In-form Kiera Mueller has been ruled out of the clash alongside another teenage defender in Lily Whitcombe, whilst both Zoe Prowse and Jasmyn Hewett have been touted for the AFLW finals series, despite the Crows not having a game this weekend. Kate Harris will also miss due to her own wedding this weekend. Coming into the side is a potential debutant in Chloe Samuel, as well as the likes of Tahlia Walker – who returns for the first time since going down from a big hit against North Adelaide in Round 3 – Isobel Kuiper and Molly Fletcher.

Central District has kept its Round 5 lineup for the this clash, heading in unchanged from the side that went down to North Adelaide a couple of weeks ago. The Bulldogs will look for their midfield to give them a shot, with captain Shelby Smith, Lauren Breguet and Jovanka Zecevic all named in there. Without both Mueller and Whitcombe, the Sturt defence has taken a bit of a hit, so the dangerous Georgia McKee, as well as Demi Sonneman and Laitiah Huynh could be ones who look to get deep and convert. Ruck Isabelle Starmer should do well without the experienced Hewett in there, whilst Caitlen Teague and Shannon Murphy are other reliable players who can help the Dogs cause an upset.

Though Sturt has lost a couple of key defenders – joining Alex Ballard on the sidelines – they do still have AFLW experience in Angela Foley, as well as Hannah Prenzler, Jaimee Wittervan and Maya Rigter back there. The forward line has just been as potent, with the Georgia’s in Swan and Bevan both in good form, and the likes of Abbey Rigter and Ally Ladas capable of kicking multiple goals in a game.

Sturt is deservingly favourite for this game, but the Double Blues defence is just looking a touch more vulnerable than usual, which is an area where the Bulldogs might be able to exploit.

Completing the Round 6 action, South Adelaide will be eyeing off back-to-back wins against a Woodville-West Torrens side that has dropped its past three games. The Panthers are at home yet again, and fresh off a win against an understrength West Adelaide outfit, will be keen to make it consecutive victories to move to 3-3 for the season. The Eagles picked up a win in Round 2 against West Adelaide, but have not been able to convert spirited efforts into premiership points, which is something they would love to do here.

South Adelaide will be without a couple of key ball-winners as Tahlita Buethke (Heath and Safety Protocols) and Nikki Gore (Crows duties) come out the side, with Shannon Hanning (knee) also amongst the five changes. Coming into an extended bench is the experience of Lisa Whiteley and form State Academy member Sarah Wright, whilst Norther Territory local Brylee Kerrin is in line for a potential debut, coming out of the Pinktails program. The Eagles have lost two players, with State Academy members Jemma Whitington-Charity (Health and Safety Protocols) and Marlie Fiegert (omitted) both out of the side. Coming in is McKenzie Dowrick fresh off a Crows AFLW debut, as well as another youngster in Cher Waters and a potential debutant in Chantelle Mitchell.

South Adelaide has a special milestone this week, with experienced midfielder Nicole Campbell being the latest SANFL Women’s player to notch up 50 games. She will look to be a key piece in the Panthers midfield, alongside the likes of Nari Wright and Courtney Barry. The Schirmer sisters – Gypsy and Esther provide some great run out of the back half, whilst Jaslynne Smith and Samantha Pratt found plenty of the ball last week. The Eagles have a stacked forward line with Dowrick rejoining fellow AFLW Academy members Jessica Sedunary and Jordann Hickey in there, whilst young gun Shineah Goody and the in-form Ella Little will look to win the ball from the contest.

This could be the game of the round with both sides needing a win. South Adelaide at home looks a difficult prospect to beat, but the Eagles do have the quality across the ground to get it done.