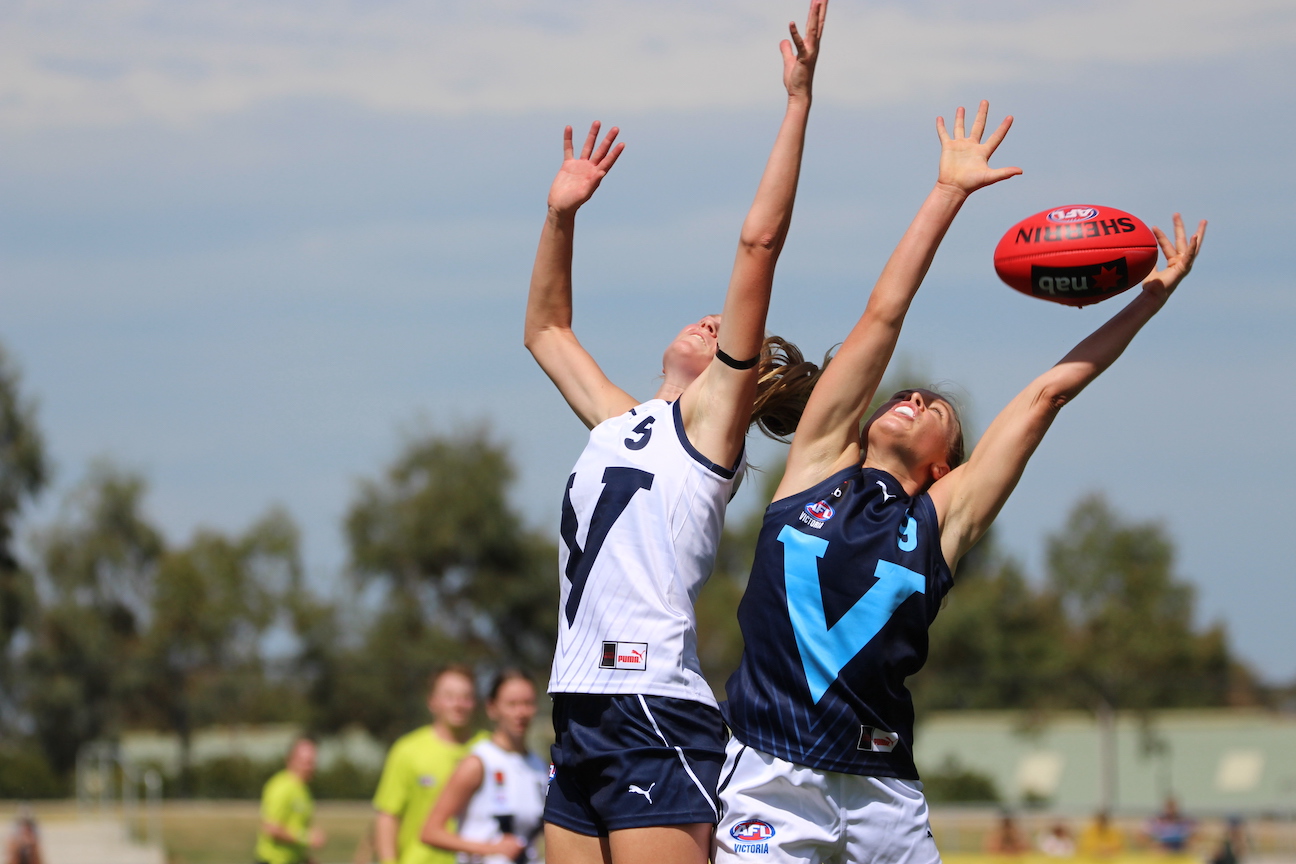 VIC Metro has dominated Vic Country at Mars Stadium to open the official 2022 AFL Women’s Under 18s Championships. In what was set up by a lob-sided first half, Metro piled on the first nine goals of the game, and lead 59-1, three minutes into the third term. Though Country put up a fight from that point on, it was a case of too little, too late, and Metro reversed the result from the previous year to defeat their state rivals, 11.8 (74) to 3.3 (21).

In perfect conditions at Ballarat, both teams opted for two captains, as Western Jets skipper Charlotte Baskaran and Eastern ranges vice-captain Mia Busch tossed the coin for the visitors, whilst Bendigo Pioneers’ Octavia Di Donato and Gippsland Power’s Yasmin Duursma got the nod for Country.

It was clear from early on that Metro would be the team to beat, as they did all the attacking in the first term, dominating the midfield – which was stacked with AFLW Academy members such as Baskaran, Montana Ham, Sofia Hurley and Jasmine Fleming, as well as the ultra-impressive Charlotte Taylor. It was Western Jets forward Caitlin Sargent who scored the first major of the game after slick work from Northern Knights pair Rylie Wilcox and Ava Jordan. She and Sandringham first-year player Zoe Barbakos wrecked havoc in the opening half.

By the time the first siren sounded, Metro had 3.3 on the board before Country had registered a score. The midfield of Taylor (nine disposals), Fleming (eight), Hurley (eight), Baskaran (seven) and Jordan (five) were in total control, whilst Dandenong Stingrays’ Felicity Crank and Bendigo Pioneers defender Emily Everist tried hard with eight and seven disposals respectively. The real difference lay around the stoppages with Metro winning the clearances 10-2, the inside 50s 17-3 and the disposals 90-58 in a serious domination.

The second term went much of the same way despite some early Country chances, with the luck not going the way of the home side. Paige Scott had a flying shot at the goal that went out on the full, Taylah Gatt – who had showcased her usual dash on the wing and being one of Country’s best – got a bad bounce – and even the usually-reliable Mackenzie Eardley and Di Donato were missing kicks they would usually make. The Metro pressure built and built, and, despite Country having five of the first eight inside 50s, they still could not score with the metro defence lead by Laura Elliott and Ava Campbell holding up well.

A turning point in the quarter was a turnover kick from Scott after a great mark, which was taken by Elliott, and she hit up Taylor who found Sargent on the lead. The Western Jets tall nailed her third major of the game, and from that point, it was all one-way traffic. They kicked four goals in the final 10 minutes, with Fleming, Ham and Amelie Smith all adding their names to the goalkickers list. When the half-time siren sounded, it was 53-0 and was becoming pretty ugly for Country.

Fleming had a huge 12-disposal second term to lead all-comers with 20, followed by Hurley (17), Ham (14) and Taylor (13), whilst Sargent and Barbakos had combined for five of the side’s eight majors. For Country, Crank remained busy, with Eardley, Jamie-Lee Speakman and Keeley Skepper trying as hard as they could to put it back the other way.

Coming out from the main break, Country showed a lot more fire in the belly with a better midfield effort to win the first six clearances of the match, and had 12 inside 50s to four over the course of the first 14 minutes. Unfortunately for them, Metro kept touch with them through Barbakos’ third major, and then Smith nailing her second after a horror bounce for Molly Walton landed in the Oakleigh Chargers’ forwards arms and she snapped truly. It was fitting that on her home deck, GWV Rebels’ forward Scott would be the first Country goalkicker, with a celebration to match, whilst Dandenong Stingrays’ bottom-ager Bianca Lyne also saluted. Unfortunately for the home side, a late Bridie Hipwell would mean Metro won the quarter, kicking 3.1 to 2.2 to lead by 58 points.

The fourth term was much of a formality, with it being an armwrestle for the most part, and Country actually winning the quarter with the sole goal in the game. After missing a gettable chance in the third term, Murray Bushrangers’ Cassidy Mailer kicked a consolation major in the 17th minute, for Country to kick a third goal. It mattered little to a Metro side who easily grabbed the chocolates, 11.8 (74) to 3.3 (21).